RMOW in the hot seat

Locals speak out on retail strategy that turns thumbs down to London Drugs
Feb 2, 2007 1:24 AM By: Vivian Moreau 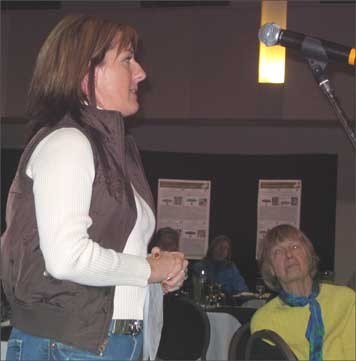 More chairs had to be brought in to accommodate the 200-plus residents and business owners who showed up Monday evening at the Telus Conference Centre to check out the municipality’s retail strategy and comment on whether London Drugs should be allowed in the village.

Whistler council commissioned the retail strategy 18 months ago, after London Drugs made known that it wanted to lease a two-level space in the village that currently includes two high-end clothing stores. The property is owned by Vancouver-based Larco Investments.

Although the main level is zoned retail, the lower level requires re-zoning and council asked staff to examine residents’ and tourists’ shopping habits to determine what shops, if any, need to be added. The resulting draft recommendations were presented to council in December. At that time council said it would defer approval until after the report had been presented to the public. That was the agenda for Monday’s dinner hour open house that included a poster display and presentations by the study’s authors.

The audience waited politely through introductions from Mayor Ken Melamed and municipal senior planner Mike Kirkegaard, who emphasized that the retail strategy is flexible and open to suggestion.

During a 45-minute overview of recommendations representatives from Thomas Consultants supported their arguments for no re-zoning and no new retail space construction. They spoke of cultivating distinct themes for areas of the village with an emphasis on arts and culture events and sprucing up store facades. They also likened Lot 1/9’s potential to that of Vancouver’s Granville Island. The floor was then turned over to what had been a quiet, predominantly older crowd.

As speakers lined up for the microphone audience members alternately cheered and heckled speakers, beginning when resident Don Wensley, who stressed he was not in favour of London Drugs opening up, was heckled when he trashed the retail strategy, saying its recommendations to store owners “was like what they did to the Czar before they shot him.”

But Echo-Marie Fawkes, who has been a Whistler homeowner for 23 years, was cheered when she commented on the incongruity of the study’s recommendations for more outdoor patio space.

“I, for one, who wants fresh air, have to go indoors,” she said explaining that outdoor patios have become places for congregations of smokers.

“We can’t make a decision based on who we like or dislike,” Wintemute said. “We have to make one based on what is practical,” adding his contention that London Drugs would bring residents back to shopping in the village.

Wintemute also suggested that the previous council should have dealt with London Drugs’ application, rather than allowing it to become entangled in the retail strategy.

Winnipeg resident and Whistler homeowner Gail Leach is in favour of London Drugs. Leach said she seeks out the retailer’s one Winnipeg location for its good shopping values and so “why not allow this really quite wonderful store to be here?”

Business owner Scott Carrell pointed out the clash of realities between what really happens in Whistler Village with what planners envision. Pointing out that Mountain Square is a gathering spot for skiers and snowboarders and is surrounded by sports shops Carrell asked planners why they would want to make that area of the village an arts and culture hub, saying the vacant property, Lot 1/9, would better suit that purpose.

London Drugs representative Andrew Pottinger addressed concerns that the retailer would drive small businesses under, saying that the company’s store in Gibsons disproves that theory by bringing in foot traffic that benefits nearby businesses. He also recommended that re-zoning be drafted in such a way so that in the unlikely event London Drugs were to ever leave zoning would allow in another drug store rather than just any retailer.

Long-time business owner Marjory Cheales received the loudest cheers when she pointed out that items called for in the retail study, like more outdoor seating, better signage and storefront awnings, were something business people have been asking the municipality to relax regulations on for years. “We’ve been told to ‘turn off music, close doors, we don’t want activity, it’s too noisy,’” Cheales said.

The municipality’s Kirkegaard said that efforts had been made address some of the points Cheales mentioned and assured the audience their concerns would be taken into consideration. “It’s about trying to strike a balance,” he said, “and we don’t take your comments lightly.”

Staff will incorporate public reaction into another draft of the study that will be presented to council at a yet to be determined date.