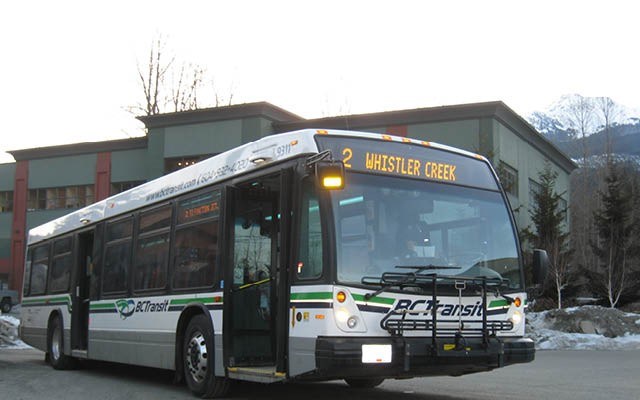 in transit The RMOW is looking to increase transit ridership in Whistler. file photo

For a town of 10,000 permanent residents, Whistler has a robust transit system that services riders nearly 22 hours a day.

Whistler enjoys the highest ridership levels in B.C. in terms of people per bus, and the biggest goal and challenge for the municipal Transit Management Advisory Committee (TMAC) over the next term will be to grow those numbers.

"In my mind, the big project is driving ridership for transit, so it's about considering a number of different ideas," said Jack Crompton, municipal council's appointee to TMAC who was re-elected for a second term on Saturday, Nov. 15.

"My vision is to make some evidence-based decisions around driving transit ridership."

One concept currently being considered is a transit phone app that would track riders' buses in real time.

Crompton said TMAC has lobbied BC Transit to consider adopting the app, but admitted, "there's still work to do."

So far, no work has been done to develop the app, but Crompton said he expects the committee will look at other jurisdictions with similar initiatives in place if the app becomes a real possibility in the future.

The municipality has also bounced around the idea of a subsidized pass system similar to the U-Pass at the University of British Columbia. Students at the school are eligible for a monthly transit pass for $36.75 a month, giving them unlimited access to all bus, SeaBus and SkyTrain services across the region. The cost is automatically included as part of the university's student fees.

Crompton said it's too early to say how a similar system could apply to Whistler, and who exactly he hopes to be eligible for the pass, but added that more details will become available after a presentation from BC Transit on the U-Pass program in January.

Runs will be added on Route 1 Valley Connector, Route 2 Whistler Creek/Cheakamus and the free village shuttles on Routes 4 and 5 on Fridays, Saturdays, Sundays and holidays this winter as well.

Thanks to financial support from Whistler Blackcomb, Gibbons Life and other community partners, a free shuttle will run to staff housing this winter for the first time. Crompton said the move was "primarily a public safety decision" to ensure Whistler Blackcomb seasonal workers get back home safely at night.

Also new this winter are extended hours at the Whistler Transit Centre. Beginning Nov. 15, the office will be staffed seven days a week from 7 a.m. to 5:30 p.m.

Customers can reach a transit employee by phone during that time, by email and for lost and found inquiries, while @WhistlerTransit on Twitter will be active seven days a week.