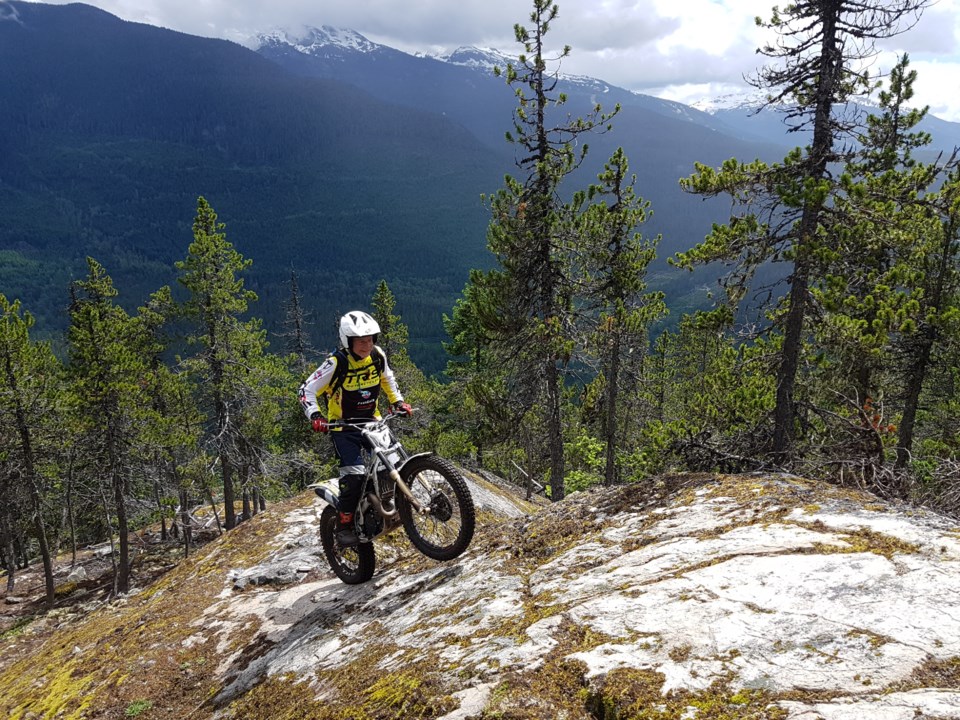 Trials riders hope the Resort Municipality of Whistler keeps them in mind as it maps out the future of trails and recreation in the resort. PHOTO SUBMITTED

Questions about jurisdiction behind Whistler’s Emerald neighbourhood—and whether trials bikes should be permitted in what’s known as the No Flo Zone—are set to be explored through a new Recreation Trails Strategy project spearheaded by the Resort Municipality of Whistler (RMOW).

The question of jurisdiction came up at council recently after competing letters from a pair of user groups: the 99 Trials Association and residents of the neighbourhood.

While residents inferred in their letter that the area is already designated as no-motorized-vehicle zone, it may be more complicated than that.

“There may not be a prohibition on motorized vehicle access in that area, because it’s Crown land. So yeah, stay tuned,” said Councillor Ralph Forsyth, who sits on the RMOW’s Recreation and Leisure Advisory Committee (RLAC), at the July 21 council meeting.

“I think there’s some digging to do to find out whose jurisdiction it actually is, and then who in fact can set the rules, so it’s sticky.”

Asked to clarify, an RMOW spokesperson said the issue of trials bike use in the Emerald area has been discussed at both RLAC and the Trails Planning Working Group, but “the topic requires a larger community discussion as it is applicable to more than the areas between Rainbow neighbourhood and Emerald Estates.”

Further, the Recreation Trails Strategy that will explore the issue (in part—read about the full scope at whistler.ca/culture-recreation/trails/alpine-trail-program) has been delayed due to COVID-19.

Trials bikes—a slow-speed, low-impact, no-seat motorcycle—have been in the corridor for more than two decades, and often get lumped in with dirtbikes, said Andrew DeBoer, director of northern relations for 99 Trials.

“The way we use the trails, the speed we travel, the way our tires turn … it may sound really technical, but it is very different,” DeBoer said.

“So we do a lot less damage … Most of the time you wouldn’t even know we’d been there, because of the way the tire works.”

Many trails originally built by trials riders have been taken over by mountain bikers over the years, and being restricted from the No Flo Zone would be a big loss, DeBoer said.

“[Residents] may not recognize that it’s never going to be a destination. There’s no one coming up from the city to ride that zone,” he said, adding that there are probably fewer than 200 trials riders in the entire Sea to Sky corridor.

“It’s a small little play area, but for those residents in [Emerald and Rainbow] to suddenly lose that … it would certainly be very disappointing, and it would be an unfortunate precedence to have that set, that we would suddenly be written out of that area.”

In his letter to council, DeBoer requested that, if the RMOW is to designate the zone as No Motorized Vehicles, it add an exemption for trials riders (as is the case in Squamish in some areas).

In the view of some Emerald residents, 23 of whom signed their name to a July 6 letter to council, trials bikes are an unnecessary disruption, and inconsistent with objectives stated in Whistler’s Official Community Plan (OCP).

“In fact, you can hear them easily when they are on the trails, even from the homes of a number of Emerald residents,” the letter read.

“An additional disruption from the peaceful use of these trails in a natural environment is the smell of their exhaust, which lingers and is noticeable not just briefly when they pass by.”

Wear and tear on the trails has also been increasing, the letter said, along with attempts to build new unsanctioned trails.

While the bikes aren’t audible from his own home near the highway, some of the trails are “butted up right against the private property of owners,” said Emerald resident Dale Stephens, one of the signatories to the letter.

“It would be difficult to have somebody access those trails, I think, with a motorized vehicle, and not have significant impact on the neighbours,” Stephens said.

“[But] if there are other trails that are further away from the residents, then maybe that could be designated [for trials].”

Further complicating the jurisdiction question—or at least delaying a proper answer—is a land swap between the RMOW and local First Nations as laid out in the recently updated OCP.

Once the swap is official, the RMOW will own the Emerald lands behind the neighbourhood.

The RMOW recently purchased the property at 9561 Emerald Drive for $1.7 million to restore access to the area behind Emerald, and plans to hold a neighbourhood meeting prior to any trail planning or building.

“It is a little bit complicated, so it would be good to get everybody together and figure out where the divisions are, and who has jurisdiction over those different parcels, and see if we can get a coherent policy so that everybody’s clear,” Stephens said.