Council Presentation details past, present and future of housing in Whistler
Oct 4, 2017 6:00 PM By: Braden Dupuis 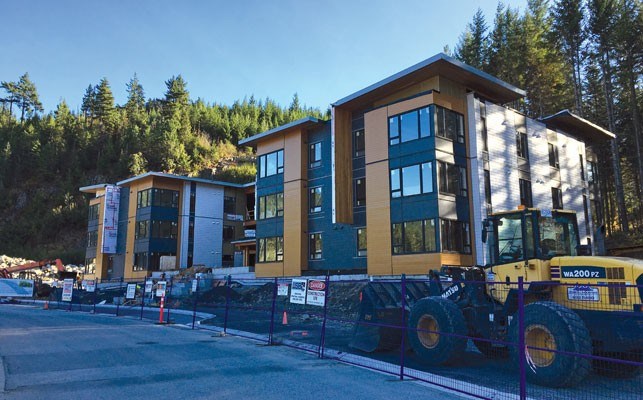 housing burst The Whistler Housing Authority building underway on Cloudburst Drive in Cheakamus. The build is one of four in various stages of development, and a small piece of the Resort Municipality of Whistler's plan to add 1,000 beds in five years. PHOTO by braden dupuis

With a target of adding 1,000 beds in five years, the Resort Municipality of Whistler (RMOW) is preparing new recommendations around housing — and will soon be looking to the community for guidance.

A community forum is scheduled for Thursday, Nov. 2 in the grand foyer of the Whistler Conference Centre to detail four new draft recommendation options.

The recommendations were presented to council at its Oct. 3 meeting.

"I believe we've got some really strong recommendations that are going to make a significant difference to the housing challenges," said municipal Chief Administrative Officer Mike Furey in an Oct. 2 media briefing.

"I'm feeling really good about these findings. I feel that this is one of the most significant things that we've worked on in the last number of years, and I'm hoping the community feels the same way about our result."

In her report to council, economic development officer Toni Metcalf detailed the work done by the Mayor's Task Force on Resident Housing since being formed a year ago, including initiatives already underway and research undertaken to help inform next steps.

HOW WE GOT HERE

Ask any longtime local — in the years following the Olympics, there was more than enough housing to go around.

So after the 2011 municipal election, council's main focus became kickstarting Whistler's slumping economy, which still hadn't recovered from the 2008 recession.

The results have been well documented, with record visitation numbers and the disappearance of shoulder seasons consistently making local headlines.

One result has been more jobs (more than 2,500 created locally in the last five years) and more seasonal residents.

Coupled with a small population boom since 2011 (currently over 12,000 people, up 21 per cent), there are now more people looking for housing than ever before in Whistler.

But Whistler's demographics are changing, too. While the total number of people in the 20-to-29 age group has remained relatively stable, the local 30-to-39 population has seen the biggest growth, growing 33 per cent since 2011.

Over the same time, the total inventory of resident-restricted homes has grown as well.

"Of the 864 new homes in the last 10 years, 618 of those have been resident restricted," Metcalf said. "So there has been a lot of activity ensuring that there has been a growth in available housing as the community has grown."

What hasn't grown at the same rate is dorm-style employee housing for seasonal workers.

"So as seasonal staff numbers have grown, they're spilling further into market rentals, which really (is) exacerbating rental rates," Metcalf said.

In the last five years, the seasonal workforce has grown by about 2,000 full-time equivalents, most of which have gone into market homes.

With more people to a home, seasonals are better equipped to pay Whistler's ever-rising rental rates.

"Whereas they're competing for these homes with our permanent resident families, who may have one or two incomes only," Metcalf said.

"So really the seasonal workforce is adding pressure to the availability and affordability of homes for our permanent residents."

There's also the effect of home sales and demolitions. Metcalf said the community has seen a high turnover of market homes in recent years, mostly between second homeowners.

But as homes are turning over, some owners are choosing to demolish or renovate, putting tenants on the street.

The RMOW counts 187 demolitions over the last 15 years — an average of 12 annually.

"Which doesn't seem a lot, but what we see is that what's being constructed once it's demolished is predominantly single family homes, and they're larger than what they have been in the past," Metcalf said.

"So on average, our homes are getting bigger, which obviously means they're worth more, which means they become more out of reach of our workforce in the future."

The whole concept of the RMOW's housing approach is to alleviate the pressure points in Whistler's "housing continuum" — or the way people move from renting to ownership as their lives change and families grow.

Market homes are fast escaping the reach of families, now worth more than double the cost of resident restricted housing.

"So it's very difficult for those who are currently in resident restricted to make any move out of resident restricted, which means then we have this blockage in our resident-restricted inventory where people aren't actually moving through the housing continuum," Metcalf said.

Rental rates are rising, too.

With a median income of $90,000 to $100,000 per household, working Whistler families in a two-bedroom home are now paying up to half their income on rent alone.

Waitlists at the Whistler Housing Authority (WHA) have grown as well.

Neighbouring communities are witnessing similar growth, with home prices in Squamish growing at a faster rate than Whistler.

"So we have, on one side, seasonal residents putting pressure on rentals, (and) we have the lack of affordability to buy, which is really causing everybody in the middle to be financially pressured," Metcalf said.

"There's some areas that we need supply, but on the other hand we have lots of single-family homes, but they're just out of reach, they're just not affordable.

"So it's not really a supply issue, it's an affordability issue... our primary objective for housing is about and has always been about ensuring an appropriate, affordable housing supply for both permanent and seasonal staff, but we need to create flexibility and diversity in the housing that's available."

WHAT'S BEEN DONE SO FAR

Initiatives out of the Housing Task Force to this point have been focused on "quick wins" and "early deliverables," while at the same time being sustainable in the long term.

On illegal nightly rentals, 53 homes have been reported so far this year, 37 of which have stopped renting short term and 16 of which are still under investigation — the RMOW estimates 100 beds have been returned to the rental pool as a result.

The bylaw has had an impact, Metcalf said, noting that 33 of the complaints came after it was introduced in July.

The RMOW monitors short-term renters after the fact as well, to ensure continued compliance.

At least two homeowners have been fined $1,000 for non-compliance so far.

The Home Run program, implemented in December, has added homes for 30 employees.

One of the four new WHA builds will be open this winter, while two more will be ready in winter 2018 and the last in winter 2019.

The four builds "will deliver approximately a 50-per-cent increase in WHA rental units, and that's quite a significant increase," Metcalf said.

"It will help address the rise in waitlist for both rental and ownership."

HOUSING SOLUTIONS FOR THE LONG TERM

All of the work undertaken by the Housing Task Force and RMOW staff to this point has led to this — the potential for long-term, sustainable housing solutions in Whistler.

With its new draft recommendations, the RMOW hopes to achieve just that.

With the proposal to expand the infill program, the RMOW is targeting both existing and aspiring homeowners.

"It means we're looking at considering additional infill options, including the ability to stratify," Metcalf said, adding that the idea is to expand the infill option to all neighbourhoods throughout Whistler, rather than just Alpine South, where it currently stands.

The proposed policy would offer different options for homeowners: adding an attached or detached suite; adding a duplex that caters to multiple families; or subdividing lots for the creation of a secondary home.

"The recommendation is for any of these types to be stratified, which would be a new element, because you currently can't stratify suites in homes, creating additional new resident-restricted homes," Metcalf said.

The RMOW estimates the policy could create up to 50 new resident-restricted homes across Whistler.

"We're looking at this being support to address some of the loss of market residences, so where single family homes are becoming out of reach or being built to be too large, what can we do to protect the remainder that haven't yet got there?" Metcalf said.

It also gives more options to Whistler's aging population — boomers who may be looking to retire and stay in the community.

"This gives viable staying options, whether they liquidate some of their equity by subdividing, or whether they look at generating rental revenue stream to manage the rising cost of being homeowners."

By allowing for development of resident restricted rentals on private lands, the hope is that more employers and developers will step up to the plate to add more beds for seasonal staff.

"We believe it would also negate some of that demand on market rentals to help out permanent residents, and it would give more of the long-term security of affordable rental homes for our permanent resident workforce," Metcalf said.

The underlying key to it all is tightening the eligibility around resident-restricted housing, increasing monitoring and enforcement for abusers of the system and freeing up the "blockage" in Whistler's housing supply.

The aim is to exclude owners of market homes looking to sell and move into resident restricted and households who are not working fulltime in Whistler, as well as "non bona-fide" and self-employed individuals.

There would be punitive penalties for WHA offenders, and the establishment of an income/asset verification framework to monitor how the stock is being used.

"The expectation is that most of Whistler's workforce who are currently eligible employees will continue to be eligible, it's about tightening it to reduce leakage," Metcalf said.

In terms of building its own housing, in addition to the four builds already underway, the RMOW is in the early stages of a master-planning exercise for Cheakamus Crossing — no set number of beds is attached to the idea just yet.

"It's a multi-pronged approach to alleviating the pressure points around the housing continuum," Metcalf said of the draft recommendations.

But at the same time, the RMOW must remain wary of the ever-present external trends.

Short-term growth in both the national and provincial economies is expected to moderate, Metcalf said, and tourism "across the board" is expected to follow.

"Overall, there's quite a lot in the recommendations that will deliver significant additional resident housing for the community, but we just need to be conscious that we also need to monitor this, because we know there's ups and downs in an economic cycle," Metcalf said.

"We're currently, I would suggest, at a peak, or close to it, and we need to ensure that we do monitor, so that the timing and the phasing of future developments are based on the need of the community."