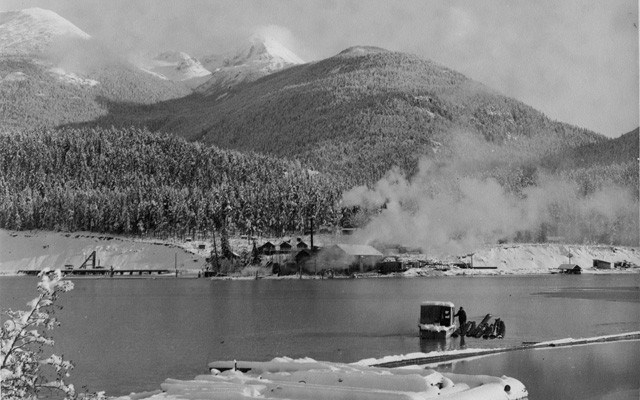 legacy lands The RMOW has amended its budget in order to purchase 81 hectares of green space, known as the Parkhurst lands, on the north side of Green Lake. image scan courtesy of the Whistler Museum and archives

The Resort Municipality of Whistler (RMOW) is about to acquire a historic piece of waterfront property.

At its March 21 meeting, Whistler council gave first three readings to a 2016-2020 Five Year Financial Plan Amendment bylaw that would free up $6,503,000 for the purchase of 81 hectares of waterfront green space on the north side of Green Lake — otherwise known as the Parkhurst lands.

The RMOW has entered into a purchase agreement for the lands, subject to adoption of the amendment on April 11.

In a phone call ahead of the meeting, Mayor Nancy Wilhelm-Morden called the acquisition "historic."

"Parkhurst was the location of a very successful sawmill dating back to 1923, and in the '30s '40s and '50s it was the largest settlement in Alta Lake, as Whistler was known at that time," she said.

"There was a small store there, there was a school, there were 60 to 70 families who lived there, and there was also the Soo Valley Lumber company, which was established close by in the 1950s."

The lands were also the site of the second incarnation of Toad Hall, and one of Whistler's most iconic photographs.

"It's the same Toad Hall as the one with the photograph with all the naked people, of which I am not one," Wilhelm-Morden emphasized with a laugh.

In his presentation to council, general manager of resort experience Jan Jansen noted the land went up for sale on Jan. 27 at a price of just under $8 million, and immediately caught the eye of the RMOW.

"The acquisition of the property is consistent with the municipality's interest to manage key areas of land within the community, specifically as it pertains to retaining green space, developing parks and recreation opportunities, and with Parkhurst, of course, the historical significance of the site."

There are currently no plans to develop the site, and no urgency to make plans for its use.

"It will be retained as parkland," Wilhelm-Morden said. "We don't have any intention of developing it, but it's always good — if we're able to — to acquire green space when it comes up, and really what we're doing in this case is exchanging an asset of reserve monies for an asset of land."

The Recreation and Leisure Advisory Committee (RLAC) will discuss how to use the land, and a community meeting will likely be held to gain public input on the planning process.

"There's no urgency. It's been sitting there vacant for decades," Wilhelm-Morden said. "We wouldn't be putting any water or sewer services into it, because it is at the far end of Green Lake, and it is somewhat remote. To service it would be extraordinarily expensive, so it's going to be low-key parkland for the foreseeable future."

The RMOW wouldn't say who the previous holder of the lands was, other than it was a group of private investors.

An online listing for the lands lists it at $7,995,000, and describes it as "prime real estate that is zoned for the future development of three estate homes."

"We looked at the assessed value, we had an appraisal done, we had an experienced real estate agent acting for us, so I'm personally satisfied that we've got a fair price," the mayor said, noting that she hopes the purchase won't result in another discussion about the money being better spent elsewhere.

"It's not a case of an either/or situation," she said.

"We're proceeding forward with housing initiatives in a very serious way, and this purchase of parkland will in no way prevent us from pursuing housing as well."

She's also not worried about the state of the municipality's general reserves, from which the majority of the $6,503,000 purchase price will be funded ($6,574 will come from the Parkland reserve).

"We have applied for grants from various levels of government for some of the projects that are going to be funded from reserves," Wilhelm-Morden said.

"We are proceeding in a prudent manner, and our reserve levels do ebb and flow over time, so I'm satisfied that we are not putting anything at risk."

"This is a crowning piece for the career of anyone at the hall who was involved. Council and staff, good work, great foresight. Thank you, you should be proud," wrote one user.

"An amazing asset for the future. In favour," said another.

Comments from the council table were similarly glowing.

"I think this is going to turn out to be a wonderful asset for the community," said Councillor Andrée Janyk, noting that acquiring usable, waterfront parkland has been a recurring topic for the RLAC.

"This will be a legacy that Whistler appreciates for a long time," he said.

"It ticks all the boxes for me: Environmental, historical, fiscal, community — it's all there."