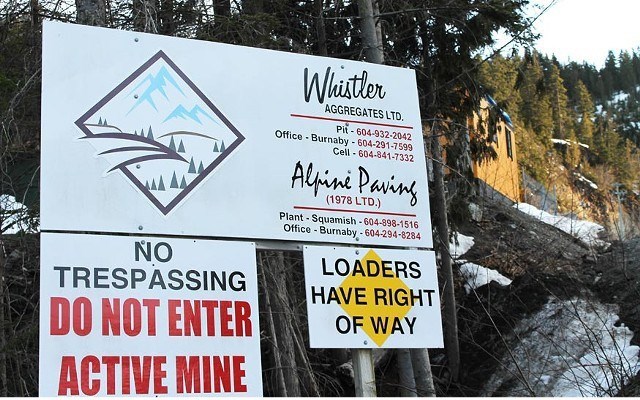 The Resort Municipality of Whistler (RMOW) passed a motion earlier this month to sign a partnering agreement with Alpine Paving.

Under the agreement, Alpine Paving has committed to making safety improvements, including reducing noise and airborne particulate matter along the access road to the gravel quarry, in order to address concerns from residents in the nearby Cheakamus Crossing neighbourhood. Some of that work already took place throughout the summer, council learned during an Oct. 6 staff presentation. Earlier this year a pedestrian crossing was added at the trailhead for the popular Train Wreck hike as well.

“We’re stuck with this situation for a while, until the licensing agreement comes up for renewal,” Councillor Cathy Jewett said during the meeting. “I think that this is a really great way to work with the provider and also address the concerns of the residents.”

During the presentation, Tammy Shore, capital projects manager with the RMOW, outlined discussions she had with the vendor and some of the work they undertook this summer.

Part of that was the construction of a screening berm at the back of the Cloudburst Drive apartment building. “The intention of that berm is to create a screening mechanism, which will be planted with hydroseeding, but to work on screening for dust and noise and visuals from the Cheakamus Crossing area,” she said.

Earlier in the season, Alpine Paving also paved the entrance to its quarry with the aim of reducing dust and noise in that area, “which is quite busy with many vendors going in and out of that tenure,” Shore added.

The budget consideration for the work would be $45,000 included in the 2020 and 2021 road reconstruction work, with Alpine Paving paving the entrance to the quarry “at no profit to themselves,” Shore said. “So the cost was reduced by about 15 per cent. As I understand, the market value of the asphalt would be closer to $50,000 and the total cost of that 150-metre-long stretch is about $34,000, and then the berm itself is around $4,000.”

Council originally directed staff to explore the partnering agreement with Alpine Paving at its July 21 meeting, when it also authorized a contract with the company for the Whistler Road and Trail Reconstruction Project to the tune of $508,495. The formal agreement is necessary to allow the RMOW to work on any safety upgrades, otherwise it could be seen as assisting a business.

Dating back to 2011, council has directed staff to restrict sourcing asphalt from facilities that are located within three kilometres of Whistler neighbourhoods. That meant Alpine Paving has had to source its asphalt for municipal work from its Squamish plant rather than the one in Cheakamus.

That has generated 270 tonnes of CO2, adding up to between two and five per cent of the municipality’s corporate emissions (equal to the annual output of about 55 passenger vehicles).

Noise, dust, traffic and other issues from the plant have been a persistent problem for years, according to Cheakamus residents.

Under the new partnering agreement, the project team will complete an assessment on where the current air quality monitoring station is located—and decide if it should be relocated or a new station should be installed, after residents have contended that its current site doesn’t paint an accurate picture of the dust particulates in the air.

Resident Denis Ebacher said while most of the changes are merely Band-Aid solutions, he is hopeful the partnership could result in future improvements—namely moving the quarry.

“Hopefully the goal is to enter a great relationship where they can negotiate properly and have it move somewhere or find a way to help [the company] because there is a cost to this,” he said. “Right now, it’s Band-Aids and showing they’re trying to do something. We’re still dusty, people that live at the buildings at the bottom [of the neighbourhood], they can’t open their windows; there’s dust in five minutes. It’s just brutal.”

During the meeting, Coun. Duane Jackson thanked staff for addressing some of these issues through the summer.

“Thanks to staff for engaging pretty immediately and maintaining a positive working relationship through the summer and carrying on the monitoring so that we can hopefully see some improvements in the neighbourhood,” he said.