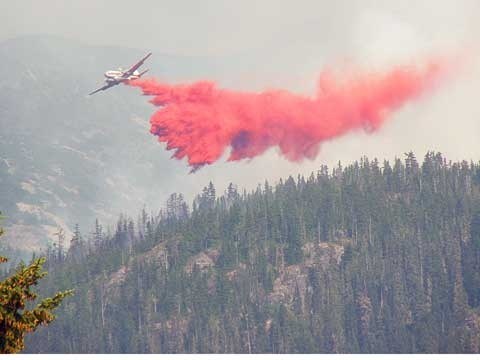 The forestry operations currently underway in the Blackcomb Benchlands are part of a fire hazard reduction strategy, and not old growth logging in our community forest - that's the message from the Whistler Fire Rescue Services.

All of the oldest and largest trees in the area will be left in place, with crews primarily removing tightly packed smaller trees that represent a huge amount of easily burned fuel in the result of a fire.

"This is not logging by any stretch of the imagination," said fire chief Rob Whitton on Wednesday. "This is a wildfire thinning program that we've had in place for six years, and this is one of the most sensitive and largest areas we've moved into so far."

Whitton says the program will modify fire behaviour, reducing the amount of fuel in the forest while creating more room for firefighters to work. It also assists helicopters and planes dropping fire retardants on the area in the event of a fire.

"With the amount of fuel in these areas now a fire would be virtually unstoppable from the ground," said Whitton. "The only thing we could rely on would be air support and even then, given the fuel load - there's a question whether even tankers would be able to stop the spread of the fire."

Similar thinning projects have been applied to Lost Lake Park, Kadenwood and other areas around Whistler that have a history of logging - but predate provincial requirements to manage the forest after the fact.

The side benefit, says Whitton, is that the thinning also allows natural undergrowth such as bushes and ferns to return, and creates more habitat for wildlife. Right now trees are so close together that animals can't even move through the area.

There are patches of old growth trees in the prescription area, but none of those trees will be cut. Older trees are more resilient to wildfires, says Whitton, and the canopy they create prevents the accumulation of fuel on the forest floor.

The project got underway in the Benchlands area on Sept. 13. Thinning will be conducted by a contractor on behalf of the Resort Municipality of Whistler, as part of Whistler's wildfire management strategy, and will continue until snowfall this year - then recommence in the spring.

The prevalence of forest fires in British Columbia this past summer highlights the need to manage fire risks in forests surrounding communities such as Whistler, according to a RMOW press release. Tree thinning is a key strategy recommended in Whistler's Community Wildfire Protection Plan and is intended to reduce the volume of woody fuels in or close to populated areas, so Whistler's fire protection efforts can be more effective.

The forests targeted are primarily the dense, second-growth forests, which occur throughout much of the valley bottom.

Funding for tree thinning is provided by the Union of B.C. Municipalities and the Province of B.C. as part of their efforts to protect life and property throughout the province.

The reasons for tree thinning are:

• to limit the ability of the forests to sustain a crown fire (A crown fire is a fire that moves unimpeded and with great speed along the tops of the trees. Thinning opens the forest canopy by removing smaller trees, so the forest is less likely to support a crown fire.)

• to reduce surface and ladder fuels (i.e. branches and small trees that could otherwise allow a fire to move along the forest floor or act as a ladder up to the forest canopy).

Some large pieces of wood (over 30 centimetres) are left on-site to help provide habitat for a variety of animals. Thinning this way helps accelerate the forest back to old-growth conditions and increases light to the forest floor. By thinning forests, fire risks are reduced and wildlife habitat and biodiversity opportunities are increased.

The Benchlands thinning project includes the dense forest above developed areas in the Blackcomb Benchlands. This area includes a water reservoir, access roads to Blackcomb Mountain, and the Roam in the Loam bike and horse trail, and is bound on the south by the ski run adjacent to the Coast Blackcomb Suites and on the north by Horstman Creek.

Thinning will occur between the property boundaries on the downhill side, and extend uphill approximately 200 metres.

Through thinning, the average spacing between trees will be four to six metres, and virtually no branches or other fire fuels will be left on the forest floor. Openings in the canopy will allow light to reach the forest floor, which will encourage the growth of understorey vegetation. Over the next few years, the moss, herb and shrub layer will respond to this additional light.

Tree thinning operations will be limited to daytime hours, Monday through Friday. Trails and roads may be temporarily closed during these hours and detours will be provided.

Tree thinning in Whistler began with a small trial in Lost Lake Park in 2004. It expanded in subsequent years to include the main trail network through the park. In 2009, thinning occurred for the first time right at the interface between developed and forested areas in Kadenwood. Thinning of approximately five hectares on either side of Kadenwood Road was completed in May 2010. The Kadenwood thinning project removed approximately 140 large bins (750 tonnes) of wood from the site. The wood was trucked to the Whistler composting facility and contributed almost six weeks of wood supply for the composting process.