Road will remain rocky for now

Lillooet mayor takes Transportation Minister on tour of highways, but gets no promise for improvement
Jul 27, 2007 2:53 AM By: Holly Fraughton 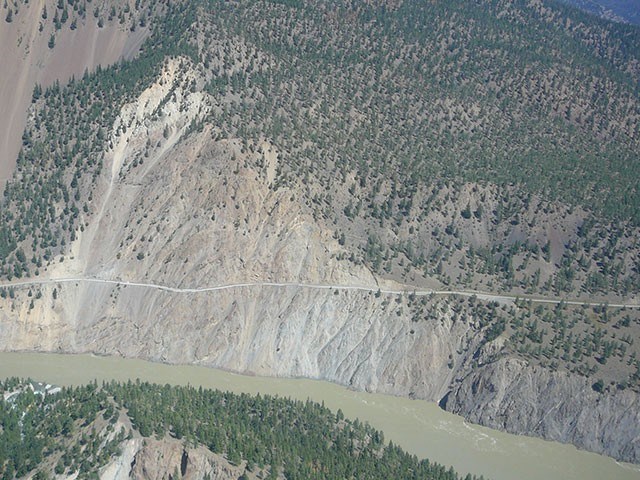 The issue of road safety in the Squamish-Lillooet Regional Dstrict has been taken to new heights — literally.

Originally, Falcon was scheduled to meet at Lillooet’s municipal hall to discuss council’s concerns over road safety in the area, but Roshard didn’t think the sit-down would give him a clear picture of what conditions in the area are really like.

So she arranged for a two and a half hour aerial tour, followed by a drive over the Duffey Lake Road, so Falcon could see for himself how poor conditions are for commuters and tourists.

The tour focused on three main stretches of road that lead to Lillooet — the Duffey Lake Road, Highway 12 and Highway 99 North of Lillooet.

Or as Roshard sees it: the “Northern gateway to the Olympics that is falling apart in chunks and pieces.”

The Highway 12 section — commonly referred to as the Big Slide at Texas Creek — has been an ongoing concern in the area.

“It’s a huge safety issue,” said Roshard. “The slide came down three or four times last year during the winter — huge rocks — and it was closed at one point for about three weeks.”

The alternate route, through Fountain Valley, is single lane in many areas and very dangerous. Two major car accidents occurred on this stretch of road while Highway 12 between Lillooet and Lytton was closed.

“These are not new problems,” said Falcon. “The Texas slide’s been a problem for 50 years, so this is an issue that governments have struggled with for decades, and we’re just the latest.”

Roshard said the province simply isn’t willing to spend money in the area because the traffic isn’t high enough to warrant the expense.

Traffic counts show that 600 to 1,000 people travel that stretch of road each day, which is low by provincial standards.

But with the Olympics approaching, Roshard said the regional district is hoping the Big Circle route — which stretches up the Fraser Canyon to Lillooet and back down Highway 99 to Vancouver — will get an overhaul to make it safe for commuters and tourists.

Despite Tuesday’s tour, Falcon said they already have invested a significant amount of money in the area, and aren’t planning any immediate work on these roads.

“I thought the tour was very valuable,” said Falcon. “But as I reminded the mayor, I made a $40 million commitment on the Duffey Lake Road — one of the largest financial commitments in at least a couple of decades — to replace all the bridges along there.”

Roshard said about two years ago, the ministry announced plans to replace seven one-lane bridges in time for the 2010 Olympics, but so far, work hasn’t started.

Falcon attributed delays to negotiations with First Nations, and said he is hopeful that work on the bridges will start soon.

And while he recognizes there is room for improvement on other highways, Falcon said he doesn’t believe safety is an issue.

“I don’t think it’s an unsafe road by any stretch of the imagination,” said Falcon.

“I think like many roads through British Columbia — which is really challenging terrain — we have to drive responsibly and carefully.”

Falcon did say that there are some short sections of highway he plans on taking a closer look at, but points out that many areas would require more than simple repaving.

“I suspect there are some subsurface issues there that we’re going to have to get our heads around,” said Falcon. “It’s probably going to be a more expensive fix than most people think.”

In the short-term, Roshard would like to see a warning system implemented in the Big Slide area, so commuters can be aware of the danger. Eventually she would like to see the government make a bigger change in the area.

“Long-term, I think the Ministry of Transportation has to invest in this area, and they may have to make an initial investment that’s quite large,” said Roshard.

She believes the tour was effective, and is satisfied that the ministry will be doing further study in the area.

“…While they may not be putting resources into digging in the dirt right away, they’re certainly putting geotech resources and planning resources to these problems.”

Falcon plans to return to Lillooet for a town hall meeting in October to discuss warning systems and potential longer-term solutions.