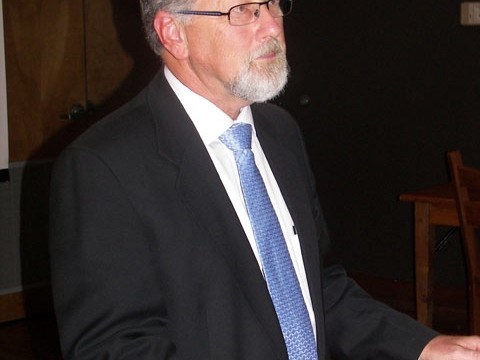 Finally, someone has declared they want Squamish's top political job.

Councillor Rob Kirkham announced this week that he intends to replace Mayor Greg Gardner, who is stepping down.

"We need to create home grown jobs," said Kirkham at his campaign kick-off at the Howe Sound Inn.

"It would be great if we landed a large employer but the most significant driver of the Canadian economy is small business. The District of Squamish must do all it can to help existing small business to grow and prosper. Our education sector, with Quest and Cap U is already a contributor to our local economy and yet there remains significant opportunities for growth in this area."

Kirkham also told the crowd of supporters gathered at his announcement that if he's elected he would take early retirement from his bank branch manager job.

He committed to working with development companies to start construction on the Squamish Oceanfront lands as soon as possible and said he wants an innovative and efficient transit system for the community.

Kirkham said he would be respectful, collaborative, inclusive and ethical while working with empathy and integrity.

Kirkham wasn't alone in announcing this week; Squamish local Balvinder Biring has thrown his hat into the ring for a position on council.

Amongst the supporters at Biring's campaign launch was outgoing councillor Paul Lalli.

Biring identified the local economy as one of his top concerns and called on new residents to unite with old Squamish to work together.

Late last week, the former manager of the Interfor lumber mill in Squamish also announced his intention to seek a council seat. Ron Sander came into the race promising to retire the Squamish Oceanfront Development Corporation and create a port corporation so the lands can be leased to port-oriented companies.

Also seeking a seat on council is Eric Andersen who announced Oct. 4. Andersen is a research and communications consultant who has worked in the forestry and transportation industries. He has volunteered for many community organizations and projects with environmental, cultural and recreational interests.

"I must admit to impatience with aspects of district land use planning and economic strategy, although some good efforts are being made," Andersen wrote in a news release.

The race for the board of education finally became a race this week with Bianca Peters announcing her intention to campaign for one of Squamish's two school trustee seats. Incumbents Andrea Beaubien and Rick Price both confirmed their intentions to seek re-election last week.

Peters has been vocal about issues around bullying in the school system.

And the regional district Area D representative, Laura Godfrey, announced this week that she will seek re-election.

Two candidate debates have been announced for Squamish. The Chamber of Commerce is working on an all candidates meeting planned for the Brennan Park Recreation Centre on Monday, Nov. 7.

Cliff Miller of SORCA said his organization would also hold a candidate meeting on Wednesday, Nov. 9 at the Sea to Sky Hotel.

Miller said any outdoor recreation group is welcome to participate by asking two questions of the candidates.

"If there is any time left after the questions from the groups then questions will be taken from the floor," said Miller.

Squamish residents will elect six councillors and a mayor on Nov. 19. Advance voting opportunities are set for Nov. 7, 9, 12 and 16.

To date, no candidates have declared their intention to seek election to represent Area D on the Squamish-Lillooet Regional District board.