Veteran actors premiere films at WFF as it celebrates its 15th anniversary
Nov 13, 2015 6:15 AM By: Cathryn Atkinson 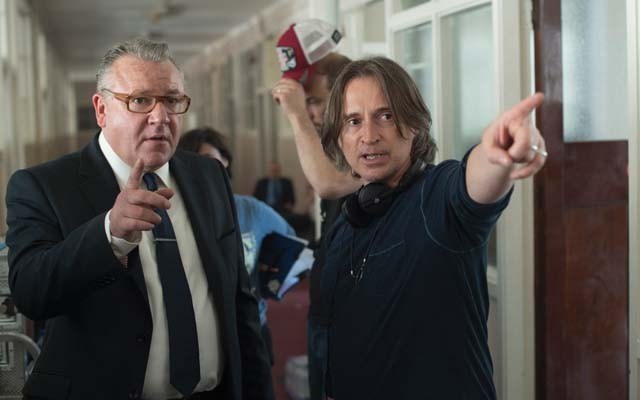 Robert Carlyle (right) is coming to Whistler with his directorial debut The Legend of Barney Thomson . Here he works with co-star Ray Winstone. Photo submitted

Carlyle — famed for his roles in Trainspotting, The Full Monty and his current role as Rumpelstiltskin in Once Upon A Time — is being honoured by the festival with the WFF 2015 Maverick Award.

He is screening his feature film directorial debut, The Legend of Barney Thomson, in its North American premiere in Whistler.

The film stars Carlyle, along with Emma Thompson, Ray Winstone and Tom Courtenay. It is the story of a hapless Glaswegian barber who is suddenly drawn into the life of a serial killer.

He will be In Conversation on Saturday, Dec. 5.

And U.K.-born Canadian actor Sutherland is the recipient of the Whistler Film Festival Tribute — Trailblazer in Acting Award. He is known for his work in The Lost Boys, 24 and Flatliners.

Sutherland stars alongside his father Donald and Demi Moore in the western Forsaken, which gets its Western Canadian debut at WFF. It is also one of the nominated films for the festival’s Borsos Award for Best Canadian Feature.

Sutherland will be In Conversation at WFF on Friday, Dec. 4.

Coincidently, his brother Rossif Sutherland is also in competition for the Borsos Award; he is coming to Whistler with his film River, which also gets its Western Canadian premiere.

“And three Sutherlands are battling it out (for Borsos awards), basically for best performance.”

She adds that 20 films will compete for the Borsos Award for best Canadian film in 2015, up from the previous number six, after WFF opened it up to all films that are Western Canadian premieres.

The winning film gets $15,000 — the second highest cash prize in Canadian film — plus $15,000 in post production help from Encore.

The festival celebrates its 15th anniversary in December.

Tickets and passes for WFF can be purchases at www.whistlerfilmfestival.com.

For the full story, including the names of Variety’s 10 "Screenwriters to Watch", read the next issue of Pique Newsmagazine or visit www.piquenewsmagazine.com on Thursday, Nov. 12.