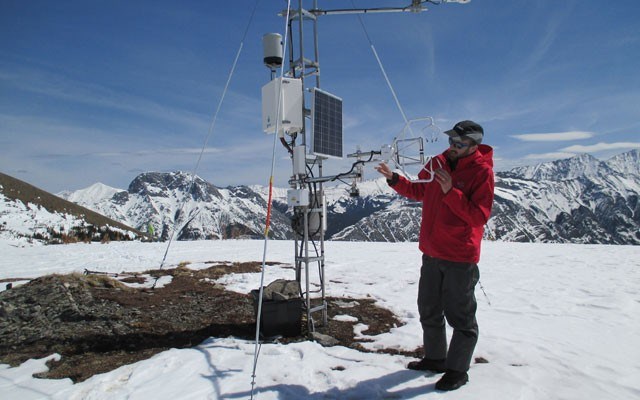 watershed moment Dr. Jonathan Conway collects data from a University of Saskatchewan Centre for Hydrology research site at Fortress Mountain in Kananaskis Country. The centre is at the roots of an international network through which scientists share mountain watershed research data. Photo BY lynn martel

An international network for scientists conducting water-related studies in alpine environments around the world, which has its origins in the Canadian Rockies, was recently accepted by the Global Energy and Water Exchanges (GEWEX) Hydroclimate Panel.

This endorsement, said Dr. John Pomeroy, the Canmore-based Canada Research Chair in Water Resources and Climate Change and director of the University of Saskatchewan's Centre for Hydrology — and project leader — means that the International Network for Alpine Research Catchment Hydrology (INARCH) is globally significant.

"The acceptance of INARCH as part of GEWEX means that a core project of the World Climate Research Programme that deals with water and climate has recognized INARCH as having global significance and is incorporating INARCH as part of its main activities," Pomeroy said.

The World Climate Research Program (WCRP) is a joint program of the World Meteorological Organisation, the International Council for Science and the United Nations Educational Scientific and Cultural Organisation (UNESCO). The inclusion of INARCH in GEWEX brings with it some core support for workshops and central INARCH activities, as well as contributions toward research activities.

Through the formalized INARCH network, researchers collecting data in mountain watersheds around the world are able to compare instrumentation best practices, suggest improvements in instrumentation, and develop reliable alpine datasets for the testing of computer models and numerical experiments.

"Involvement with GEWEX also means they will provide us the best atmospheric weather and climate model outputs from a variety of countries that run these models on an experimental basis, so that we can demonstrate that if we understand mountain snowpacks and glaciers and hydrological processes then we can better predict mountain streamflow if we have high quality atmospheric model inputs of temperature and precipitation," Pomeroy said.

Exchanges have been underway for three years between Canada, China, Chile, Spain, Nepal, Switzerland, USA and Germany. Overall, more than 25 government institutions, universities and non-governmental agencies from 15 countries are INARCH members. In Canada, the Yukon Government and the Water Survey of Canada are also committed. While there are no contributors from B.C. yet, Pomeroy said he expects some from the Cariboo Mountains very soon. And the network is aiming to expand to Austria, Sweden, France, New Zealand and Norway, and to a wider range of locations and scientists in alpine regions around the world.

"We have even had discussions about Mount Kilimanjaro in Africa and the challenges that the loss of its glacier cap means for the hydrology of the Great Rift Valley," Pomeroy said. "We don't care where they are based, but the criteria is those conducting serious scientific research on alpine snow and ice hydrology from instrumented catchments (research basins) who are willing to share their data, science and techniques and wanting to work collaboratively on new global mountain water science."

The next step for INARCH is to assess where scientists are focusing studies on mountain hydrology, define what studies are being conducted, determine the best practices for mountain snow and ice hydrology research and then decide where and how the network can assist in their development. "Through all of this we will keep in mind activities that foster the general improvement of mountain hydrology research and development throughout the world, and provide material for education and training programs that would build science capacity in mountain regions and help residents and governments deal with the impacts of climate change," Pomeroy said.

Looking ahead, efforts are underway for Canada to host a workshop in the fall.

The project traces its roots to 2010, when the U of S Centre for Hydrology hosted the Canadian Rockies Snow and Ice Initiative Speakers' Series in Canmore. Presenting scientists from the U.S., Switzerland, Spain and Germany, realizing they all shared common challenges, decided they needed to work more closely together. Challenges shared by snow and ice hydrologists working in similar environments include field conditions, measurement needs, computer simulation characteristics and a changing mountain climate, as well as the nearly universal scarcity of data being recorded in mountainous areas. Working in different countries, and on different continents, researchers have not previously had opportunities to exchange theories, measurement techniques and results to assess the global importance of mountain snow and glacier hydrology research.

The timing, Pomeroy said, is critical, as the earth's climate changes.

"The need is urgent," Pomeroy said. "Glacier coverage in the Canadian Rockies has declined by over one quarter, the snow season is shorter in spring and winter temperatures have risen several degrees since the 1960s. At the same time, we are experiencing reduced streamflow in late summer and have just gone through catastrophic flooding that was driven by rainfall and increased by snowmelt. Massive disasters have occurred in the Himalayas, the Alps, the Pyrenees and the Andes in the last few years. There is strong indication that these are manifestations of global change in the mountains and we need to understand them better so that we can anticipate and prepare for future changes."

The role of INARCH is to aid in answering what the WCRP has defined as the "grand challenges," which relate to improving understanding of the role that snow and ice play in a changing climate in freshwater, sea level change, permafrost thaw and to changes in water availability.

"A key question for GEWEX is 'how can we better understand and predict precipitation variability and changes, and how do changes in land surface and hydrology influence past and future changes in water availability and security?'" Pomeroy said. "INARCH will answer parts of that question for mountain regions."

More than half the global population depends on water supplies that originate in mountain watershed basins, and where those supplies are influenced by snow and glaciers they are vulnerable to climate warming that is unavoidably evident in glacial retreat and low-snow winters such as western Canada is experiencing this season, Pomeroy said.

"We have to find out the limits to the resiliency of our mountain waters so that we can mitigate the worst impacts of climate change, which will be on global water security," he said. "Also, as many of the high mountain snow and ice environments are in UNESCO World Heritage Sites, national parks or simply incredible and irreplaceable landscapes, there is a global interest in what we are doing. And that has now been recognized by the WCRP and by UNESCO."

The benefits for Canada to be a contributor to and participant of this network is significant, he added.

"This gives Canada access to expertise from around the world to help address our mountain water, snow, glacier and climate change problems," Pomeroy said.

"And it gives Canada a chance to show some global leadership and to guide the approach to solving some of the thornier mountain water problems that affect us, not only directly, but vast fragile ecosystems, threatened human populations and also the operation of our multinational corporations."

Having INARCH trace its roots to the Canadian Rockies, and to the Bow Valley where Pomeroy and his team of researchers collects data at several instrumented sites in Kananaskis Country — very near to ground zero for Southern Alberta's 2013 devastating flood — is a win-win, he added.

"The Canadian Rockies Hydrological Observatory and Cold Regions Hydrological Model that have been developed here in the Bow Valley can now be examples of scientific approaches and computer modelling techniques that can be exported to similar mountain regions in Asia, South America, Europe and the U.S.," he said.

"This gives our problems and solutions greater global significance and recognition. We've worked out many of the bugs in these approaches and models here, but by trying them out elsewhere we can improve them further and then anticipate future snow, glacier, water and climate issues that may develop or become more prominent here in the future."