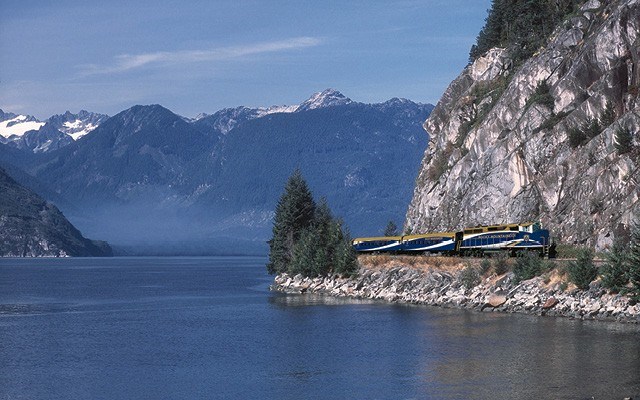 bon voyage The Rocky Mountaineer will no longer be making day trips to Whistler starting next year. Photo submitted

Since the first expedition of the Rocky Mountaineer's (RM) Sea to Sky Climb — a day trip by rail from Vancouver to Whistler — people have made a recurring point of coming out to greet the train.

"The community along the corridor has really embraced our little train to Whistler," said Doug Rogers, senior manager of onboard operations with the RM. "We have people that have been out waving at our train since the very first departure in 2006."

In the more than 400,000 trips the train has taken, people have grown quite attached to seeing it pass by.

"Over the years it's graduated from just simple waving to, on special days, holding up signs," Rogers said.

"'Happy Canada Day,' or 'Happy Mother's Day,' or what have you, so we would reciprocate by holding up signs right back at them."

It's a unique relationship, forged between strangers on the basis of predictability — I may not know your name, but I know I can depend on seeing your friendly wave at the same time each day.

Starting this spring, those friendly waves will be slightly less frequent.

In April 2016, the Sea to Sky Climb will be rolled into the Rainforest to Gold Rush route, which includes overnight stops in Whistler and Quesnel, before carrying on to Jasper.

The Mountaineer will now be in Whistler two days a week — Sundays and Wednesdays.

"It definitely had some amazing moments. It was very popular," said Shannon Kidd, the RM's senior manager of communications, of the Whistler day trip.

Kidd said the changes are due to the RM's RedLeaf Service fleet being retired.

"Really it's the evolution of the Rainforest to Gold Rush route," she said.

"We do a lot of insights and research with our past guests who travel with us, and one of the pieces of feedback that we've received for years now is that people want more days on the train, so this will be our second three-day rail route from Vancouver to Jasper."

With the RedLeaf fleet retired, the RM's GoldLeaf and SilverLeaf cars will service the route.

"The GoldLeaf domed are our high-end equipment, so they're a double-decker car with seats in the top and then a dining room in the bottom," Kidd said.

"It's amazing for the Whistler leg of things, because a lot of the scenery on the way is canyons and water and it's just beautiful looking down it."

With the route changes, the RM's season will be extended by an additional five weeks, while capacity on the Rainforest to Gold Rush route will be increased by 40 per cent.

And while they may not see the train pass by as often as they used to, some of the Mountaineer's regular wavers got to take part in a very special send off for the train.

"We sought out and invited all of those people that were regular wavers, and invited them onboard and gave them a trip as a thank you for their support," Rogers said.

"Every single person that was invited attended, which was really nice."

The wavers were whisked up to the Fairmont Chateau in Whistler where they were treated to a special reception celebrating the RM's 25th anniversary and the retirement of the Whistler day trip.

"It's an interesting social phenomenon, because many of these people thought that they were the only ones waving at the train," Rogers said.

"We were able to bring some neighbours together."

For more on the RM and its routes, visit www.rockymountaineer.com.