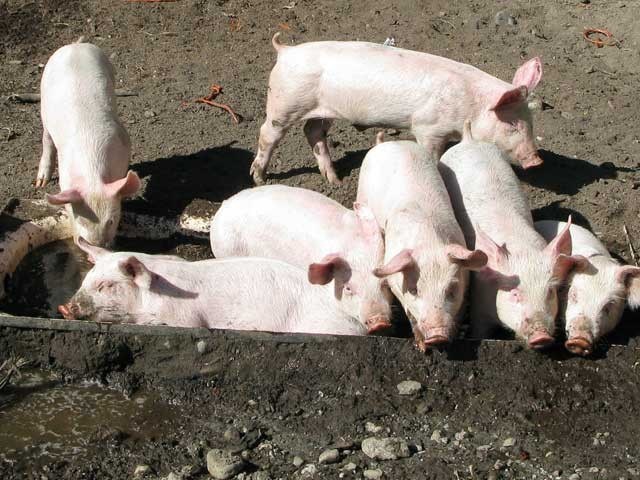 That'll Do Pig Free range pork can be hard to come by, though an Upper Squamish pig farmer has a few snorts on offer

In the romance between mouth and meat, it’s the supermarket that is often the home-wrecker. It represents the last degree of separation in a largely monolithic industry bent on mass production and characterized by distance between source and consumer. Whither the days of yore, when people and their food were divided only by a short walk or a careful hunt? Is there any going back?

Scott McQuade is trying, though he has something of an advantage. He and his wife are friends with Lauren Fraser, a free range egg and pork farmer working in Upper Squamish Valley. The McQuades have a baby on the way, and with the new responsibility came a new awareness of health.

“Basically, we just went on the Internet and started learning about the hormones that are in meat in Canada,” he says. “So we just wanted to find something more natural that tastes better, too.”

And for them, there is no going back. It costs a little more than supermarket meat — about $5 a pound of pork from Fraser — but the McQuades consider that a small price to pay for the added comfort and peace of mind.

Now consider Peter Fritz. He has a background in agriculture, specifically the egg industry, and he’s long been cognizant to the entire production chain involving meat. Also a friend of Fraser’s, he made the switch to free range products about seven years ago.

“I think I just kind of wanted to support responsible agriculture — and health, as well,” he said. “I’ve got an agricultural background, so I know what’s going on out there.”

Typically, these sorts of ethical meat-eaters have an easier time finding chicken, eggs, milk and similar staples. Squamish, whether in Garibaldi Village, the Upper Valley or the downtown farmer’s market, offers a few such opportunities. Pork, on the other hand, can be a little harder to come by, though it does appear at the farmer’s market in Pemberton.

Fraser got into the free range pork business about a year ago. Along with her husband, she fenced up some old property in the valley, slowly creating the pen for animals they bought in Chilliwack. Her first batch of wiener pigs was small, just six animals ultimately sent to Britco Slaughter in Langley.

“The first time we took them to slaughter, it was hard, and we both cried,” she remembers. “We have friends who eat meat and say, ‘How can you do that? How can you look at that pig when you know you’re going to eat it?’”

It’s the food intimacy thing again. To Fraser, raising your dinner, even developing an affection for it, promotes respect. While the tears clearly speak to that, the Frasers are careful not to go too far. They don’t, for example, name their pigs, even though most people suggest pigs are smart enough to learn their handles.

In any case, things were a little easier the second time, when they sent 10 pigs to Langley, a slightly larger haul. Next year, they hope to go larger still.

The free range business in Canada has long been growing, so much so that, in 2000, the Canadian Food Inspection Agency (CFIA) began tightening definitions in an effort to ensure free range products were actually free of hormones. Before her experience with free range meat, Fraser was a vegetarian.

But not all herbivores can be won over, and more than a few of them point suspicious fingers at the CFIA as a reason. There’s the listeriosis outbreak, for example, or, more specifically, the fact that some farmers are unable to guarantee that their feed is free of hormones and pesticides.

But Fraser is confident about her practices. Her farm is about as idyllic an image as the imagination can muster. Strafed by steep cliffs with acreage rambling in and out of bushes, the whole set up is pretty soothing. She and her husband are clearing more land in anticipation of another bunch of pigs.

However, they don’t have any kind of certification, a fact Fraser quickly explains. According to her research, certifying bodies don’t always go far enough.

According to the Canadian Coalition for Farm Animals (CCFA), there are almost 1.5 million sows reared in Canada, many of them in crates of about two feet in width and seven feet in length. This, says the CCFA, creates a host of problems, from animosity between animals to painful pregnancies. To pre-empt violent conflict between pigs, producers will remove their teeth and tails at birth.

While Fraser could have applied for certification from the Society for the Prevention of Cruelty Against Animals (SPCA), she said their standards, which date back to 2001, don’t ban crating. Further, space for pigs was recommended at eight to 10 square feet per animal weighing up to 154 pounds.

“I remember that my husband and I scoffed at the requirements for the certification,” she says, “given that we were considering giving a couple of acres to 10 to 15 pigs.”

Fraser happily shows off the large expanse she and her husband are carving out of their 25-acre farm. At the same time, she doesn’t want the business to get too big. In an industry borne on robust ethics, size matters.

“We are never going to be a big scale business,” she says. “It’ll always be small scale for us.”

The trick is that free range ethics sometimes overlap with another set of beliefs that call for smaller industrial footprints, 100 mile diets and relationships between consumers and producers. And here’s another bend in the road Fraser is quick to manoeuvre: Had she stayed a vegetarian, and had she been an activist about it, how readily available would vegetables be without manure from farm animals to fertilize their growth?

She chuckles a little at that one. As with many romances, the one between people and their food can be complicated.