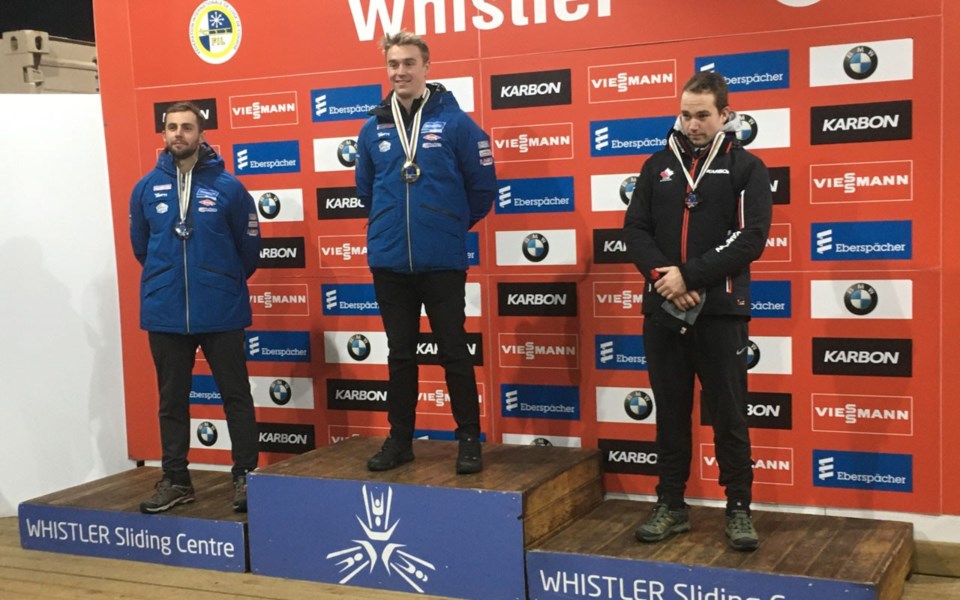 The Russian posted a second-run time of 49.839 seconds to jump from second to first and win the third stop of the season. German Felix Loch was 0.147 seconds back and Italy's Dominik Fischnaller was 0.171 seconds off the pace.

"My plan was to beat the track record," Repilov said. "My start was good in the second run. My lines were good."

Though it was his sophomore time racing the track, Repilov said he enjoys sliding here in Canada.

"I like Whistler. It's my second time [competing here]. It's the best track for the conditions I've seen this season and it's good for me," he said.

The top Canadian was Whistler's Reid Watts, who ended the day in 21st overall, 0.794 seconds back of Repilov.

Watts had endured some struggles already this season, finishing lower than he had hoped for. After finishing ninth in the Nation's Cup race on Thursday, he sought to make some changes heading into the big race, which didn't work. Watts had identified his starts as a problem early in the season, working hard on them leading into the Whistler stop, but ultimately, was not happy with his progress.

"I realized my sled wasn't running fast enough, so today, I decided to take a big risk," he said. "Obviously, it really didn't pay off. The starts need a lot of work, but I felt that the sliding today, in my second run especially, the times really didn't add up, so I'm a little confused. I'm very disappointed and I'll get back to the drawing board this Christmas, figure out some stuff, and come back stronger than ever in the second half."

Despite the struggles, Watts didn't go home empty-handed as he finished third in the America-Pacific Championships, held concurrently with the World Cup.

The only other Canadian, Colton Clarke, took 25th overall.

Russia also topped the podium in the women's race, with Tatyana Ivanova holding off Germany's Anna Berreiter by 0.191 seconds and fellow Russian Viktoriia Demchenko by 0.221 seconds.

In just her third-ever World Cup race, Berreiter was thrilled to have tamed the Whistler track, though she credited recent precipitation and some warm temperatures with helping to slow conditions and allow her to learn the world's fastest track quickly. She also won the Nation's Cup race to qualify for the World Cup.

"It's an incredible feeling standing on the podium. I love that feeling," she said. "I was feeling good at this track. The training was very good and yesterday, the Nation's Cup went very good.

"It's very fast and it's not so hard, so you can get it very fast. It's a lot of fun sliding here."

Saturday's action begins with the doubles race at 12:50 p.m.