Team West Coast Wild Ones gears up for nautical race from Port Townsend to Ketchikan starting June 8
Jun 6, 2017 4:00 AM By: Vince Shuley 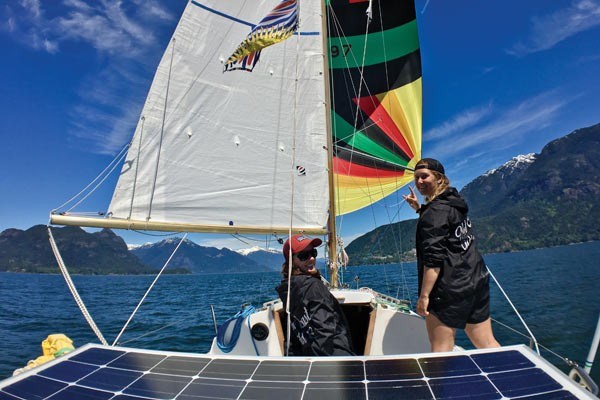 Powered by Nature Sea to Sky sailors are taking part in the Race to Alaska, a strictly wind- and human-powered sailing race that runs from Port Townsend, Wash. to Ketchikan, Alaska. Photo by Ben Biswell

Whistler sailor Ben Biswell can recall the exact moment he decided to throw his skipper cap in the ring for the Race to Alaska (R2AK), a strictly wind- and human-powered sailing race that runs from Port Townsend, Wash. to Ketchikan, Alaska.

"I was sailing around Vancouver Island last summer (with crew member Keanna Coral when) the Race to Alaska (was on) and we were following the progress of the participating boats," explained Biswell.

"That's when we came up with the idea to sign up for the event in 2017. We realized that my boat would be the perfect vessel for the race, so we started looking at the preparations more seriously."

Biswell believes his 27-foot (eight-metre) single mast sloop O'Day has the ideal mix of lightweight manoeuvrability and open water stability for the R2AK, especially after his homemade custom modifications.

"It's not the sort of boat you'd sail to Mexico or Hawaii in, but with a good weather forecast, it can get out for open ocean sailing," he said.

"It's more of a coastal cruiser, it can go closer to smaller islands and inlets into water (1.5 metres) deep in a pinch."

To make the O'Day ready for rowing in and out of Victoria Harbour and along the tight channels near Ketchikan, Biswell attached a custom platform to the stern of the boat with sliding seats, oars and mounts from a rowing skull, procured with help from the Vancouver and UBC rowing clubs. The platform is attached with a 90-degree pivot joint so it can be stowed vertically when cruising with full sails.

There are two rules that make R2AK distinct from so many other races and regattas around the world. One is that skippers have the freedom to plot their own route, only having to pass through two waypoints; Seymour Narrows in the Johnstone Strait and Bella Bella on B.C.'s Central Coast. The second rule is that no engines are allowed, meaning crews have to pilot their vessels strictly under wind and human power for the entire journey, with no outside support.

With no other restrictions on vessel types or size, the R2AK start list for 2017 has everything from 34-foot (10 metre) Crowther Buccaneer Trimarans to sea kayaks, rowing skulls and even stand up paddleboards. The regulation against engines means that crews on larger and more prestigious sailing boats are not able or willing to risk navigating the tight B.C. Coast waterways under self propulsion. The humble prize pool of US$10,000 is also aimed at making the race more about the journey than the reward for finishing first. The runner-up prize is a set of steak knives.

"It's still competitive, there are some quite expensive boats doing it," said Biswell. "But overall, it's not about winning. It's about the adventure and the challenge, making it work with the gear you have and simply making it up to Ketchikan."

Joining Biswell on the journey as "Team West Coast Wild Ones" are Whistler and Squamish locals Keanna Corral, Chantelleie Boudreau and Becky McCleery. He expects the journey to take roughly seven days of sailing around the clock, the crew of four working in two-person shifts while the others rest in the cabin. That will require sailing at night, something that Biswell is mindful of.

"If the weather forecast looks bad, we'll have to retreat from the open ocean to sneak in to the inner passages," he said. "Then when night falls, you're sailing up narrow passages with land all around you with not very many lights on shore for navigation. You'd better hope your electronic navigation doesn't fail."

With risks ranging from turbulent coastal waters to potentially being cast ashore into Alaska's coastal Grizzly Bear habitat, the R2AK isn't shy about the challenges that await its participants. In 2016, of the 44 vessels that cast off in Port Townsend, only 26 made it to Ketchikan. Race organizers test the mettle of sailors — and their respective vessels — with an initial leg of 65 kilometres across the notoriously rough Strait of Juan de Fuca to Victoria, labelled the "Proving Ground." Sailors that successfully complete the first leg can then tackle the remaining 1,200 kilometres to Ketchikan.

With years of sailing experience along B.C.'s coast, Biswell has plenty of marks on his sea charts that highlight where he expects the voyage to get more demanding. For example, the strong summer north-westerly winds can clash with the direction of the tide in the Johnstone Strait, making for rough seas. The open water between the northern tip of Haida Gwaii and the U.S. Border (known as the Dixon Entrance) will also require suitable weather to cross safely.

"I do feel pretty confident, but not foolishly so, I hope," said Biswell. "Our boat is built to sail to somewhere like Ketchikan and while we won't win against the lighter and faster ones, we won't suffer as much in bad weather."

After hopeful completion of R2AK, Biswell is looking forward as much to his return down the coast. Friends are driving his boat engine up to meet him in Ketchikan, along with other luxuries such as his crab trap, fishing gear and barbecue. At that point, he'll spend three to four weeks cruising back down the Alaska and B.C. coast at his own pace with a fresh crew, sleeping at night and taking as much time as he likes to enjoy the scenery.

To follow the progress of Team West Coast Wild Ones, head to the Facebook page facebook.com/westcoastwildones. The starting gun sounds in the pre-dawn hours of Thursday, June 8.