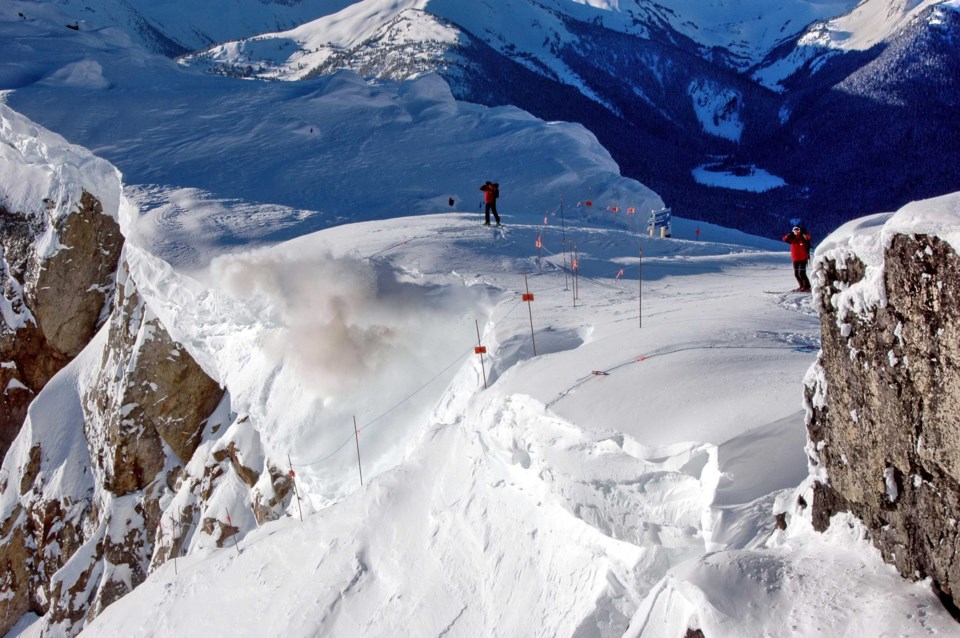 Dave Heighway has been skiing in Whistler for almost 17 years but he's never spent the night outside in minus 12 degrees, injured, willing down the hours til rescue — until the night of Saturday, Feb. 25.

All it took was a simple misread of the terrain, terrain he's skied before and knows well, and before he knew it, he and his buddy Cory Leis were veering away from Flute Creek back to Singing Pass and were heading down a steep drainage in the other direction.

They knew they were off course. But by then it was too late. They were past the point of no return. And the avalanche danger was considerable.

Heighway was below Leis; the snow, he said, was starting to slab on him. The next thing he knew he was being taken out in the wash of an avalanche, losing his skis, his poles, banging up his hip, damaging his knee — "through the ringer" was how he described it.

Leis, who has first aid, rushed to his friend who fortunately was not buried.

Heighway was alive. But unable to bear weight on one leg. It was 2 p.m. Leis knew he had a long, solitary journey ahead of him for help in what has been described as "some of the most heinous gullies that are around." He made his friend comfortable, left him a puffy coat to brave the night, and struck out.

"Things don't have to go very wrong before you're spending the night out there," admitted Heighway, a few days after his ordeal and still unable to walk.

Leis said simply: "It's so hard to leave your friend."

Far from the extraordinary, Heighway's story is becoming the familiar for Whistler Search and Rescue (SAR).

It's the nature of the calls that has Sills sitting up and taking notice.

"The trend towards serious outcomes is growing," he said this week.

That's one of the reasons why Whistler Blackcomb issued a press release this week to urge caution in what it calls "silly season."

The two main messages are: never ride/ski alone and ski/ride where you know.

"Adventure and exploration are key elements to what makes skiing and snowboarding so enjoyable but it is important to be educated on the terrain and the potential hazards when entering a new area."

Sills could not agree more.

The number of out-of-bounds skiers and ski mountaineers rose in call volumes substantially from last year, he said. And the biggest trauma was from the snowmobiling sector.

Where once the injured or lost parties were typically young males in the 18-29 year age group, now they're older. More females were part of rescues this year.

Sills calls it: "the changing face of recreation with an increased appetite for more exposure to risks and the tools to do them and the access to do them."

The manager, who has been with SAR for 35 years, said there has been a noticeable shift in patterns of behaviour during his time volunteering with the organization.

"Twenty years ago if you were going to huck yourself off a cornice you were probably going to do it in the ski area and if you had a negative consequence from that decision, you had medical aid right there," said Sills.

"Now we're seeing that same behaviour taken 20, 30, 40 kilometres away from the closest road."

His point: more and more people are engaging in what he calls "super hazardous recreational behaviour with no consequences as to what the outcome is going to be if something goes wrong."

He said a lot of that behaviour is driven by film — either commercial or amateur filmmakers for YouTube.

"We see kickers being built way back on the Ice Cap and they're gi-normous," said Sills.

And then, there is always just the pure lure of the backcountry. As in-bound areas on the mountains get tracked out faster than ever before, skiers and riders look for that thrill of fresh powder elsewhere.

Heighway said he doesn't ski risky stuff. He was equipped and prepared to ski the terrain he thought he was heading into. They simply took a wrong turn.

And with the benefit of hindsight, though there were savvy enough to have avalanche gear with them — avalanche trasceiver, probes, shovels — Heighway said he wished he had his Leatherman, a flashlight, a space blanket. That would have made the long night a bit more bearable.

Heighway was long-lined off the mountain and taken to the clinic at first light the next day.

He wasn't alone, however, that night. Across the valley, beyond Blackcomb two Swedish snowshoers were on the third day of a trip in the Spearhead when they too triggered an avalanche while travelling in white out conditions.

They too called for help, worried about going any further given the twitchy snow conditions. They were told to bed down. It was too late for rescue.

In the morning they shelled out more than $2,000 for a helicopter ride back to safety.

Whistler Blackcomb is also urging skiers to return from the backcountry outside of the ski area boundary because of the hazards of winch cats. If you see a groomer, it's important to make yourself as visible as possible. Runs being winched are marked by strobe lights and stop signs. Stop and wait for a groomer to give you clearance.