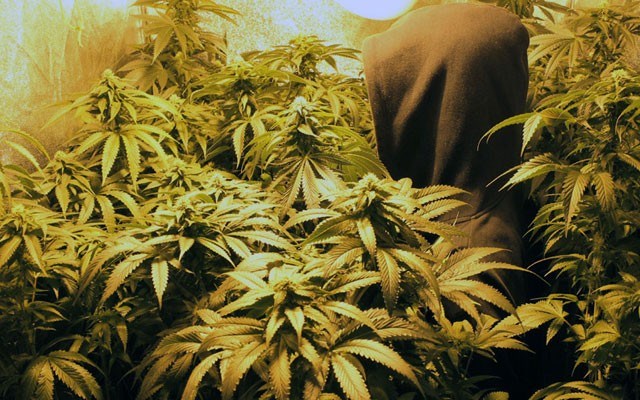 Critical of Feds A local medical marijuana grower speaks out against changes. Photo by Brandon Barrett

A Sea to Sky medical marijuana home grower is speaking out against new federal regulations he believes will put his health at risk.

And he is slamming the government's characterizations, which suggest that home-growers cultivate in an unsafe manner, which puts neighbours at risk or creates a draw for criminals who want to steal the marijuana to sell on the streets.

"It's the government's falsities of mould, danger and organized crime that are pushing this (program) to be removed," said the Sea to Sky resident, who Pique has agreed not to name.

He believes that Ottawa is seeking to monopolize on a legal marijuana supply industry that's been predicted by Health Canada to produce $1.3 billion in annual revenue by 2024. Ottawa reported nearly $1.7 million in revenue from the sale of dried marijuana and seeds during the fiscal year of 2011-12.

"With anything, you're going to get abuse," he said, explaining that he has a potentially debilitating neurological condition and is permitted to possess up to 1,350 grams of dried cannabis at a time and 30 marijuana plants in his home. His prescription is for six grams a day, which he typically consumes in concentrated form, or tinctures.

"You go into a couple licensed breweries around the country and they're going to be below health standards, that's just the way it is. Just because it's marijuana, you can't just lump us all in because there are a few bad apples."

Many Canadian medical marijuana users have been critical of the changes announced in the switchover to Ottawa's new Marihuana for Medical Purposes Regulations (MMPR). Many patients would prefer to continue sourcing specific strains of cannabis from small-scale growers, or produce their own.

Lawsuits challenging the full implementation of Ottawa's MMPR have been filed in B.C. and Ontario courts, claiming patients are being prevented from accessing affordable medicine. B.C. lawyer John Conroy has compiled impact statements from medicinal cannabis users, including this grower, in order to challenge the new regulatory framework on constitutional grounds.

The home grower said he has worked diligently to cross breed the right strain for his specific condition.

"(Growers) are able to create genetics specifically for them that help their conditions that they may not be able to find again, or will have to go through that whole process of finding those genetics again through a licensed producer, but this time it's going to cost you $12 (a gram)," he said. "I don't have the money to go through that trial and error process to figure that out, which is going to directly influence my quality of life."

Federal officials have projected the average price of a gram under the new MMPR program will be $7.60, although producers will have the ability to set their own prices. This is still well above the $1 to $4 cost many home growers have been able to achieve cultivating their own product, or Health Canada's current $5 per gram price for cannabis produced under contract.

The price hike means patients potentially will spend hundreds of additional dollars a month once the new program comes into effect, which will force them to purchase less cannabis as a result.

The added costs will also increase the temptation for licensed users and growers to sell their overflow of medicinal pot on the black market, he said.

"We are all patients, we don't all necessarily have a lot of money. Being able to supplement (your income), or buy your groceries or pay your hydro bill is really appetizing to some people because it's that easy, it's cannabis," he said. "These are just normal, good people who work other jobs and have families and will want to supplement (their income) a tiny bit."

Critics of the MMPR program have also pointed to a reduction in overall quality of the medicinal marijuana that will be produced. Commercial operators will have to meet rigorous quality standards, but will have the option to irradiate the cannabis they produce in order to eradicate potential mould spores and bacteria.

Starting April 1, the roughly 38,000 Canadians currently licensed to possess medicinal marijuana will no longer be permitted to produce their own cannabis, or source it from approved small-scale home growers. Instead, the production of medical marijuana will turn over to large, for-profit commercial operations authorized by Health Canada to cultivate and sell pot. Patients will receive only dried cannabis sent directly by mail or courier in childproof packaging.

In a 2012 assessment, Health Canada said that medical marijuana should be produced and distributed as much as possible in the same manner as medication, and also highlighted the current Marihuana Medical Access Regulations (MMAR) program's "potential for diversion of marijuana to the illicit market due to limited security requirements, the risk of violent home invasion by criminals attempting to steal marijuana, fire hazards due to faulty or overloaded electricity installation to accommodate high-intensity lighting for its cultivation, and humidity and poor air quality."

The federal government is not permitted to share the location of licensed grow-ops with municipal or law enforcement officials. Health Canada has said it will provide written guidance to current program users to facilitate the proper disposal of dried cannabis and marijuana plants and encourage compliance with federal, provincial and municipal laws.

"Health Canada won't have any authority to ensure the remediation (of these grow-op homes) takes place, so that's a concern, but even under the Privacy Act, Health Canada can't tell us where they are, so we won't know whether they have been remediated," Wilhelm-Morden told Pique last month. The paper revealed there were 18 in Whistler.

Less than 500 medicinal users were licensed when the MMAR program was launched in 2002. Health Canada predicts there will be nearly 309,000 Canadians permitted to possess medicinal marijuana in 2024.