Squamish Flying Club flew over Whistler and Squamish in honour of Snowbirds’ Operation Inspiration, which ended with a deadly crash Sunday
May 18, 2020 7:45 AM By: Jennifer Thuncher/The Squamish Chief 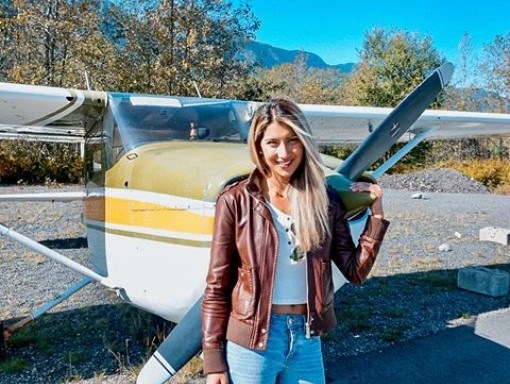 Tonight at 7 p.m., as your headed outside to make noise for those on the front lines of the battle against COVID-19, you might have noticed some small planes overhead.

Pilots with the Squamish Flying Club were soaring over Squamish and Whistler as part of Operation Backup Inspiration, in honour of the Canadian Forces' Snowbirds Operation Inspiration, which ended tragically Sunday.

Capt. Jenn Casey died Sunday in Kamloops when the jet she was in suddenly crashed into a residential home.

"We have such a group of aviators here, so we thought, 'Let's do our own Sea to Sky edition,'" said pilot Alexis Thind, adding that at least six local pilots committed to the flyover on Monday, May 18.

"I am a young, local aviator and I was always inspired by the Snowbirds," said Thind, who used to routinely go to the Abbotsford Airshow with her dad, who was in the Royal Canadian Air Force.

"That had a huge role in why I became a pilot and I think maybe this will inspire some young future pilots in the area, I hope."

Thind said that given Casey was a public affairs officer, and her job was to talk to youth and fans, everyone who has gone to see the Snowbirds recently, had an interaction with her.

"To see something like that happen to the ambassador is just definitely heartbreaking," she said.

The pilot of the CT-114 Tutor aircraft, Capt. Richard MacDougall, survived the crash and is being treated in hospital for his injuries.

The Snowbirds, which have been grounded during the investigation into the crash, were on the last leg of their cross-Canada tour to raise spirits during COVID-19, and salute front-line workers when the deadly crash occurred.

The B.C. General Aviation Association organized about 35 planes to fly over the Lower Mainland as part of the operation, with the Sea to Sky hosting its own version.

The planes departed from Squamish Airport just before 7 p.m. and then flew over downtown Squamish and up over Whistler Village. It was timed to coincide with the nightly 7 p.m. cheer in support of front-line essential workers in the COVID-19 crisis.

-With files from The Canadian Press