UPDATE (Tuesday, Oct. 27): As the search for Peter Oleski and River Leo continues for the fifth day, Pemberton Mayor Mike Richman has released a statement regarding the missing men.

In a post to the Village of Pemberton's Facebook page, Richman wrote that he has "been struggling this week to put together words to speak to the ongoing search for River and Peter.

"My heart is heavy with worry and concern for them, their families and the Lil’wat community," he added.

Richman expressed his gratitude for local Search and Rescue teams, police, and volunteers.

"I am also aware of the vast amount of support and work that the volunteer's families do in holding down the home front while these incredibly skilled people search for River and Peter. Once again the generosity of the businesses and people in our community is exceptional and appreciated," the post read.

"Our collective and connected effort gives me the hope that Peter and River will feel and hear our call for them to come home. Lil’wat, please know you are in my thoughts and I send you strength and love."

Richman directed those looking to aid in the search efforts to a local Facebook page where current calls for assistance will be shared.

In a news release issued Oct. 25, Pemberton RCMP said they were initially requested to assist Stl'atl'imx Tribal Police in the search for the two men early Friday morning, Oct. 23, joining the "already extensive" efforts to find the father and son who had been reported missing after going mushroom picking in the Upper Mckenzie Basin area the previous afternoon.

RCMP members have since been assisting the Lil'wat Nation in coordinating resources, including Pemberton Search and Rescue (SAR). According to the release, Saturday by Lions Bay SAR, Squamish SAR, and Whistler SAR all joined the search effort on Saturday, while Comox 442 Squadron Cormorant also attended to the area alongside several other air support services.

"We are asking anyone in the area today to keep an eye out for any signs of Peter and River in the McKenzie Basin, Upper Mckenzie Trail, and Mckenzie Basin FSR," stated RCMP Sgt. Sascha Banks in the release.

"Lil'wat Nation search teams will be joined today by a large number of SAR teams from across the lower mainland and we will be supporting in any capacity required."

Peter Oleski is described as a 48-year-old Indigenous male, standing at 6 feet 2 inches (188 centimetres) with a medium build. He has brown hair and hazel eyes, and was last known to be wearing black pants and a dark grey sweater.

Oleski's son, 21-year-old son River Leo, is an Indigenous male who also measures at 6 feet 2 inches, or 183 cm, with a slim build. Police say he has brown hair and brown eyes.

Father and son Peter Oleski and River Leo left for mushrooming in the Upper Mackenzie Basin on Oct. 22, according to a Lil’wat Nation press release issued Saturday, and were last seen at 2 p.m. Thursday.

When the men didn’t return home that night, RCMP and Pemberton SAR were notified, and soon a search turned up the vehicle they had been travelling in, a red, 1997 Dodge 1500 pick-up, near the upper paragliding launch on the Mackenzie Forest Service Road.

“Myself, Kúkpi7 Gélpcal (Cultural Chief Ashley Joseph), council and appointed leadership are grateful for the time that has been invested in searching for River and Peter,” said Kúkwpi7 Skalúlmecw (Lil’wat Nation Chief Dean Nelson) in the release. “Your concern, compassion and participation in the search effort are very much appreciated.”

There are about 60 community members currently helping with the search, but Nelson noted in the release that base camp at the entrance to Mackenzie Forest Service Road is full.

“I ask that everyone stay home now and let SARS and the Stl’atl’imx Tribal Police continue the search. We will update the community as more information becomes available,” he said.

“It is my deepest hope that River and Peter are safe and that we find them very soon. I ask that you keep them in your thoughts and prayers.”

This is a developing story. Check back with Pique for updates. 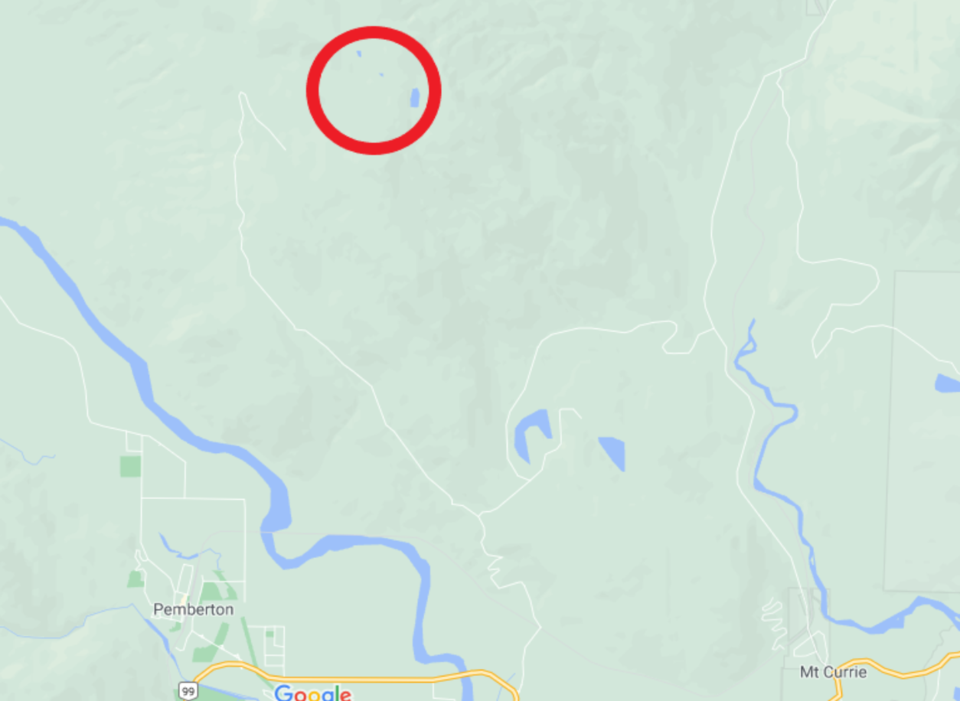 The approximate location where search parties have been looking for a father and son from the Lil'wat Nation who were reported missing when they did not return home from a mushroom foraging excursion in the Mackenzie Basin area on Thursday, Oct. 22. Image courtesy of RCMP

- With files from Megan Lalonde