Second Spearhead hut gets funding thanks to $1.5M donation 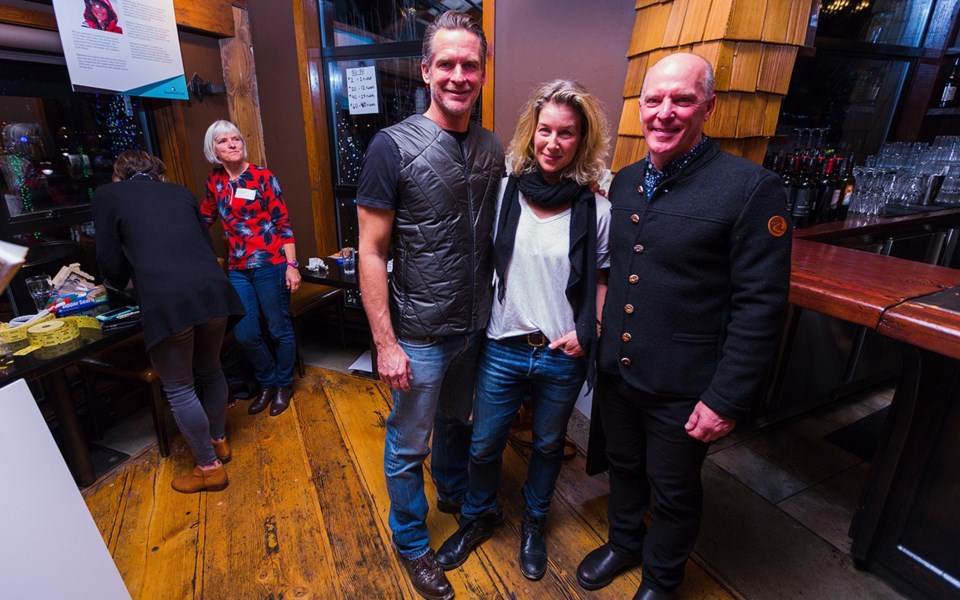 A Vancouver couple with Whistler ties made a big announcement on Sunday, Nov. 26.

They're donating $1.5 million to the Spearhead Huts Society (SHS).

"This is our special place," said Brian Hill, founder and CEO of Aritzia.

"We're honoured and humbled to be in a position to contribute and make this second hut come to fruition."

Hill made the announcement at a fundraising event for the SHS at the BrewHouse, which featured a silent auction and drew an impressive crowd.

"If you ever see us out there, I'll be the one following behind my buddies," said Hill, garnering a laugh from the audience, many of whom are longstanding supporters of the project.

"You can give a little push in the back.

"We'll hopefully see you all out there and get to know you a lot better in the coming years."

During the announcement, Hill praised the SHS and the numerous volunteers who have helped bring the ambitious project to fruition.

"If it wasn't for all of you, I wouldn't be standing here," he said.

Once complete, the project will feature three state-of-the-art huts.

They will sit along the Spearhead Traverse, an iconic 40-kilometre touring route that runs through Garibaldi Provincial Park, connecting Whistler and Blackcomb mountains.

Each cabin will have room for around 40 people. According to the SHS, the hut-to-hut system will accommodate up to 7,000 visitors a year.

The Hills' donation will cover the cost of the second hut, which will be built on Mount Macbeth.

In an interview with Pique, Hill's wife, Andrea, said she was thrilled to support the West Coast's first hut-to-hut project.

"Access to the backcountry is a special thing. These huts give opportunity to get out there and experience it in the winter and summer," said Andrea.

Asked about her connection to Whistler, she said: "It's my favourite place in the world.

"We're planning on spending more time here... It felt like a great place to give back."

For Jayson Faulkner, chairman of the SHS, the donation is monumental.

"Knowing we have money means everything," he said.

Along with a core team, Faulkner has been working on the project for the past seven years.

"We always believed if we got the first hut built that that momentum would carry. We knew there were people in the community of Whistler who have come here for a long time and who are backcountry enthusiasts."

"We knew that that community was significant and there were resources."

During his remarks, Faulkner highlighted the contributions of backcountry legends, such as Karl Ricker, Werner Himmelsbach and Don MacLaurin.

"It wasn't our vision of this," he said, noting that the hut system was dreamt up around 50 years ago.

Construction began on the first of the huts, at Russet Lake, this summer.

Originally scheduled to open this winter, construction was delayed.

"With the heavy snowpack it was impossible to have the building window that we needed," explained Faulkner, who said the aim is to have it open by Christmas 2018.

The first hut will be called the Kees and Claire Hut, in honour of Cornelius "Kees" Brenninkmeyer and Claire Dixon.

The well-liked couple passed away in a tragic accident in 2007. They were traversing the Wapta Icefields in the Canadian Rockies when their snow cave collapsed.

The Brenninkmeyer family has been a major donor to the project, giving $900,000 towards the first hut.

The Dixon family generously offered to match funds, up to $10,000, raised during Sunday's fundraiser.

"(The huts) will allow more people to experience this area with a higher degree of safety," said Paul Dixon, Claire's brother , holding back tears as he tried to put into words what the huts mean for his sister's legacy.

Freeskiing legend Mike Douglas hosted the fundraiser. A big proponent of the plan, he said the hut-to-hut system will bring Whistler in line with other European destinations.

"Once you try it, it will blow your mind," he said, adding that in this day and age, backcountry experiences are more valuable than ever, allowing families to disconnect and be present.

"We're always plugged in and connected, (so that backcountry) experience is so much more important than it's ever been," he said.

Sunday's event raised almost $60,000. During the event, the SHS also announced an additional $73,000 worth of recent contributions from the Brett Carlson Memorial Foundation and friends and family of Barbara McGeough.