Sharing the grief of infant and pregnancy loss 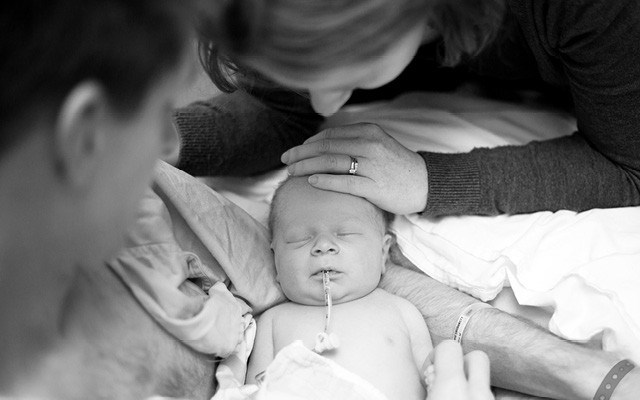 Owen Edmondson will likely be flying among the clouds over the Sunshine Coast for his first birthday on Oct. 30.

Though he won't actually be in the floatplane with his mom and dad, Robyn and Mark Edmondson, his spirit will be there.

Owen's spirit is with them... always.

Owen was just five days old when he died in 2014. For the Edmondsons, as with any new parents, the first year has flown by in a whirlwind. Theirs has been a year of learning to live without their son in their arms, changing their expectations of life as a family of three, and allowing their sadness and happiness to somehow co-exist. It has also been a year of opening up about their grief and sharing it with others and telling Owen's story, which carries on to this day.

"A lot of people have helped us keep the spirit of Owen alive, which has been beautiful, and I think if we hadn't have been so open about his importance to our family, we wouldn't have seen that response," said Robyn. "I'm happy that we've been able to, in some way, support the community while trying to also, selfishly I suppose, help ourselves."

Several months ago the Edmondsons asked Whistler council to proclaim Thursday Oct. 15 as Pregnancy and Infant Loss Awareness Day. The proclamation was unanimously approved. The evening will be marked with a special event at the Fitzsimmons Creek covered bridge, which will be lit up with pink and blue light. It's part of a nationwide campaign to mark the day.

When she read about the council proclamation and Owen's story, Carly Fox contacted the Edmondsons.

"We've just been a little bit of a support system for each other, me being further down the road than they are with an unfortunately similar situation," said Fox.

Labour started fast and furiously for Fox in her home bathroom, too fast for her to get out the door. But Violet flipped into the breech position during labour and got stuck.

The ambulance was called; Fox is not sure how long it took arrive. The infant transport team had to drive up from Vancouver, the weather too bad for them to fly.

A series of unrelated events all seemed to conspire against them into a catastrophic outcome, despite almost a dozen emergency responders rushing to the scene to help.

Violet was born with a severe brain injury.

She died in Vancouver 30 days later.

"We came home empty-handed like the Edmondsons did after a month in Vancouver and tried to remember how to put one foot in front of the other," recalled Fox.

"She just wasn't meant to stay here. She had her own plan."

Still, no one really talks about these life-altering experiences — a subject too difficult to broach, too uncomfortable to find sufficient words, if any even suffice.

"Sometimes there are no words," said Fox. "But hugs are good... hugs go down a treat."

Unlike orphan, or widow, or widower, there is no word to describe a parent who has lost a child, said Christine McLeod, who has also endured the loss.

And yet, it does happen, to so many silent and suffering families. As many as one in five pregnancies end in miscarriage and each year in Canada there are approximately six stillborn infants in 1,000 total births.

Ten years ago, McLeod had a textbook first pregnancy and delivery. Caitlin McLeod came into the world on March 26, 2005 at Lions Gate Hospital.

"The diagnosis was an un-diagnosable metabolic disorder," said McLeod. "What that means, in plain English, is that there was no way possible that they could have known that something catastrophic like that would happen shortly after birth."

The shockwaves spread throughout Whistler like the aftershocks of an earthquake — to their friends with families, to other mothers and fathers who were expecting babies, to her doctor, to the nurse in the hospital who helped them deliver.

The universal tie, said McLeod, for all these stories about infant and pregnancy loss, is that these babies were loved. They may not have lived for very long but, said McLeod, they still mattered.

Unlike years ago when this subject was almost taboo, to be dealt with quickly amid urging to move on with life, times have changed.

"It's actually something to celebrate and talk about," said McLeod.

"Their stories needs to be told and they need to be honoured in some way."

The Edmondsons love to talk about Owen. Time hasn't healed their agonizing grief. But it has brought a new acceptance, a way to carry on in their "new normal."

"It's not that we're healed, or fixed, or we have come to some great epiphany," said Mark. "It's that we're just dealing with coping better."

They had hoped for a life full of soccer balls and parties, play dates and graduations.

Still, there will be seaside adventures for Owen's first birthday and perhaps the chance to fly high in the sky.

"We've had people reach out to us and actually thank us for being so open with our grief because they aren't able to and they think it is time that the stigma is broken," said Robyn, adding that they have no regrets about sharing Owen's story.

Everyone's journey, however, is different.

"I think it has only helped us," she added.

The event to recognize the Pregnancy and Infant Loss Awareness Day in Whistler will take place on Thursday, Oct. 15 at 6:30 p.m. at the Fitzsimmons Creek Bridge.

Bring a candle to light for the International Wave of Light at 7 p.m.

Everyone is welcome to attend to show support for this day.