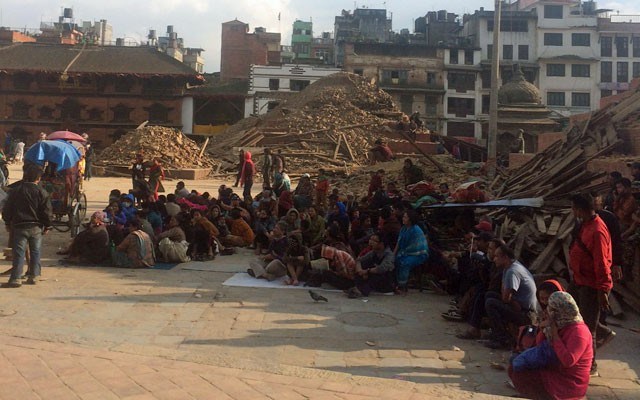 Aftershocks A photo taken by Whistlerite Maureen Harriman of a group of Nepalese citizens who where displaced from their homes following a devastating 7.8-magnitude earthquake that struck on Saturday, April 25. Photo BY Maureen Harriman

Whistler's Dr. Maureen Harriman boarded a flight to Nepal last week with the goal of giving back. But little did she know how badly her help would be needed after a severe 7.8-magnitude earthquake hit just 15 minutes after her plane landed in Kathmandu on Saturday, April 25.

Harriman was in Nepal with a group of ear, nose and throat doctors who were meant to volunteer in villages around the country, but has spent the frenetic days since the quake providing whatever medical aid she can to victims, all of whom are being kept outdoors for fear of structural damage to a nearby hospital.

"There was quite a violent shaking and then chaos at the airport as people ran to get out," Harriman wrote in a text message to Pique on Tuesday, April 28.

"We were there for a few hours but did not realize the extent of the quake," she continued. "We were taken to a hotel, and driving there we saw that buildings had collapsed and thousands of people had left their homes and were walking or sitting out in the middle of the street."

Even with all the devastation that surrounded them, the Nepalese have maintained a positive outlook, Harriman noted. "The Nepalese people are amazing — still pleasant and friendly, almost like they are sitting at a concert gathering rather than having been displaced from homes," she wrote.

While Harriman was originally scheduled to return this Tuesday, her group has decided to stay a few extra days to provide assistance. Her rescheduled flight is set for Sunday.

Harriman wasn't the only Whistler local impacted by the deadly disaster, either.

Jan Jansen, the Resort Municipality of Whistler's general manager of resort experience, was on a hiking trip with his daughter, Semele, on the Annapurna Circuit, a trek that cuts through a mountain range in the north-central area of the country, when the disaster struck.

With no means of communication, Jansen and his daughter still hadn't been heard from more than two days after the quake. Naturally, panic started to set in for friends and family. "It has been a very heart-wrenching time," wrote Jansen's ex-wife, Luisa, on Facebook.

Thankfully, Jansen was able to connect with loved ones late Monday night to let them know both he and his daughter were safe and sound.

The news of the devastation in Nepal, where the death toll has risen to over 5,000 at press time, hit especially hard for one former Whistlerite.

"The first thing that goes through my mind is all the people that are there," said Dianne Whelan, an award-winning filmmaker, whose 2010 documentary, 40 Days at Base Camp, detailed the informal society that regularly sprouts up on Mount Everest at the height of the climbing season.

Whelan has watched several harrowing videos posted by climbers showing the destruction at Base Camp after the earthquake triggered a series of deadly avalanches on the world's tallest mountain that have killed at least 18 people.

While avalanches are simply "part of the soundtrack of Everest" for anyone spending time at Base Camp, Whelan said, this particular snowslide left an indelible mark on her.

"At first glance when I looked at those videos, the reality was my tent ... would've been completely wiped out," she said.

"You can often have a false sense of security about your location, but in watching that avalanche unfold, it was really sobering to realize that we would have definitely been wiped out."

Whelan has spoken extensively before — including at a talk at the Whistler Public Library last year — about the inevitability of death on Mount Everest, as the mountain grows increasingly commercialized.

Even still, she recognizes that little could have been done in this instance to prevent the deadliest disaster in Everest's history.

"All I can tell you is as long as people continue to go to Everest, there's going to continue to be tragedies. Anytime you commercialize an extreme sport like that, that's inevitable."

Considering the massive industry that's been built around climbing Mount Everest, Whelan also understands why native sherpas continue to make the long trek up to the summit — even after many sherpas called for increased pay and threatened to boycott the mountain after 16 Nepalese guides were killed in an avalanche roughly a year ago.

"It is the only job in town, and we're talking about a group of people that used to be some of the poorest in the world," she said, "and the climbing community has shifted them to a place where sherpas are now getting an education and their children are becoming doctors and lawyers, and all of that is a consequence of the commercialization of these mountains."

There are 462 Canadians in Nepal currently who have registered with the Department of Foreign Affairs, but the number of citizens in the country is thought to be higher, as registration is voluntary. It remains unclear how many Canadians have been killed or injured in the disaster.