Should we be thinking about last ascents, instead of first ones? 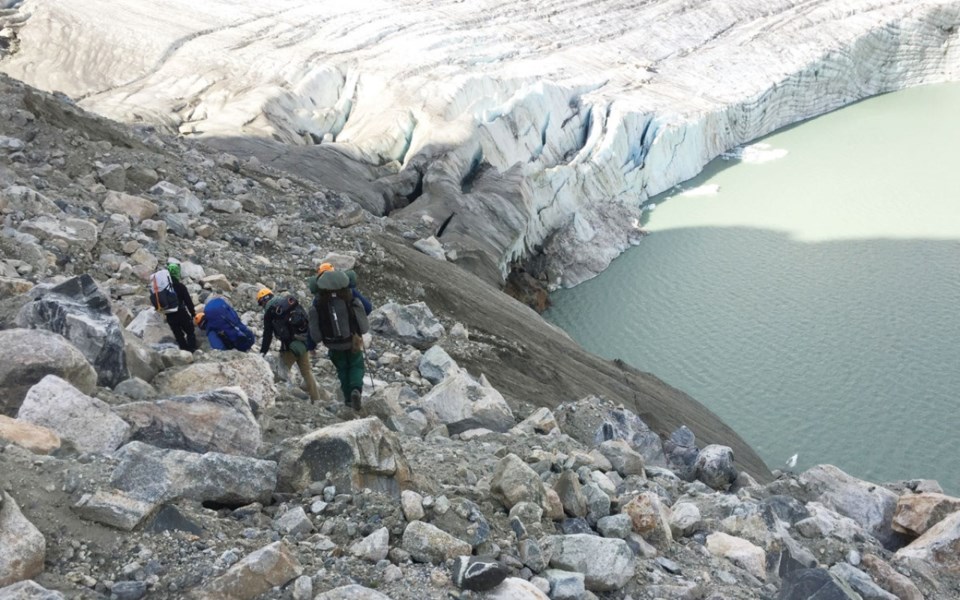 The most common route up Gannett Peak, the highest mountain in Wyoming, follows a gooseneck couloir up a skinny snowfield to a gaping crevasse. Darran Wells, a professor of Outdoor Education and Leadership at Central Wyoming College who studies glaciers in the Wind River Range, says that historically, it's been fairly straightforward to cross, a scramble across a snow bridge.

Over the past few years, however, temperatures have been so warm that the crevasse—technically a bergschrund, where the glacier separates from the mountain—opens up, making it nearly impassable. People who have traversed it before without ropes and found the route fairly easy now find it completely different.

"One of the things I couldn't have imagined, as I started going in to the Wind (River Range in western Wyoming) as a NOLS (National Outdoor Leadership School) instructor in the late '90s, was how the routes would have changed," Wells said recently. "And the emotional impact of seeing the glaciers move and melt."

Wells has seen the toe of the Sourdough Glacier retreat 14 metres in 15 years, making it inaccessible. "There used to be ice and snow that bound up the talus, and that's all gone now," he said, making it harder to climb.

It also impacts the time of day and year climbers can attempt the peak. "The window throughout the year is getting narrower, and then through the 24-hour cycle, you have to worry about rockfall during the day. You're getting up at 1 or 2 a.m., climbing in the dark, getting down before a rockfall. There's a lot more rockfall; it's just a bowling alley."

Safe mountain travel requires stable conditions and fair weather, but as the globe warms, that's becoming harder to find. Glaciers are breaking up, permafrost is melting and mush season is creeping into winter, rendering old approaches inaccessible and new places harder to explore.

As a culture, we've glorified first ascents—and the climbers who attempt them—in the Western U.S. since 1820, when geologist Edwin James first climbed Pikes Peak. The 2018 documentary Free Solo's Oscar win is the most recent sign of our obsession with untouched summits, even as we approach the downslope of accessibility.

A 2017 study from Portland State University (PSU) found that Western glaciers and snowfields—perhaps "the clearest expression of climate change"—may have decreased by as much as 39 per cent since the mid-20th century. This forces a question: As high mountains melt and change, do we need to stop thinking of first ascents, and start thinking about final ones instead? When do we need to give up on these places?

Glaciologist and climber Alison Criscitiello is now prioritizing what she calls "ice memories," recording ice cores from mountains that might soon become inaccessible.

She cites endless examples, like Mount Logan, Canada's highest peak, where the climbing season is shortening and icefall conditions are changing. This is an urgent issue for both the climbing and glaciology worlds.

"Many of these places that hold soon-to-be-lost climate archives are the same places that have drawn climbers for centuries and may too become unclimbable, or at least unrecognizable, in our lifetime or within a few generations," she said.

His group is mapping glacier change in the Rockies, Sierra Nevada and Cascades to try to quantify just how much climate change is impacting glaciers and where they're most sensitive.

The U.S. Department of Agriculture flies over the whole nation every five years, taking aerial photos. Digitized mountain photographs can then be used to compare the outlines of glaciers to historical records. The agency has photo records from some glaciers, including Washington's Sahalie, going back to 1900, after the end of the Little Ice Age. Fountain and his researchers looked at the records and learned that almost every glacier is receding, except for a few that are topographically protected. "The question isn't whether or not they're changing, it's where they're changing less," Fountain said.

For mountaineers, that means they're losing access to climbs like the visually stunning Black Ice Couloir on the Grand Teton, dealing with dangerous rockfall as permafrost melts, and trying to push summit attempts in narrow weather windows. Even the more accessible, frequently climbed routes are changing quickly.

By last August, Disappointment Cleaver on Mount Rainier, the most popular route up to the top of the volcano, was a tricky cheese grater of bridged crevasses and loose rock. Lowell Skoog, who pioneered skiing and climbing routes in the North Cascades, said the period the mountains are climbable is shrinking, the swing between seasons has become more dramatic, and thinning glaciers now reduce access to many popular routes. Skoog doesn't think we'll lose our drive to explore, but at some point the access gap will be so narrow that we won't be able to slide through.

Heather Hansman lives in Seattle, where she writes about water and the West. Her first book, Downriver, came out in 2019. This article first appeared in High Country News, www.hcn.org, on May 13, 2019.