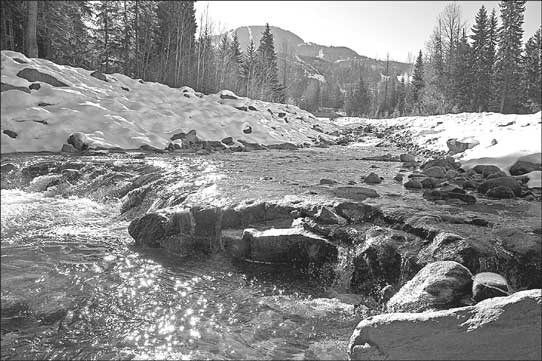 American ski resorts are proving up to the challenge in doing their part to combat climate change, but Whistler-Blackcomb may be going the extra mile.

Rather than purchase green energy at a premium, as Vail Resorts and Aspen Skiing Co. recently announced, the company is trying to create its own renewable energy in the heart of their mountain operations. Their goal: to produce enough energy to match what they consume.

The long-talked about run of river project on Fitzsimmons Creek is still on the table and if tests prove favourable in the next year, a wind farm could also be in the cards.

"Maybe Aspen and Vail don’t have the opportunity to do a run of the river or a wind farm and this is the highest they can reach, and again, I just so applaud it," said DeJong this week in the wake of Vail’s energy announcement. "But I know technically, because the engineering has approved it, that we can reach higher – it is possible.

"We can actually produce what we consume within our own operating footprint."

One project alone could help them achieve just that – a micro-hydroelectric project on the Fitzsimmons Creek.

The project has been through its ups and down ever since B.C. Hydro agreed to purchase energy from the waters of the creek in 2001. Since then, the project developers, Ledcor Power, have been struggling to bring the project to light.

Conflicts arose after Whistler and Vancouver won the right to host the 2010 Olympics when the run of river project fell in the path of the Whistler Sliding Centre – the $99.9 million bobsled/luge track being built for the Games. Though the goal was to piggyback construction of the sliding centre, it has moved ahead while the independent power project has stalled.

Whistler-Blackcomb has been adamant that a right of way for the IPP’s pipe be part of the sliding centre’s design. With that option built in, DeJong is staying hopeful the power project can be developed in the near future.

"It’s the most significant sustainability project we could ever do within our tenured area," he said.

"Whistler-Blackcomb wants to see the project actually happen and whatever partnership arrangement it takes to get it there, our door is open."

To deal with increased costs in developing the project, Ledcor’s plan is to re-bid in the next B.C. Hydro call for independent power projects to see if they can get a better price in an updated Electricity Purchase Agreement; a bid, Boychuk said, that would "accurately reflect the construction environment of today rather than of several years ago."

There is still an interest in seeing the waters of the Fitzsimmons making power by 2010 to showcase green energy. Should everything fall in line, Boychuk estimates it would take one year to complete.

But water isn’t Whistler’s only renewable resource; wind is another option.

Whistler-Blackcomb hopes to have a meteorological tower testing the winds’ potential by October, with the help of Vancouver-based GreenWing Energy. The tower would be placed on the west side of Whistler Mountain.

Mountain wind may be too volatile for a wind farm but they won’t know that until they collect a year’s worth of data.

DeJong said they hope to have a good idea of the potential by the spring, after collecting data over the stormy winter months.

According to the David Suzuki Foundation, wind is the fastest growing energy source in the world, increasing as much as 40 per cent annually in Europe. By comparison, not one active wind turbine is contributing energy to the power grid in B.C. to date.

Vail and Aspen have announced they would purchase 100 per cent of their energy from wind farms through "wind power credits."

That means by paying a premium all the energy they use will be replenished in the grid with wind power.

Climate change specialist Ian Bruce with the David Suzuki Foundation said both the commitment to buy green energy and to build green energy is fantastic.

"It’s great news to hear that Whistler (Blackcomb) is striving to produce all of its electricity needs with 100 per cent clean renewable energy," he said.

And when companies can’t make it themselves, buying it is a good alternative.

"If they purchase electricity through a legitimate renewable energy credit system, as far as we’re concerned, that’s perfectly legitimate and fine because that investment is going to displace dirty power," said Bruce. "That would displace the need for electricity to come through burning coal, for example."

This trend for ski resorts to sit up and take notice of green energy, even at an added cost to the bottom line, highlights a growing undercurrent of concern.

"I think ski areas realize how vulnerable their business is when it comes to climate change and global warming," said Bruce.

With companies like Aspen, Vail and Whistler-Blackcomb making the change, Bruce said it’s just scratching the surface in dealing with this global problem. Ultimately big businesses like these need to be lobbying the government for better environmental regulations. Reversing the effects of global warming will not happen simply by relying on companies to voluntarily make the change, he added.

"I think that the long-term viability of skiing in this country depends on significant action by the government of Canada and other governments to reduce greenhouse gas pollution," said Bruce. "I think it’s great that these companies are looking to clean renewable energy to supply their electricity needs because we need leadership, especially among business in the country, to help address climate change and put significant actions into place.

"That being said, we have a lot of work to do. We’ve just started to scratch the surface and what would be great is if these businesses would urge government to put in place things like regulations and other policies to encourage renewable energy and reduce our reliance on fossil fuels."