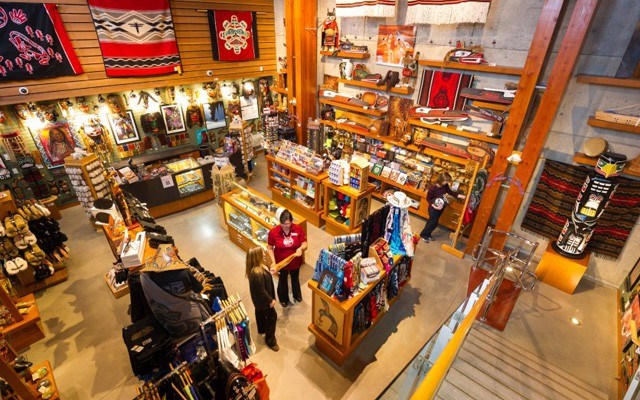 "It's a huge achievement and an honour for us at the Cultural Centre just because our gallery and gift shop really is the heart of the SLCC and it's nice to have the support from Aboriginal Tourism B.C.," said Kimberley Stanger, manager of retail services at the SLCC.

Since opening six years ago, the SLCC has worked closely with First Nations artists to ensure they are properly represented and compensated for their work. Through the gallery's consignment program, artists receive 75 per cent of a sale for their original pieces.

Stanger also pointed to the wide range of offerings available for purchase at the museum as another way the SLCC sets its gallery and gift shop apart.

The award is yet another industry honour for the SLCC, winner of the the Aboriginal Tourism Association of B.C.'s Cultural Centre of the Year two years running, as well as a National Cultural Tourism Award at the 2010 Tourism Industry Association of Canada National Awards for Tourism Excellence. The SLCC's cultural ambassador program also received a Special Experiences designation from the Canadian Tourism Commission in late 2013.

The industry awards were part of the 2014 International Aboriginal Tourism Conference, hosted at the Fairmont Chateau Whistler this week, which also saw the launch of a new campaign that the SLCC will play a crucial role in aimed at better supporting First Nations artists.

As a founding retail partner of Aboriginal Tourism B.C.'s Authentic Indigenous Arts Resurgence Campaign (ARC), the SLCC will support sustainable business practices through a program that engages artists, suppliers, wholesalers, manufacturers and retailers to work together to ensure artists' work is properly represented through the supply chain.

"It's a program that will help consumers and retailers in the future understand what compensation artists have been getting for their designs," Stanger explained. "Up until now, our criteria for authentic art was that the artist's design was represented with their name on the product and their nation. But moving forward, the standards for this new authenticity program are that the artist receive a minimum of a five-per-cent royalty on wholesale costs and that they have control over how their design is being used."

The certification program will use a three-tiered approach providing customers with the necessary information before making purchases in the Aboriginal market. Each level ensures that an Aboriginal artist is the source of the original design, has given full approval of the final product, and has been fairly compensated. Stanger said over 90 per cent of the SLCC's merchandise already meets this standard.

"The ARC campaign is designed to provide unprecedented control over our artwork, while promoting greater awareness of the incredible diversity of Indigenous artistic traditions throughout B.C.," said ARC program manager Shane Jackson in a release. "We graciously thank our partners such as SLCC for their support; these partnerships are instrumental in developing a vibrant and fair Indigenous art market in B.C."

After a solid winter in sales, the museum now gears up for its busy tour bus season, Stanger said. The SLCC will see a 30-per-cent bump in tour bus business in 2014, Stanger said, and will add to its inventory to accommodate the increase as well as expand the retail area into the museum's cafe.

The Squamish Lil'Wat Centre is launching a new exhibit April 25, Our Markings, which will highlight traditional and contemporary markings, including the art and design of tattoos. The opening reception runs from 3 to 5 p.m.

RSVP to Allison Burns at allison.burns@slcc.ca or visit www.slcc.ca for more information.