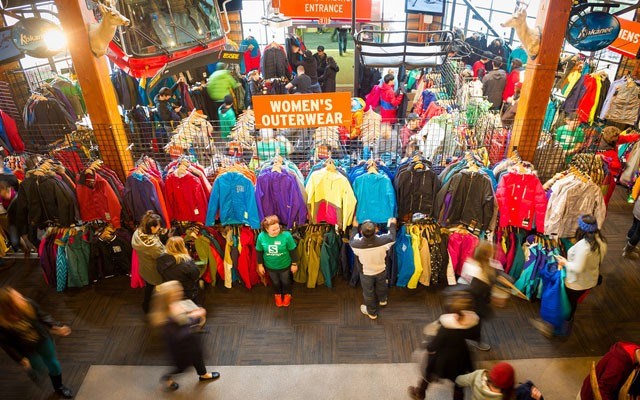 Retail therapy Shoppers make the most of the Turkey Sale earlier this season. Photo by Mike Crane/Tourism Whistler

The Canadian loonie took flight late in 2013 but over the last four months the dollar has lost serious altitude.

Trading of the Canadian dollar is currently about 91 cents compared to the American dollar (Jan. 21). The last time the currency was trading in the 90-cent range was August of 2009.

Tour company owner Allan Crawford is pleased with the downward trend. He said he doesn't watch the dollar comparisons on a daily basis, but he saw how currency values influenced business in Whistler through the 1990s.

"When the people were coming here when the U.S. dollar was strong they weren't asking for discounts and they were leaving big tips," said Crawford of his memories from the 1990s.

"Americans would come here when I was working at the front desk and there would be a group of 10 of them booking our most expensive tour, a fondue dinner. Of the five couples they would be fighting over who would pick up the tab," said Crawford.

The tours are still being booked through Canadian Wilderness Adventures but Crawford said American couples booking with his company as groups don't bicker over who will pay with a strong Canadian dollar, and they pay for their tours using five different credit cards.

There is no doubt the U.S. visitor and the dollars they spend are an important part of Whistler's overall success and that is clearly recognized by Tourism Whistler.

"A drop in the Canadian dollar can provide added value for our U.S. visitors," said Patricia Westerholm, TW's communications manager. "We have the potential to benefit because a stronger U.S. dollar also makes Whistler more attractive for Canadians who would otherwise consider U.S. vacation destinations."

"It does take some time for people to adjust their habits — a significantly lower Canadian dollar over an extended period of time would be more likely to impact visitor behaviour," she said.

Americans powered Whistler's real estate surge through the 1990s courtesy of a long-term weak Canadian dollar. Canada's loonie reached a high value of 89 cents in October of 1991 before nose-diving down to a low of 65 cents in November of 1998. From that low point the Canadian dollar started climbing back up until the fall of 2007 when currency values on both sides of the Canada-U.S. border reached par.

"We haven't seen the phone ringing off the hook from Seattle," Kelly said, but he noted that Americans who purchased second homes in Whistler late in the 1990s got very good value for their money.

"It certainly sets the table for a positive discussion going forward," Kelly said of the current slide in Canada's dollar. "At the same time the dollar is falling, of course, credit availability for non-residents has not gotten better."

Kelly and Crawford both agree that snow has the most significant impact on Whistler's economy. When Whistler has lots of snow tourists come and business across the entire resort picks up.

"The success of the resort as a tourist attraction leads to more interest in real estate in the area," said Kelly.

According to Kelly, the dollar will have to drop at least 10 more cents before it will begin to influence real estate in Whistler.