Nearby businesses, residents made aware of risks/safety precautions
Nov 2, 2007 3:10 AM By: Alison Taylor 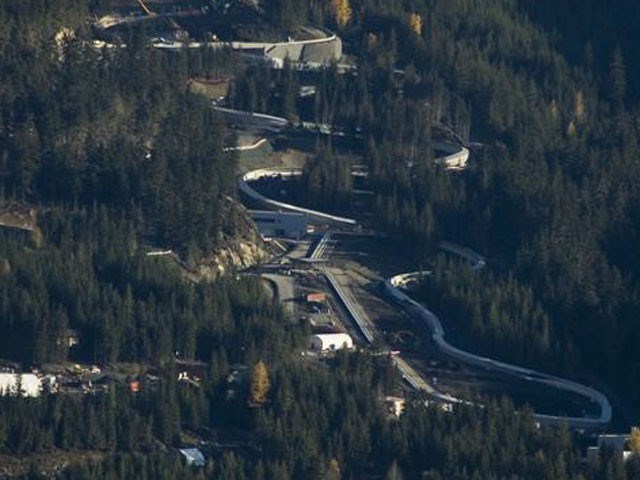 Fast Track View of the sliding cetnre on Blackcomb mountain.

The first delivery of ammonia was funneled into the sliding centre this past weekend, without incident and in time to make ice this winter.

It took three and a half hours to transfer roughly 50,000 pounds of the hazardous material from a transport truck into the track’s refrigeration plant Saturday night. The work began at 6 p.m. and wrapped up at 9:30 p.m.

The process will be repeated two more times until the plant is filled with 150,000 pounds of ammonia, one of the largest storehouses of the substance in North America.

“We had the most work to do with the first charge that comes in because at that point you want to make sure everything is operating properly,” said Craig Lehto, director of sliding sports for the Vancouver Organizing Committee for the 2010 Games.

“The second and third load ins are just like topping it up.”

The work is expected to be complete by early next week.

VANOC contacted the businesses and residents who work and live close to the centre prior to the ammonia going into the plant. Roughly 50 people attended an information meeting last Thursday.

David Udow, co-owner of Ziptrek which operates close to the centre, was aware of the delivery and made plans accordingly. He said they contacted VANOC to let them know when all tours had cleared from the area on Saturday evening.

Ziptrek, like other businesses and residents in the area, is aware they would be evacuated in the event of an ammonia leak at the centre.

“We had to give them our emergency plan in terms of what we do in case of an evacuation, which we have anyhow,” said Udow.

In addition, Ziptrek drivers will be given ammonia awareness training “so they know if they smell ammonia what to do and who to call.”

Ammonia is a common refrigerant used in ice rinks, food processing plants and bobsled/luge tracks around the world. But in high concentrations the chemical will attack the eyes, nose, lining of the mouth, armpits and groin area if a person is exposed to it.

Whistler Fire Chief Rob Whitton offered reassurance, however, that the chances of a leak which prompts an evacuation are very remote. Any evacuation, he added, would last minutes or hours not days and weeks.

“The chances… are 99.99 per cent of it not happening, but we have to be prepared in case it does,” he said.

The fire department has been supplied with HAZ MAT training and equipment from VANOC.

VANOC too confirmed it has several safety measures in place at the sliding centre.

“We worked really closely with all the different authorities and refrigeration experts… to make sure that we’ve got a really safe operation, a really safe plant, a safe design,” said Lehto.

Among other things there are sensitive vapour detectors in the plant that would sound alarm bells in the event of a leak. The plant also has a built-in containment pit that can capture all 150,000 pounds of ammonia.

After the remaining ammonia is delivered in the next week, Lehto said they will get to work making ice on the track.

“We feel really comfortable with the process to date and we’re really excited about how we’re going to bring the facility on,” said Lehto. “It’s going to be a great winter and very exciting to get some sleds down that track finally.”