Sneak a peak this summer

Two Cheakamus Crossing townhomes will be on display in July
May 30, 2008 4:54 AM By: Claire Piech 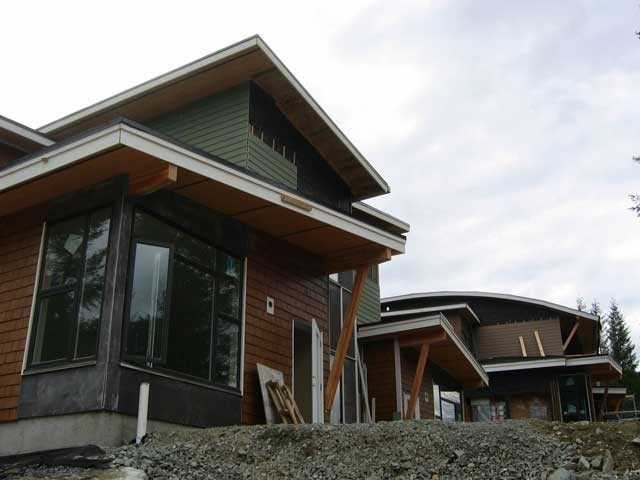 Crossing of the Threshold The outside of the unit going on display come July. Photo by Claire Piech

With the first 40 townhouses in the new Cheakamus Crossing neighbourhood beginning to resemble real homes, and the Whistler Real Estate Company already contacting people on the Whistler Housing Authority waitlist, public curiosity in the development has been roused.

In fact interest is so strong that keeping local Peeping Toms outside the construction site has been a challenge, said Joe Redmond, president of Whistler 2020 Development Corporation (WDC), the group responsible for building what will be the athletes’ village during the 2010 Olympics and resident-restricted housing after the Games.

“People want to know what it looks like, and when you ride along the trails, you can see some of the buildings,” said Redmond.

“We have a guard on duty, but he cannot patrol the whole area all the time, so it has been a bit of a problem keeping people off it.”

To satisfy public curiosity, the WDC plans to get two completed townhouse units ready for display in July.

The display units are located on recently named Whitewater Drive and will be furnished and sectioned off from the rest of the construction site.

Having specific units set up for the public will help prevent people wandering casually onto the site. This is important, said Redmond, as people could get seriously injured walking unsupervised through the construction zone.

A walk inside the first display unit reveals a well-lit, spacious home with four bedrooms, three bathrooms and lots of storage space. Doors are already attached, inside walls are freshly painted white, and wires poke out of places were electrical sockets and fixtures will go.

The ground floor leads into a large space designed for a living room, dining room and L-shaped kitchen. The room is lined with windows, and directly outside, space has been left to build a backdoor patio.

The second of the townhouses contains four bedrooms, including an on-suite master bedroom, and two bathrooms.

According to Redmond, each bedroom is built relatively large because the Vancouver Organizing Committee (VANOC) needs to house two athletes in each room during the Games.

Each unit also has a single-car garage, with enough space outside to park a second car.

“I don’t think people understand the location and the quality of the units,” said Redmond, who recently completed a residence development for the University of British Columbia.

“These units, compared to other employee housing units, are superb. They could be built and sold anywhere. They are more contemporary that what you would normally see in Whistler. The design is not in a ‘chateau’ style, not in the typical mountain vernacular. It is interesting to see the evolution of design.”

With the warmer weather of spring, construction at the athletes’ village site is plowing full steam ahead to get the units ready to hand over to VANOC by November 2009. Redmond estimated 200 construction workers in hardhats and orange jackets filter onto the site each day to prep the land. And the construction site is littered with moving yellow tractors, recently formed gravel piles, and the plethora of trucks and cars that file along the newly built roads, sometimes leading to mini-traffic jams.

Whistler Real Estate Company, the group in charge of selling the approximately 200 resident-restricted homes, will finalize the Cheakamus Crossing waitlist by the end of June, and the contracts of purchase and sale should be completed by December. Pricing will be based on a rate of $231 per square foot.

Marla Zucht, general manager of the Whistler Housing Authority, said even though two other major resident-restricted housing projects — Rainbow and Fitzsimmons Walk — are coming on to the housing market at the same time as Cheakamus Crossing, the authority is not concerned about selling the units.

“With over 750 people on the waitlist, we are not concerned at all. There is enough demand out there,” said Zucht.

“It’s a good diversity of product mix, and it will really hit the whole spectrum of our waitlist.”

Zucht added that even though Rainbow involves 150 units, not all units are coming on to the market at the same time for pre-sales. Only 24 duplexes and13 single-family homes will be sold in 2008.

That, coupled with the 36 resident-restricted units at Fitzsimmons Walk, should not be problematic for selling the 200 units at Cheakamus Crossing.