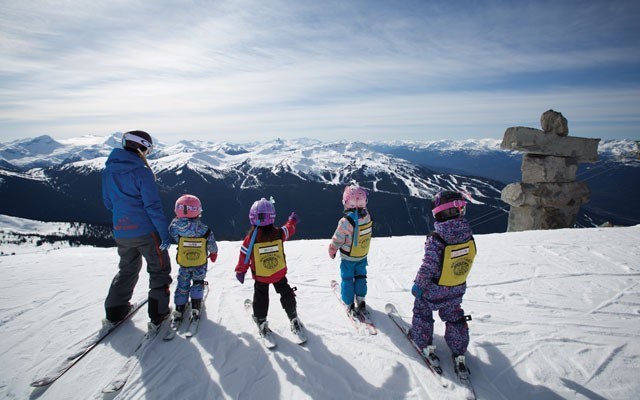 Some Whistler parents are coming up with alternative plans for the winter ahead after learning that Whistler Blackcomb (WB) will not run snow school programming for kids under seven this year due to the COVID-19 pandemic.

Popular programs like Kinder Kids, Valley Kids, and Weekend Club programs have traditionally served as both a way for local kids to learn to ski or snowboard, as well as reasonably priced childcare for many.

“Obviously, this is an extremely difficult decision,” said Marc Riddell, director of communications, West Coast, for Vail Resorts. “It’s not something we jumped willy nilly into. We looked at all the factors in play for all our programs to see where we could deliver. Safety is the thing that we’re [focusing on] this year. It’s the only way that we’re going to be able to open and remain open for the duration of the season.”

To that end, WB decided to forgo the kids under-seven programming for a few reasons: it’s harder to maintain social distancing with young children; those programs require more time indoors; and logistics around loading chairlifts would be challenging.

To the last point, typically, there are four kids per instructor. Two students ride the chairlift with that instructor while the other two hop on another seat with another adult.

But this year, “we didn’t want to expose one of our guests to a random guest,” said Russ Wood, senior director of snow and bike school with WB.

“We feel like we can handle that comfortably at a relatively small number of kids, but blow that up to the number of kids we have in our season-long programs and we just aren’t comfortable we can execute on that,” Wood added.

While local parents understand the pandemic has upended many aspects of life, one common issue they had with WB’s messaging around the program cancellation was the suggestion that they could consider private—and much more expensive—lessons as an alternative.

“I understand there’s not enough staff and COVID makes it difficult,” said Amanda Wilson, who has one child affected by the changes. “But they responded suggesting we put our children in private lessons … Most people would take their kids out of daycare and put them into ski school. It’s causing some issues with childcare and most people weren’t expecting it.”

Shelly Bortolotto, another parent, pointed out that many WB employees themselves rely on the program for childcare. While she’s been laid off from the mountain and no longer relies on the program, her Kindergartener was hoping to improve on ski skills this winter.

“She doesn’t require daycare, but she’s not a strong skier and I wanted her to get that extra day in with an instructor,” she said.

Bortolotto also questioned the logic of the drop-in private classes, which, potentially, would see local kids paired up with visitors, rather than being with the same faces each week with ski school.

“I’d be comfortable having my child with the same little group, provided they were doing all the same cleaning and hand-washing processes as they were doing with ski school at the end of March,” she said.

WB said private lessons for kids under seven would be either limited to two kids or involve a parent attending to help.

“What we expect to see is a lot more family lessons or fewer kids in the private lessons,” Wood said.

But Patrick Smyth, whose daughter has been in everything from gymnastics to soccer and ballet during the pandemic, said he wondered why so many kids programs were able to work within safety protocols, but not this one.

“Has it affected my bottom line? No. It’s just another kick in the pants,” he said. “I like spending money on the mountain. I like being a customer, but they’re not letting me.”

WB has two pieces of good news for parents though. First, they will be sending out information soon on the different ways parents can use their credit from last year’s ski school, which was cut short when the mountain closed.

“We are going to open up that credit to apply to more than just a season-long program,” Wood said. “And, fundamentally, if that program doesn’t work for the parents, we’re going to make it right wherever we can for the parents we can’t help out this year.”

Second, despite rumours, ski school for Whistler’s youngest will be back, he added.

“I think it’s actually been a great affirmation that this is important, that this needs to continue to be a core part of what we do within the Whistler Blackcomb snow school,” Wood said. “Assuming things go well [with the pandemic ending], our regional programming is here to stay. It’s a really big part of what we find is important and how we can contribute in the regional business.”