Snowmaking may be key to future 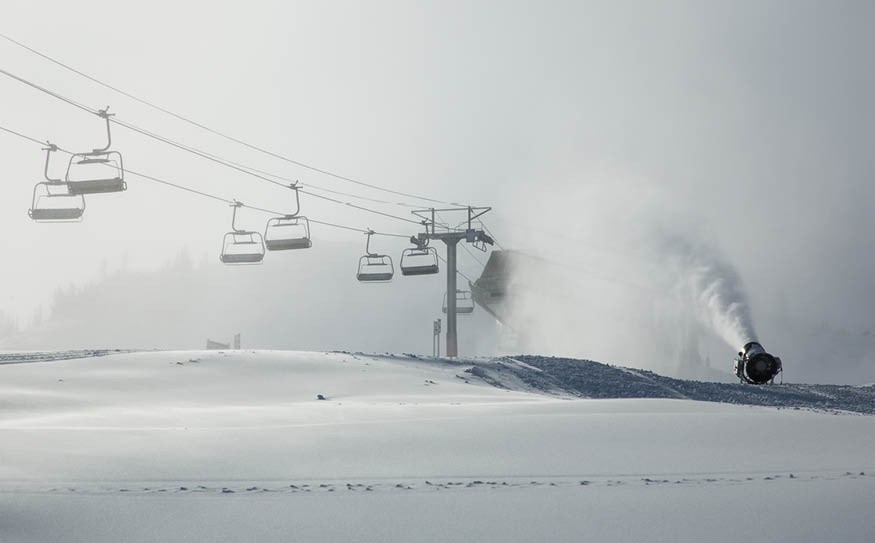 Given the consensus among scientists that global climate change is happening and is, to a degree, irreversible at this point, the next step is looking at the impacts and figuring out a way to mitigate them.

For the ski industry, especially on the eastern side of North America, survival may be a matter of making snow and preparing for shorter seasons.

Daniel Scott, the director of the Interdisciplinary Centre on Climate Change at the University of Waterloo, has been working on climate models for the ski industry since 2003, creating a model that looks at a number of different scenarios for snow, including temperatures, precipitation and the use of snowmaking. According to a study he will publish in 2013, over half of the 103 ski resorts in the northeast will be able to open for over 100 days per season by 2039.

Moreover, the worst-case scenario suggests that skiing may not be economically viable in several coastal and low-lying resorts, or in places like Western New York State where "lake effect snow" could turn into "lake effect rain."

"My colleagues have done climate modelling stuff since the 1980s, but the problem with that early work in Europe and North America is that they never included snowmaking in their assessments, which is a little like modelling crops without looking at irrigation," said Scott. "What happened is that climate change studies on skiing, when relating to Colorado, were looking at the snowpack on April 1. That's really a hydrological indicator to show how much snow on the mountains would turn into their summer reservoir of water. But it's meaningless for skiing. Saying the snowpack will be 25 to 50 per cent less in 2050 then now doesn't mean anything. Who cares when the snowpack at that time of the year is measured in metres, and half of it is still ample."

Using his model, his department has looked at resorts in Ontario (2003), Quebec (2007) and areas like New England, Banff and Colorado more recently. Their model is also being used elsewhere, including Austria and Australia.

Scott's message isn't all gloom and doom, and his studies usually include best-case scenarios as well as the worst, plus everything in between. However, given the amount of carbon in the atmosphere, he says climate change is coming whether we take dramatic steps to mitigate it (the best-case scenarios) — or not (the worst case scenarios).

"We look at what's happening on opposite ends of the spectrum and report both," he said. "Part of our message is that there is a range of uncertainty here... we can't avoid all of the (climate change) impacts and the longer we delay emissions reductions, well then the writing is more or less on the wall, so to speak. But if we can achieve those lower emission scenarios, those impacts are much less."

In the meantime, Scott's coming report makes a strong case for a greater reliance on snowmaking, although he appreciates that it won't be economical for all of the affected resorts.

"It may be required," he said. "Some resorts may only have snowmaking on the bottom 25 to 30 per cent of their terrain, and they may have to move that up but a lot has to do with access to water and what they technically can put on their ski product on the hill. As for whether that's economic, only ski areas can know that."

In some cases, however, even snowmaking may not be enough.

"It's not doom and gloom for the entire ski industry, which is what the media has portrayed in previous studies. What we see when we model all 103 resorts (in the northeast) is that we'll get a contraction and concentration of the ski industry into high elevation areas of New Hampshire, Vermont and Maine. Closer to the coast, in Connecticut and Massachusetts, it may not be as viable because you get a moderating effect of the ocean and warmer temperatures. A few resorts (could) fall out of the system because they can't physically make enough snow with a sufficient amount of warning — they'll actually run up against the physical limitation of what snowmaking can do for them.

"Take an area like Western New York, where areas like Buffalo get lake-effect snow — wet air crosses Lake Erie or Ontario, hits cold land and dumps as snow — it's what we get in Southern Ontario as well, which is why all the ski areas are strategically located. But as things warm up, some of the precipitation starts to fall as lake-effect rain, where you get a double hit; not only are you missing out on your big masses of natural snow, but all the snowmaking you do gets washed away."

While Whistler Blackcomb's own climate modelling suggests that snowfall could be reduced at lower elevations in the future, and they've made a huge investment in snowmaking to offset that, one of the resort's key concerns has always been the overall health of the industry, and the number of people getting involved with the sport. Fewer resorts could mean fewer new skiers, and therefore in the long run fewer potential customers that would come to Whistler.