Soldier On returns to Whistler 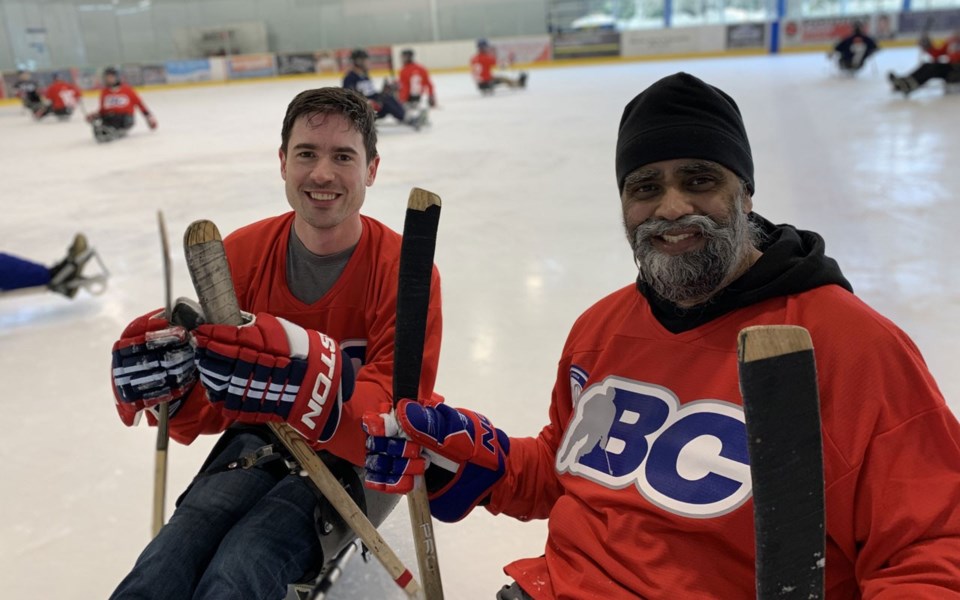 WHILE WHISTLER prepares to celebrate the 10th anniversary of the 2010 Winter Paralympic Games next month, 34 soldiers and veterans are already carrying on the spirit in the resort through the Soldier On program.

Canada's Minister of National Defence Harjit Sajjan and local MP Patrick Weiler were on hand to join the group in a game of sledge hockey at the Meadow Park Sports Centre on Feb. 21.

"Patrick I would say was playing, I was there just surviving," Sajjan joked.

"I love coming to Whistler any time, but this is always a special part of the year when Soldier On is here."

The program—which uses sport to rehabilitate disabled members and former members of the forces—has been coming to the resort since 2011, Sajjan said, allowing participants to tackle activities like skiing, snowshoeing, skiing and ziplining (to name just a few).

"Whistler has been absolutely fantastic in hosting them," the minister said. "Having the soldiers from the U.K., Australia, the U.S. and obviously from Canada here to use sport as a way to come back together, rebuild a camaraderie that they're so used to, and help each other to heal, in their own way, it's a really powerful experience."

For Weiler, it was his first time trying sledge hockey, though he said he was helped along by some pointers from two-time Paralympic sledge hockey medallist James Gemmel.

"I think the minister is being a little bit too kind about my sledge hockey skills," Weiler quipped.

"It was an incredible event to be a part of, and really it is an honour to be able to really show the respect to people who have served for our country and other countries, and to just participate in this event where you have all this camaraderie that's built."

Sajjan—who served with the Canadian Army from 1989 to 2015, including three tours in Afghanistan—said he often runs into people he served with at Soldier On events.

"It is so neat ... it creates the atmosphere of how sports can bring people together, you can put your positions and rank and appointments aside, and just be there and talk and support one another," he said.

"And that's what this really is about ... you talk less about the sport and what you're doing; it actually is more about learning from one another, and then these friendships are made."

Whistler is set to celebrate the 10th anniversary of the 2010 Winter Paralympic Games from March 12 to 21. Find a full schedule of events at whistler.ca/2010anniversary.

Read more about the Soldier On program at soldieron.ca.