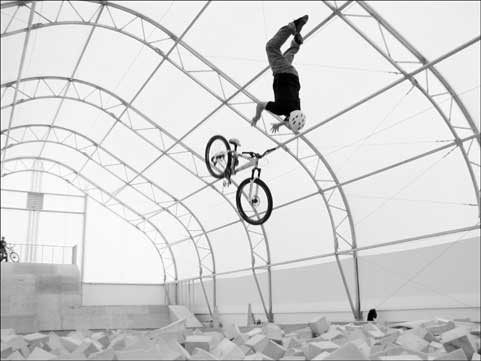 Whistler-Blackcomb opened the Air Dome at Base II to the public this weekend, giving mountain bikers and BMX riders a chance to safely practice tricks into a giant pit filled with $26,000 worth of foam.

The Air Dome was opened to bike camps earlier in the season, but will be open to the public at least until Oct. 9.

The dome includes an in-ramp, a selection of kickers into the foam pit, and a wood table. In the near future there will also be features like a wall ride and quarter pipe.

"Opening weekend was actually pretty good, considering the nice weather, and we’re pretty happy how it’s growing right now," said Rob McSkimming, vice president of business development for Whistler-Blackcomb. "We had anywhere from 20 to 35 users a day for the first four days, and we’re happy with that considering it’s new and only so many people can fit in there anyway."

Most of the riders are mountain bikers, although BMX bikes are also permitted to use the facility.