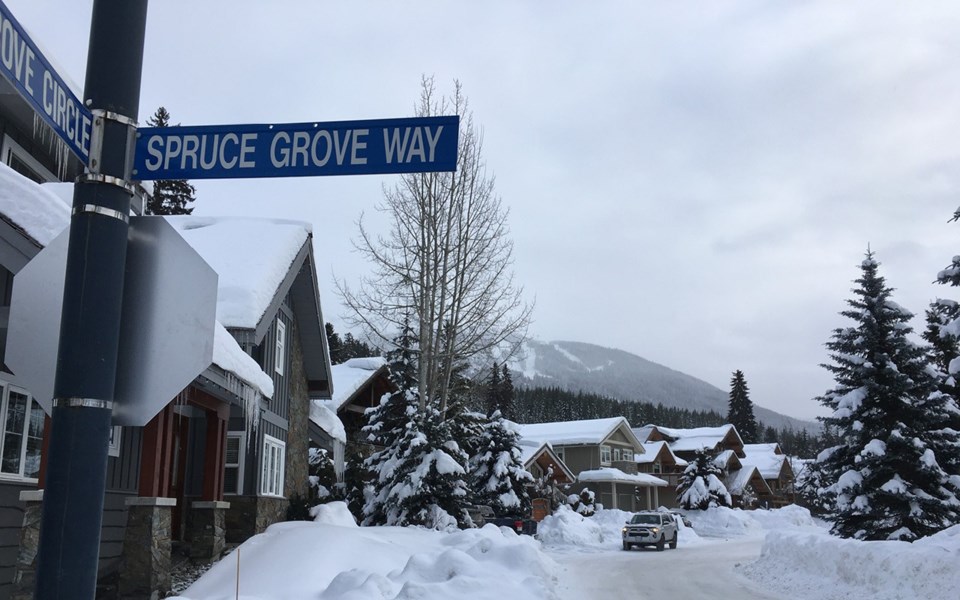 Some Whistler homes in the Spruce Grove neighbourhood saw a jump in assessed value well above the five per cent average. Property owners have until Jan. 31 to file an appeal with BC Assessment. Photo by Braden Dupuis

When Dale Tiessen received a "pre-assessment" letter in December from BC Assessment warning him of an impending spike in his property value, it took him by surprise.

"I was kinda shocked, because we got a pre-assessment letter [that said] 'Oh by the way, we're sending you a pre letter because we don't want you to be shocked when you get your assessment,' ... well that actually shocked me," Tiessen said with a laugh.

While Whistler's assessed property values for single-family homes rose by five per cent on average last year, according to BC Assessment, Tiessen's assessment on his Spruce Grove home showed a 19-per-cent increase.

Though he's previously owned land in the Lower Mainland and elsewhere in Canada, it's the first time he's received such a pre-assessment letter.

Tiessen talked to some of his neighbours and learned that some of them are experiencing similar increases.

A house similar to his—a single-family home with a Whistler Housing Authority (WHA) suite—also got a pre-assessment letter, while a full WHA house across the street did not.

In determining property values, BC Assessment looks at a variety of sales that have taken place in or around your neighbourhood, said Brian Smith, deputy assessor for the Lower Mainland.

"[Property owners should] look at some properties that do have some similar features to the subject property or to the owner property to give you an indication as to whether or not the assessment that we have based on the sales that we are providing seems reasonable," Smith said, adding that comparable properties are determined by things like location, size and age of the building, size of the lot and views on the property. "If there were situations like this where it doesn't make sense on those comparable sales, that's when we encourage people to give us a call and we're able to provide some information that may be able to assist with that matter."

In Tiessen's case, one comparable he found to his property isn't really all that comparable at all.

"So bigger lot, bigger house, on a dead-end street, overlooking Whistler Golf Course. And I thought well, I have a WHA suite in my house, I live on a road that I actually am fronted by roadways on both sides of my property, so I don't get a lot of privacy.

"They don't compare, but that was the closest comparable that I found."

With Resort Municipality of Whistler property taxes rising or falling in relation to the relative change in value of your property, residents like Tiessen could be seeing a stark increase in their tax bills this year—and the increase in value has also pushed him past the threshold for the homeowner's grant, he said.

He has already filed an appeal with BC Assessment.

Property owners must file their appeals by Jan. 31, and disputes are handled by an independent, three-person property assessment review panel, Smith said.

"They take a look at the evidence that is presented in front of them, so BC Assessment would use the sales that they feel that have sold within the area that would be similar to the subject property, and the homeowner or the property owner would submit that same type of information, saying 'here are three or four sales that I feel better support the value of my property,'" Smith said.

"And then that three-person independent panel will make a decision based on the evidence that's presented in front of them, and then give their decision at the end of that 30-minute appointment."

All property owners pay taxes due on the amount of the original assessment notice, according to the Resort Municipality of Whistler (RMOW).

"In the case of a successful appeal and a revised (lower) assessment amount, the appellant would receive from the RMOW a refund for the difference (between what they had paid and the amount due on the lower, reassessed value) plus interest," a municipal spokesperson said.

In speaking out about it, Tiessen said he's hoping other homeowners will get informed, understand not to just inherently trust the data that's provided, and do some due diligence and ask questions when they come up.

"I'm happy to pay the taxes; the RMOW uses those all towards really good things. I was just sorta scratching my head when I got this notice," he said.

"I'm actually quite optimistic that the system will work the way that it's intended to, and that logical people acting reasonably will come to some conclusion ... I'm sure my property value has gone up, I just don't think it's gone up to the degree that my assessment value has."