Historic Himmelsbach Hut being relocated to Sproatt
Aug 14, 2020 10:00 AM By: Braden Dupuis 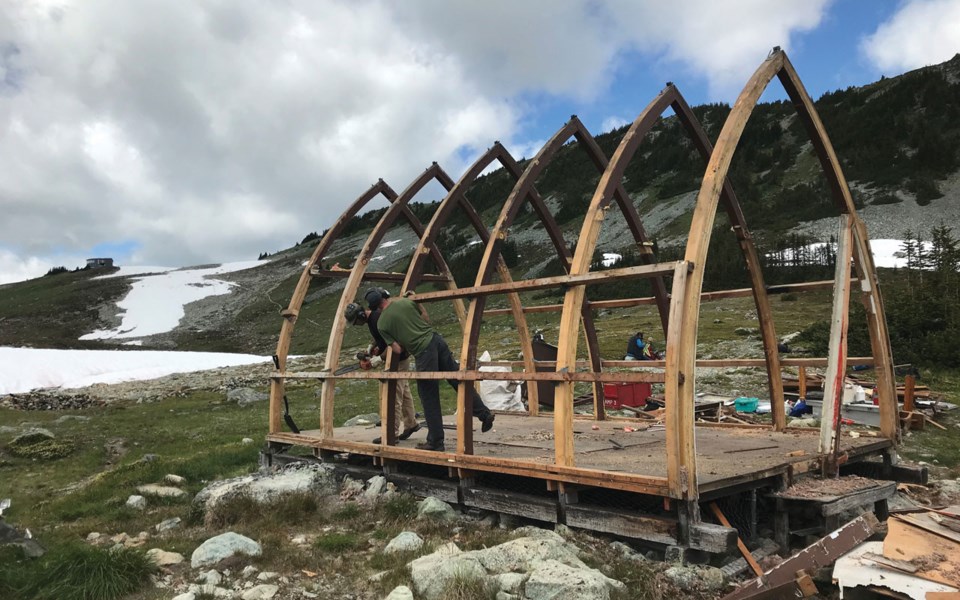 The historic Himmelsbach Hut, built in 1965, was recently relocated to Mount Sproatt. Photo courtesy of the RMOW

Whether it was avalanche conditions in January and February or the complications of a global pandemic, it hasn’t been a banner year for the Spearhead Huts Society (SHS) to date.

“You couldn’t ask for a more challenging year to open up a hut,” said SHS president Jayson Faulkner.

“It’s really unfortunate, but, hey, it could be a lot worse.”

Challenges aside, the SHS’ Kees and Claire Hut—the first of three huts planned along the iconic Spearhead Range in Garibaldi Provincial Park—officially opened for bookings on Aug. 7, with some new COVID-19 precautions in place.

The measures were built to follow provincial health authority guidelines, but also those of the Alpine Club of Canada, Faulkner said.

The hut is available for single-group bookings of up to 16 people, with a flat rate of $2,400 for three nights (Friday, Saturday and Sunday).

Once a group leaves, custodians will clean and sanitize the hut, allowing plenty of lead time before the next group arrives, Faulkner said.

“We were hopeful, given the space that’s available in the hut, that we would be able to do four groups of four, because they could each have their own sleeping quarters, they would have their own cooking station, and they could easily socially distance from one table to the next, as it were,” he said.

“But we frankly couldn’t get the OK from BC Parks on that.”

Visitors to the hut won’t require a day pass from BC Parks, Faulkner added.

“I think it’s one of those things that, as time goes on, we’ll see what kind of response we get and modify things as they go,” he said.

“And of course we’re looking ahead to winter and trying to figure out how do we make this work in the wintertime, too.”

Returning visitors will notice some changes on the landscape this year, as the historic Himmelsbach Hut on the northern shore of Russet Lake is being* relocated by BC Parks to Sproatt Mountain, where it will serve as a base for search and rescue.

“I think it’s a good idea. It’s a great use of it. Certainly Werner [Himmelsbach, the hut’s builder] is happy with it,” Faulkner said of the hut, which was built in 1965.

Himmelsbach—credited with coming up with the Gothic A-frame hut design—built the hut in his basement before it was flown up in pieces, Faulkner said.

“The glue lams, they got assembled onsite, and the base floor and all the rest of it, so it’s a testament to the quality of the build and the design that it withstood so many years in such a harsh environment,” he said.

“There’s some great stories around it, so it’s really nice to keep that alive, for sure.”

While the SHS has a funding commitment for a second hut on Mount Macbeth, “we really backed away from pushing or pursuing that over the last year and a bit, just because we had our hands full,” Faulkner said, adding that the society hopes to get going on prep work at the Macbeth site this summer.

“If all goes according to plan, we’ll get a submission of our designs to parks in the fall, and in a perfect world maybe start doing some prep for construction next summer.”

*An earlier version of this story implied the Himmelsbach Hut relocation is complete. While the foundation has been poured, reconstruction of the historic hut has yet to begin.