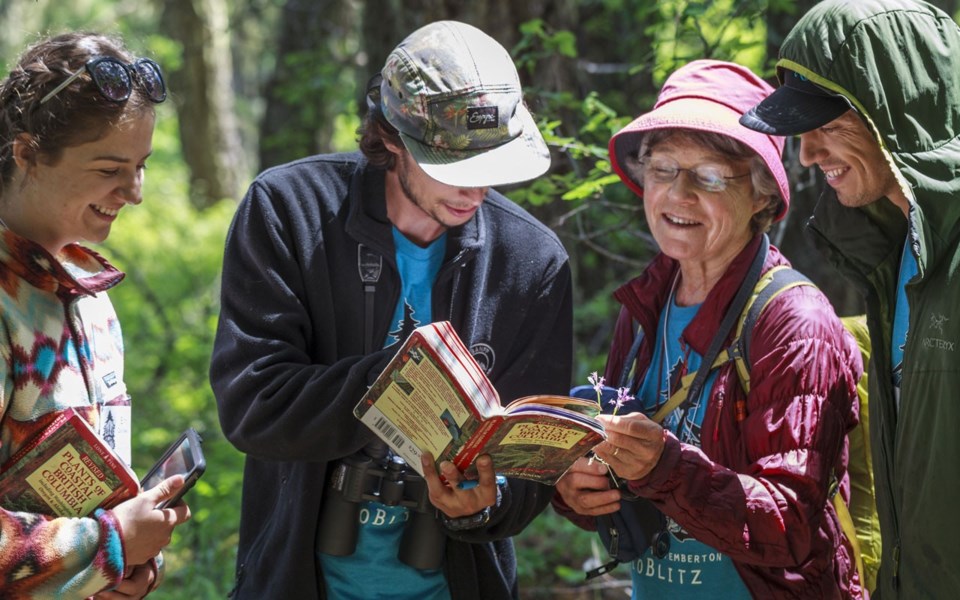 BIOBLITZ Judith Holm, centre, identifies plants with a team from the Sea to Sky Invasive Species Council at the 2019 Whistler BioBlitz. Photo by Joern Rohde / Courtesy of the Whistler Naturalists

Thirteen years into Whistler BioBlitz, the annual race to count as many plant, insect, fungi and mammal species as possible, and you'd think the initiative would have slowed down.

But, according to organizer and Whistler Naturalists' founder Bob Brett, that's not likely to happen anytime soon.

"It's remarkable how similar it's been every year. I'd say we've averaged about 600 species (tallied) a year in the weekend ... and we probably average 100 new species every year, and that's been pretty much constant, which is surprising," Brett noted. "Theoretically that number should taper, but it hasn't yet."

Part of the reason the species count has remained consistent, Brett explained, is due to the specialized experts that take part—there were approximately 60 scientists participating this year, from June 6 to 9, including a beetle and ant researcher.

"This sounds pretty crazy but having an ant specialist and a beetle specialist is really important because there are hundreds of species of ants and potentially thousands of beetle species that haven't been looked at before," Brett noted. "It's not that a vast diversity of beetles and ants don't occur here, it's just that they haven't been documented before."

A final species count has not been firmed up, and could, in some cases, take months as volunteer scientists work to identify all the species they've tallied.

Roughly 4,200 species have been recorded in Whistler over the event's existence.

A highlight of the event was the expedition into the Callaghan Valley, near Olympic Park, where Brett said it's not unusual to find stands of 1,000-year-old trees.

"We had tree climbers go up a 1,000-year old yellow cedar and they brought back a whole bunch of moss and lichens," Brett noted. "It's not the moss and lichens that are necessarily the interesting part, it's what's inside of them. They're being taken back to SFU and they'll extract out all the spiders and mites and insects and whatever else."

Brett explained that researchers also observed several Western toads in the Callaghan, despite not having recorded any breeding grounds in the area.

"Presumably there are at least one or two major breeding sites there and it just gives another indication of where we'd find them," he added.

"The main reason that I think of for studying species and documenting where they are is all about habitat," he said. "The ultimate goal is to protect all different types of habitat in undisturbed states wherever possible."

BioBlitz continued its educational emphasis this year, with a public talk on Friday on old and ancient trees as well as participating scientists visiting local schools. In all, the scientists spoke to around 600 students at Myrtle Philip, Spring Creek and the Whistler Secondary School.

"I think kids who might already have an interest in nature might have that much more enthusiasm knowing that people do this for a living and this is cool," the Whistler Naturalists' Kristina Swerhun explained. "Then, the people who might not have too much experience, this might be their first taste that there is more out there than the trails that they can look at. Some of the younger kids might not have studied what we presented about, but I was in school both days, and all the kids had smiles and wonder on their faces."

BioBlitz also drew attention to the plight of logging in old-growth forests in B.C.

"It is not what should ever be characterized as sustainable resource management," Andy MacKinnon, retired professional forester, professional botanist and councillor for the District of Metchosin on Vancouver Island, told a packed conference room on June 7.

"I have been banging my head against the wall through two successive governments in a decade (on this issue), and the current NDP government is logging at least as much and maybe a little bit more old growth than the previous Liberal government.

His comments came just one day after 17 MLA and government offices were targeted by demonstrators calling on the B.C. government to "take immediate steps to save the few remaining intact areas of old-growth forest on Vancouver Island and endangered old-growth forests across the province," according to a release by the Sierra Club BC.

Today, 79 per cent of the original productive old-growth forests (trees over 250 years old) on Vancouver Island have been logged, including 90 per cent of the valley bottoms where the largest trees grow.

"B.C.'s coastal temperate rainforests are among the rarest ecosystems on the planet, but today less than 10 per cent of Vancouver Island's largest old-growth trees are left," the Sierra Club release went on to say. "The current rate of old-growth logging on Vancouver Island is more than thirty soccer fields per day or about 10,000 hectares a year."

Both the BC Chamber of Commerce and Union of BC Municipalities have asked the province in recent years to take steps to protect old-growth forest, recognizing that there is often a strong economic reason to keep the trees standing, as they are strong drivers of tourism.

Whistler generates $1.37 million in daily tax revenue from its economic activity, most of which is driven by tourism.

This year in Whistler, local groves of old growth will also be logged as part of the plan for the Cheakamus Community Forest (CCF).

To help raise awareness of Whistler's old and ancient trees, BioBlitz launched a pocket-sized map, which locates some of the area's most iconic trees. Created by Brett and supported by the Association of Whistler Area Residents for the Environment, it is available at Armchair Books.

Also speaking at the presentation was big-tree hunter Shaun Muc, who encouraged everyone who hikes, tours or gets out into the backcountry to look for ancient and old trees.

"It is humbling to stand before these giants," he said. "Take the time to really look at them and imagine what they have survived over the hundreds of years they have been on this Earth."

If you find an ancient or giant tree, nominate it to the Big Tree Registry, said Muc, who is on the Registry's committee.

(To email your big-tree information and to find out how to measure one, go to https://bigtrees.forestry.ubc.ca.)

The Whistler Naturalists also invited Expedition Old Growth to tree-climb some of the old-growth trees and collect samples from their ecosytems. The company uses low-impact rope access and modern ecologically ethical climbing techniques to explore and expose the importance of the biologically rich and stable environments associated with ancient trees.

"The canopies are an area that are very underrepresented and under-explored and we want to share that with people, so we are trying to get people stoked on the unique environments that we get to see pretty much on a daily basis," said arboculturist, professional tree climber and canopy-access specialist Matthew Beatty.

-with files from Clare Ogilvie