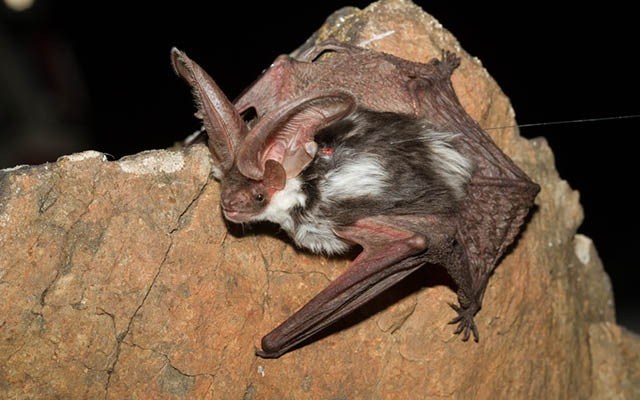 RARE FIND The elusive Spotted bat was captured near Lillooet by a team of researchers in late December. Photo by Jared Hobbs

On a research expedition near Lillooet in late December, a team of specialists netted a rare find — the elusive Spotted bat.

"This is not an easy bat to capture, which explains why we know very little about Spotted bats, one of the most striking looking bats on the continent." said researcher Cori Lausen in a press release.

Fewer than 20 have ever been captured in Canada.

Local biologist Bob Brett wasn't on the mission, but has worked with Lausen before.

"They're really rare," Brett said, of the bats. "They're hard to find — or hard to trap — and they wouldn't occur in Whistler."

The Spotted bat is more attuned to open grassland areas, he said.

"Their range is in kind of the northern extension of the semidesert that comes up from the U.S., such as Osoyoos and Lillooet and that area," Brett said.

Once the bats were captured, researchers placed small radio transmitters on them to trace their movements.

The resulting data will help researchers learn more about the roosting and foraging habits of the elusive species.

With that data, researchers can better prepare for the effects of White Nose Syndrome — a devastating fungal disease that has been killing North American bats by the millions.

The disease is expected to hit B.C. within five to 10 years, said Purnima Govindarajulu, a small mammal specialist with the provincial Ministry of Environment.

"We're feeling this urgency to learn more about our bats before this devastation hits," Govindarajulu said.

B.C. is home to 16 confirmed bat species — the most of any province in Canada — and losing them to White Nose Syndrome could devastate local ecosystems, Govindarajulu said.

"The ecological and economic value of bats is just huge. They're tiny but they have a huge impact through pest control," she said.

"That's a huge amount of pest control, and we just get that for free by having a healthy ecosystem," she said.

"So if bats disappear, it's going to have an impact in many ways, through destruction to plants and forestry, in agriculture, everyone's going to feel it."

Right now, there is no magic bullet solution to what some ecologists are calling the biggest wildlife crisis of our time, but increasing knowledge bases around bats is an important first step, Govindarajulu said.

"We're just starting to increase our knowledge and figuring out, are bats active in the winter? Where do they go in the winter? How many bats do we have?" she said.

"And then we combine our local knowledge with the tremendous research that's going on in Eastern Canada where they're actually facing the mortality, and then we'll combine the two."