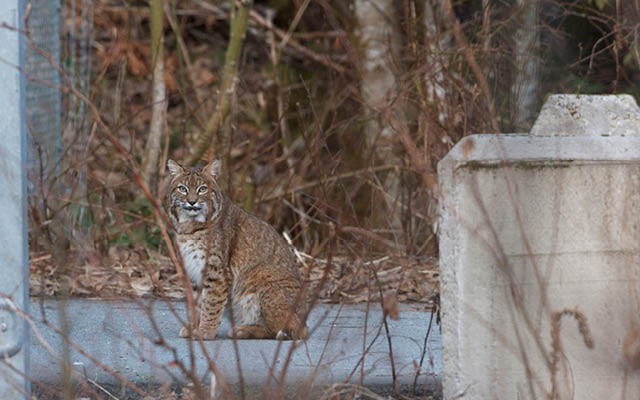 cat concerns A bobcat reportedly attacked two different dogs near Fawn Lake in Squamish over the course of the morning on Monday, April 14. file photo by michael allen

Marie Grindlay was not expecting her Alice Lake dog walk to turn into a violent wildlife encounter for one of her pets.

She was out walking April 14 with dogs Freyja and Shasta when she learned from another hiker that a dog had been attacked in the area 15 minutes earlier by a bobcat.

"We were loud," Grindlay said, explaining that she was worried the bobcat might still be in the area near Fawn Lake. "I was extra loud, yelling at the girls. All of a sudden this bobcat came out of nowhere and attacked Freyja, my little dog. The bobcat was about the same size as Freyja.

"Freyja did a pretty good job of defending herself."

The bobcat disappeared for a moment then reappeared. Grindlay's other dog, which is bigger, approached the cat as it tangled with Freyja. Grindlay said her bigger dog had a stick in its mouth. Shasta intimidated the wild animal by staring at it until the bobcat backed off. Grindlay was able to get her dogs moving down the trail. The bobcat didn't chase them.

Freyja wasn't hurt in the scrap.

Black bear researcher, and Whistler Blackcomb wildlife tour guide, Michael Allen has been keeping tabs on bobcats living around his home for the last four winters.

"I think I live on the route in Paradise Valley of a resident male, so I would see him occasionally," said Allen.

He gained some knowledge of the animals by tracking the resident male that crosses his property. Allen said he started tracking a resident female and a few other cats. He documents their movements by capturing images using remote cameras.

Allen said bobcats are small and relatively harmless, with a diet that consists mainly of rodents, hares and rabbits. There are very few reports across North America of humans being hurt by bobcats, he added.

Allen encourages dog owners to keep their pets on leashes.

"There might be a resident male or a resident female, maybe she's got a den and she's having kittens," he said. "This is the time that they have them and if a dog is bugging her every week, or every three or four days catching her scent then she's probably just defending her area."

The Conservation Officer Service is interested in bobcat sightings. The number to call and report an incident or a sighting is 1-877-952-RAPP.