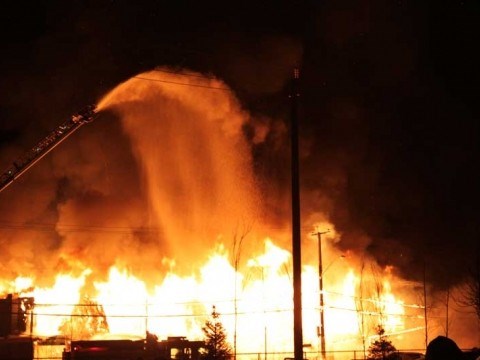 The fire spread so quickly that residents of a townhouse complex in Squamish were only able to save themselves, their pets and a few personal belongings on the morning of Dec. 13.

All eight townhouse units in the complex on Government Road were completely destroyed in the blaze and there was significant damage in the next complex over as a result of the searing heat.

At press time the RCMP were still investigating the fire and considered it suspicious, but would not elaborate on reasons why.

"At this point we're deeming it suspicious and will continue to do so until we can categorize it and discover the cause of the fire," said Corporal Dave Ritchie of the Squamish RCMP.

Mike Adams has been the assistant fire chief in Squamish for less than two months, but said that career firefighters consider the Garibaldi Estates fire to be the largest in the community in at least 35 years. Not only was it large it also spread quickly.

"It was an older building, wood construction, and there was a common carport that ran along the back for the full length of the building that may have led to the fire spreading so quickly," he said, referring to reports that the fire spread through the complex in a matter of minutes.

The fire was under control by about 6:30 a.m. and fully extinguished by 10 a.m. The overhaul of the site, checking through the rubble for hot spots, took another four hours. By the end, none of the structure remained standing, and it was clear that the residents had lost everything they couldn't carry out of the complex.

All of the roughly 20 residents living in the complex had evacuated before the firefighters arrived. Firefighters were called just before 5 a.m. Sunday.

Once it was established that everyone had evacuated safely the firefighters concentrated their efforts on evacuating the building behind the complex and containing the fire before it could spread. As it was, the heat from the fire caused damage to at least five units of a neighbouring townhouse complex.

"It was primarily the radiant heat, it was so intense and hot from the first structure going up that it melted the siding of townhouses on Willow Crescent," said Adams. "It cracked the windows and burned up the fence. The priority for crews was for the fire not to extend into that building, and we had a hell of a fight on our hands."

Adams is not sure what units had smoke detectors or how all the residents of the complex were alerted to the fire, but they were told that residents were pounding on doors to wake people up and get them out of the house.

The Squamish Emergency Program's Emergency Social Services department responded to the fire right away to provide 72-hour emergency support for the residents of the complex, which included a family with two children. At press time all of the residents are being housed, and a massive drive is underway to raise money for the displaced residents.

Cash donations can be made at Squamish Savings (Branch 81, account #331918), and donations of items for displaced residents, including the children, will be accepted soon based on the needs that have been identified.

Under the B.C. Strata Property Act the complex was legally required to hold fire insurance, although it was optional for residents to purchase additional insurance to cover their belongings and any living expenses related to their relocation after the fire. At this point it's not clear what type of insurance that different residents had, if any.