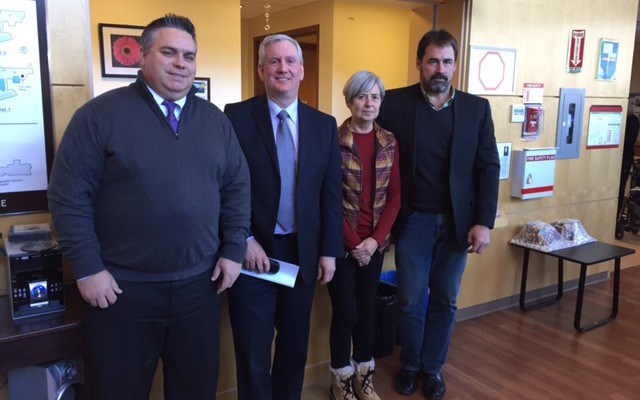 END OF LIFE CARE The province announced funding for a four-bed hospice facility in Squamish on Jan. 3. Located in the Hilltop House, pictured, the centre is expected to open in 2019. Photo submitted

Fundraising for a four-bed community hospice for the Sea to Sky is starting to ramp up.

The Squamish Hospice Society is about $700,000 short of its $2 million fundraising goal, Dr. Judith Fothergill said in a recent presentation to Whistler council.

"What's important to notice here is that the operational costs of an estimated $567,000 a year will be covered by Vancouver Coastal Health," Fothergill said.

"So Squamish Hospice Society is looking to raise the capital costs for renovating this space and creating this specialized area."

Donations can be made at www.seatoskycommunityhospice.ca.

When completed, the facility — to be located between Hilltop House and Squamish General Hospital — will offer professional end-of-life health care for residents of the Sea to Sky.

"Most of us hope that when death comes to us that it will be peaceful, that the symptoms will be well managed and that those who we love will be around us," Fothergill said.

"We hope to support those who can be supported at home in their homes. Our palliative care team goes out of their way to do that with whichever resources are available in each community, but sometimes it isn't possible for folks to stay at home.

"This hospice centre will be a caring place, it will be cost effective — the cost of a hospice bed is only $450 a day — and it will be family-centred."

The hospice will be built by renovating an existing unused space at Hilltop House. The plans include fold-out couches for visiting family members, kitchenette and dining space and laundry facilities, as well as a sacred space/quiet room.

The project has also been named the beneficiary of this year's Dr. Kindree Memorial Golf Tournament (sponsored by One Ocean Expeditions and set for Monday, September 18 at the Squamish Valley Golf Club), as well as the annual Sea to Sky Charity Golf Tournament (hosted by BlueShore Financial, the Pemberton Valley Supermarket and the Whistler Real Estate, and taking place at Nicklaus North Golf Course on Mon., August 28).

The project has already benefited from a $400,000 grant from the provincial Ministry of Health, which is contingent on the beds being available by March 2019, as well as $696,000 from the Sea to Sky Regional Hospital District and $25,000 from the Whistler Health Care Foundation.

"Hopefully our next design phase will be finished in early spring of 2018 and then the goal is to have the beds operational March 2019," Fothergill said.

Head to www.squamishhospice.com for more information.

Whistler Village's lone gravel parking lot will be paved this fall after council recently approved an amendment to its Five-Year Financial Plan.

The amendment will free up $1.2 million from the transportation works charges reserve to complete the work in Lot 5, which includes paving, line painting, improved lighting and the installation of multiple storm catch basins with oil/grit separators to capture runoff.

The project is expected to get underway in September and be completed by the end of October. When the work is done Lot 5 will contain 268 parking stalls in the summer. In the winter, there will be approximately half of that, as the space will be used to dump snow.

Councillor Jen Ford asked if it would be possible to melt the snow in place to maximize parking availability.

The municipality did look at that technology post-Olympics, said general manager of infrastructure James Hallisey, but found it to be too costly.

"It was very expensive to run — in the order of $500 an hour for fuel costs alone, and then maintenance on top of that," Hallisey said.

"For the volume of snow that we put in Lot 5 we estimated some pretty large numbers at that time... but there's more demand for those parking spaces now so it's probably a good idea to revisit that math, but we haven't done that to date."