As the mayor of Squamish, Greg Gardner prides himself on having an open door policy for all Squamish residents.
Apr 16, 2010 7:48 AM By: Gagandeep Ghuman 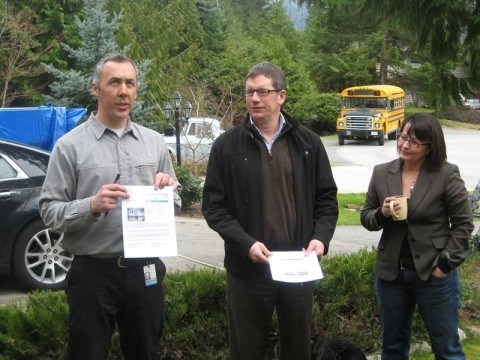 As the mayor of Squamish, Greg Gardner prides himself on having an open door policy for all Squamish residents.

On Saturday, March 20, he extended that to his home, opening it to an energy audit organized by local environmental group, Squamish Climate Action Network (CAN). Along with a certified energy advisor, Luke Dolan, some 15 local residents took a bus to the mayor's home to find out how his house fared on energy consumption and saving.

An energy audit, done by a certified energy advisor, looks into home insulation, windows and doors quality, air sealing, the heating system and water conservation to find whether energy is being wasted and how it can be checked. The energy advisor then comes up with an EnerGuide rating. On a scale of 100, 80 is considered a very good rating.

"When you reduce the amount of energy used in the house, you also reduce the production of greenhouse gases. By bringing your rating to 79, you can reduce emissions by 13.6 tonnes per year," Dolan, the energy advisor from Capital Home Energy, said.

But it's not just about the environment. Besides saving money on your hydro bill, homeowners who upgrade their homes are also eligible for grants under the government's ecoEnergy Retrofit Homes program, the deadline for which is March 31, 2011.

Ana Santos, coordinator of CAN, said the group is hoping the mayor's example will inspire others to open their homes for energy audits and find out how they can save energy and money. Energy consumption in North America is high, Santos said, but there's a lack of awareness on how to contain it.

"We want to spread the awareness that we can do a lot of simple things to make it better," she said.

So, how did the Gardner home do? Not too bad, actually. The windows and the doors were properly insulated, water was conserved using low flush toilets in two washrooms and the air sealing was tight enough to not lose heat. The mayor's home got an EnerGuide rating of 70, which is considered quite good on the energy audit scale.

There were, however, recommendations that Dolan made that would make the Gardner home more energy efficient and push their EnerGuide rating up to 80. His biggest recommendation was the installation of an Air Source Heat Pump, a device that draws heat from the outside air during the heating season and pumps heat out of the house during the summer cooling season. He also recommended a new DC motor for the furnace to make it efficient, along with insulating the furnace from the cold garage.

Then there are the small changes, like turning off or even doing away with the electric fireplace, replacing light bulbs with energy efficient ones, using foam gaskets to cover light switches and plugs.

Gardner's wife, Lila Gaudry, said she was pleasantly surprised at the rating her home received and promised to seriously consider the recommendations.

"These little tips are really valuable and inexpensive and some of them, they take little time to do," she said.