A Squamish Nation signature has been added to a 2010 First Nations declaration opposing oil pipelines in B.C.
Jul 18, 2012 9:00 PM By: John French 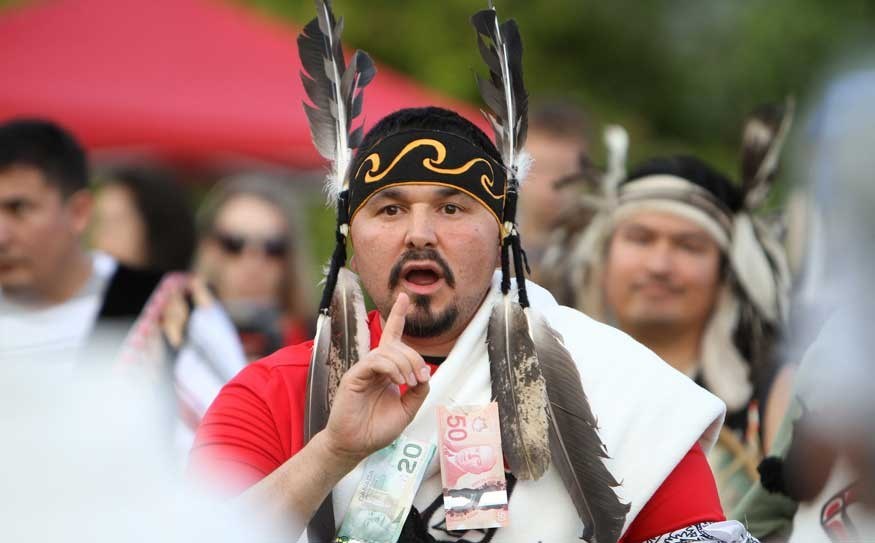 PIPE DREAM Gabe George, Tsleil-Waututh Nation Traditional Speaker, leads a ceremony prior to the Nation's signing of the Save the Fraser Declaration. Photo by James Maclennan

A Squamish Nation signature has been added to a 2010 First Nations declaration opposing oil pipelines in B.C.

The Squamish and the Tsleil-Waututh Nation signed the Save the Fraser Declaration at a high profile signing ceremony at Whey-Ah-Wichen, which is commonly known as Cates Park, on Burrard Inlet earlier this month. The two aboriginal groups joined more than 100 other First Nations groups across the province that have already signed the Fraser Declaration.

The key wording in the declaration indicates: "We will not allow the proposed Enbridge Northern Gateway Pipelines, or similar Tar Sands projects, to cross our lands, territories and watersheds, or the ocean migration routes of Fraser River salmon."

First Nations from the U.S. border to the Arctic Ocean have united in their opposition to the controversial Enbridge Northern Gateway Pipeline proposal between Edmonton and Kitimat.

While the Northern Gateway Pipeline is proposed for an area that is more than 1,000km away from the traditional territory of the Squamish and the Tsleil-Waututh, the two groups are also concerned about Kinder Morgan's proposed Trans Mountain pipeline expansion.

"Tsleil-Waututh stands together with First Nations and all British Columbians who do not support pipeline expansion and increased tanker traffic," said Tsleil-Waututh Nation Chief Justin George in a news release.

"As People of the Inlet, it is our birthright and obligation to care for the lands and waters of our territory. Pipeline expansion is a risk too great to accept."