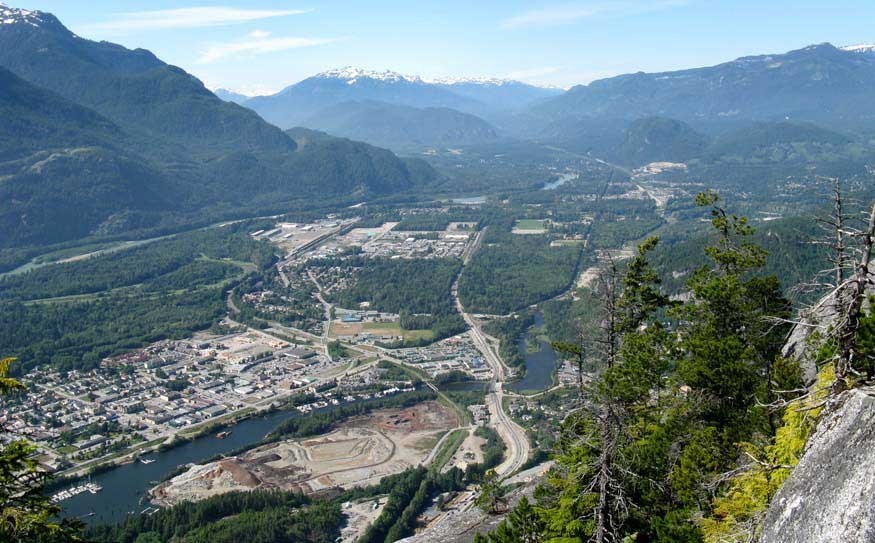 B.C.'s Census Winners Sixty per cent of Squamish's burgeoning population are under the age of 40. The town is an attraction for many young families who need to work in Vancouver but want space and recreation opportunities for their children.

In a nation of 33.5 million people and a province of 4.4 million with a national population growth average of 5.9 per cent, Squamish is turning heads.

The community's population grew by 14.6 per cent between 2006 and 2011, making it the town in B.C. with the largest growth percentage between census periods.

The 2006 census determined that the population of Squamish was just under 15,000 and this time around the number shot up to just over 17,000.

The most significant impact of this growth relates to policing costs. When a community in Canada served by the RCMP reaches a population size of 15,000 it is supposed to start covering almost all of the policing costs for the community.

The District of Squamish (DOS) successfully argued after the release of the 2006 census figures that the community shouldn't pay for more policing costs of a town with a population of more than 15,000 when the province demanded the community cover additional policing costs. The provincial government has been covering the difference, but there won't be any argument over the extra amount now that Squamish has eclipsed the 17,000-population marker.

Squamish Mayor Rob Kirkham said the biggest direct change resulting from the census release is the cost the community will have to pay for policing.

"I can't tell you exactly how much that is but it is going to be a significant number as far as a hit to our budget," said Kirkham. When pressed to offer a ballpark figure of how much of an increase Squamish is expecting to pay for the RCMP Kirkham said he believes the increase will be "in the neighbourhood of three-quarters of a million dollars."

Meeting notes from a Committee of the Whole gathering on Jan. 17 show that Linda Glenday, the DOS general manager of protective and supportive services, suggested to members of Squamish Council that the policing costs might increase by as much as $900,000 a year.

"We're just going into our budget process now so that will dictate how we look at how that fits into our budget," Kirkham said on Friday after MP John Weston announced Squamish was getting $4 million for landfill upgrades. "It is not necessarily going to end up being that much of a hit directly to the taxpayer depending on how we're able to fit it into our budget program."

The size of the local full-time firefighting force may become a topic of discussion in the next set of budget discussions.

In 2008, the Fire Underwriters Survey did an audit of Squamish Fire Rescue and reportedly concluded the staff size should be increased to avoid a change in the community's insurance gradings.

There are currently four career firefighters in Squamish along with a temporary full-time firefighter, a deputy chief and a fire chief. Last year, the force increased its numbers by recruiting 18 new volunteers. Three different people have held the title of chief since 2008 and the deputy chief role has also changed three times since then.

The population further increases the ratio of residents to full-time firefighters in Squamish.

Kirkham said he and others at municipal hall in Squamish anticipated the kind increase revealed by the census numbers.

"There's a lot of excitement and focus on it at the moment because it just came out in the census, but really it wasn't a surprise to us in Squamish," the mayor said. "We knew it was in the neighbourhood of where we were at."

Kirkham said the numbers demonstrate that it was a good justification for the planning being done by the DOS and the recent changes to the Official Community Plan. He added that he is looking forward to continued growth of the population over the next few years.

"I'm convinced that the new people are young athletic family people that are coming to town," he said. "Sixty per cent of our population is under the age of 40 and people are coming here because this is such a great place to raise a family, to recreate and so that's exactly what is happening."

Kirkham pointed to his own family for a prime example of what he believes is a typical newcomer to Squamish. His niece recently moved to Squamish from Vancouver with her husband.

"She works in Vancouver, he just loves rock climbing and they've decided to move to Squamish," said Kirkham.

His niece recently opened a store and he said she is pregnant with their first child.

"That to me is a pretty good picture of what is happening in Squamish," he said.

New council member Ted Prior said last week that he is interested in knowing if calls to real estate offices in Squamish go up following the release of the census numbers. News outlets focused on Squamish in covering the release of census information because the data showed Squamish was the fastest growing community in B.C. in the census period.

The 14.6 per cent increase in population for Squamish between 2006 and 2011 prompted Squamish resident John Jervis, a real estate professional, to express a frustration of his. He suggested percentages muddy the perception.

"For clarity, in five years Squamish grew by 2,200; Chilliwack grew by 9,800," Jervis wrote in an Internet discussion post.

"Time to wear our expensive big boy pants," Coun. Bryan Raiser wrote in response to the note posted by Jervis after the increase in Squamish's population was announced.

While Squamish grew by more than 14 per cent, Whistler increased its population by 6.2 per cent and Pemberton jumped by 8.1 per cent. The Squamish-Lillooet Regional District (SLRD) saw a population increase of 8.4 per cent with most of that growth coming from new births and people moving to the main communities in the Sea to Sky corridor. Lillooet recorded a slight decrease in population.

Area B of the SLRD dropped from a population of 575 to 359. This represents a decrease of 37.6 per cent. Area A, which only has 224 residents, increased in population by 8.2 per cent while Area C dropped from 1,887 in 2006 to a population of 1,804. Area C includes the rural areas outside of Pemberton and the percentage decline equals 4.4 per cent.

Area D of the SLRD includes neighbourhoods like Pinecrest, Black Tusk, Upper Squamish, Paradise Valley, Ring Creek, Britannia and Furry Creek and the population in those communities didn't change at about 840 people.

The total number of people living in the regional district is 38,171, up from 35,225 in 2006. Census information is collected every five years by Statistics Canada.