Officer’s work with youth will continue through scholarship fund
Oct 3, 2008 6:49 AM By: Paul Carlucci 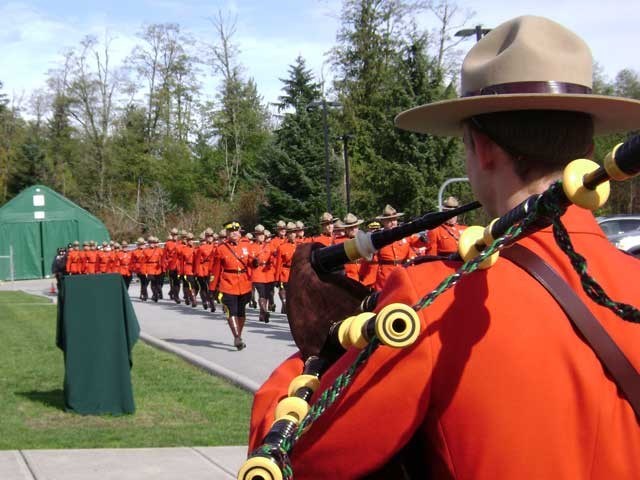 It was March 29, 2002, and Constable Wael Toufic Audi was about to stop an errant vehicle on Highway 99, near Brohm Lake. In the process of making a U-turn, his unmarked car was struck by a bus with brakes later found to be deficient. Audi died.

The Squamish RCMP detachment remembered Audi last week. Mounties donned their red serge and marched around the detachment parking lot after a small battery of speakers took to a podium inside, with many of them praising Audi’s engagement with youth and his lust-for-life attitude. Commemorative items were also unveiled, both inside and out.

“We knew he was unique because the story goes that the new recruit came — and he arrived in a limo,” said Sergeant Joe Schofield. “He always did things in style, and quite often with class.”

Audi was an RCMP officer for five years. His posting in Squamish saw him deeply involved in youth sports, especially volleyball. According to his colleagues, Audi recognized the potential for crime reduction through the creation of a robust youth community. To that end, the Wael Audi Scholarship Fund – Above and Beyond, has been set up at the Bank of Montreal. High on a list of requirements is sport participation, and the scholarship will be awarded annually to a high school student.

Throughout Friday’s hour-long event, those who knew Audi personally spoke of his nature and achievements. At the same time, people who never knew him also vaunted his record.

Constable Gavin Duffy emceed the event. A few days after Audi’s death, Duffy was an RCMP applicant in Ottawa. He saw Audi’s picture on the wall and found it interesting enough to examine. Shortly afterwards, he found himself stationed in Squamish.

“A group of us at the detachment felt it was very important that there was a lasting legacy for everyone here who never had a chance to meet Wael,” Duffy said. “I can’t believe the day is finally here.”

That legacy has a few incarnations in a room at the back of the detachment. Members raised $20,000, money earmarked for the scholarship. To raise further funds for the scholarship, stickers are available, as is a DVD of the day’s proceedings. Inside that room was a carved mahogany replica of Audi’s badge, a project undertaken by an RCMP member from New Brunswick.

“This is truly a national event,” noted Duffy.

Outside the detachment stands a plaque. One side serves as an epitaph for Audi, while the other warns members to practice increased vigilance when driving their vehicles.

“Overall, it’s not that common,” said Schofield of road accidents involving police. “For the amount of time we spend in vehicles, we have the training to handle it. Unfortunately, though, we do have collisions.”

In addition to his efforts with youth, Audi was also recognized for being a representative of diversity. Born in Lebanon, Audi came to Canada when he was a teenager. Once in Squamish, he developed relations with the Muslim community, and Mohammed Asfar, a community leader, spoke to the assembly.

“I spoke to Wael’s parents a few days ago, and they asked me to express their thanks to the RCMP for this ceremony,” he said, noting Audi’s parents stayed in Toronto, where they’re currently fasting for Ramadan.

Dan Seward was Audi’s watch commander, and he remembers fondly the cultural component of his friend’s identity.

“He brought multiculturalism to policing in Squamish,” said Seward.