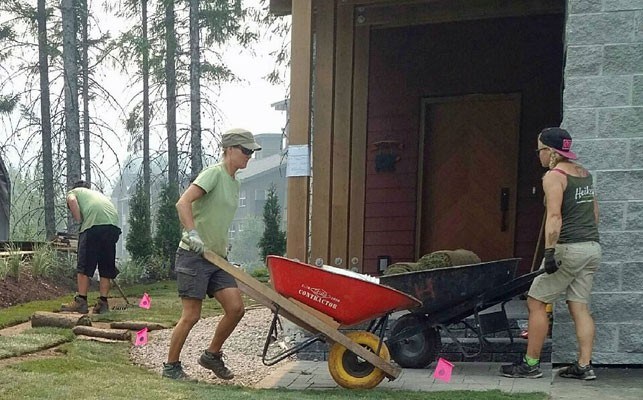 Getting coffee last week at one of her go-to coffee shops, Whistler Chamber CEO Melissa Pace had a somewhat disquieting conversation.

"The girl behind the counter said to me she's working 30 days this month because they don't have enough labour coming," Pace recalled.

"I'm a regular coffee drinker there and I know them very well... I said, 'Would you mind if I helped you?' She had all these pastries lined up on the back counter and she was the only one there, and she had 15 people in lineup.

"She said 'if you could help me, I'd love you'... I was getting ready for work, and I got behind the counter and put out the pastries."

As Whistler continues to put up record-breaking numbers year round, finding and retaining workers is not getting any easier for small businesses.

While some employers — most of them large corporations with ample resources and staff housing — are doing well recruiting, the story is different for most, Pace said.

"As CEO of the chamber I take it so to heart that these businesses are struggling," she said. "My family, we're small-business owners — when my father was in Whistler, he owned a small business. I know exactly how a small business runs, I know how important labour is, and our community is working hard. They're working overtime."

Heike Stippler of landscaping company Heike Designs said one of the effects of Whistler's labour shortage is that applicants come into job interviews with more leverage than they used to.

"I've noticed over the years of doing this, it seems like (applicants) come with different expectations and require a lot more flexibility on my end, " she said. "People don't just work for the full season anymore. They come to Whistler to enjoy and some are here full-time and want to work all the time, and some come and expect to be off for weeks here and there."

"As a result of that we'll be submitting a joint letter to (federal Minister of Employment, Workforce Development and Labour) Patricia Hajdu on (housing and labour)," Pace said. "It's always top of mind for us, because it's top of mind for our business community."

In his mandate letter to new provincial Minister of Labour Harry Bains, Premier John Horgan listed a registry of Temporary Foreign Workers (TFW) as one of his priorities.

The registry's goal would be to help protect vulnerable workers from exploitation.

Asked to provide more information, a ministry spokesperson said it was still early days and more information would be available as the framework for the registry is developed.

Without more details about the registry it's hard to say how it may impact employers, but dealing with the TFW program is onerous enough as it is, said Jenny Perez, managing director of Perez McKenzie Immigration.

"The program is very demanding for employers in terms of the amount of documentation that needs to be completed as well as the recruitment/advertising evidence that they need to provide," Perez said in an email. "It can be a very time consuming process for employers, and there will be new recruitment requirements as of August 28, 2017, which may be well-intentioned but that will require even more work and will probably represent more costs in terms of advertising efforts."

Employers are also being subjected to more audits, Perez added, though she commended the government for allocating more resources to conduct them properly.

Even though the process is time consuming, the main concern for Whistler businesses is still the challenge of finding suitable staff, she added.

"If anything, the willingness of employers in Whistler to hire and support temporary workers has only increased throughout the years, as the benefits of retaining staff far outweigh the time and work required to do so," she said.

It's hard to say what the registry might mean for recruitment in Whistler at this point, Pace said, but the local chamber supports it in principle.

"I think we support the collection of the registry information and it's going to drive better provincial decisions... that's the intention of it," she said. "But we're a bit weary about B.C. duplicating data that's already being collected in Ottawa — that's where our concerns are."