Standup paddleboarding with a cause 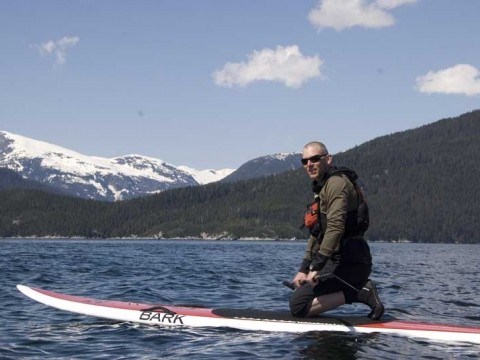 It's the longest trip ever attempted on a standup paddleboard. And it's intended as a protest against a proposed pipeline that will stretch from the oil sands in Alberta to the lush rainforest along the north coast of British Columbia.

But Norm Hann is up for the challenge.

On Saturday, May 8, the 40-year-old Squamish resident departed from Kitimat on his 300 kilometres trip to Bella Bella.

His send-off at the docks that morning was picturesque. The spring sky glowed blue and the water twinkled as Hann made his way towards snow-capped mountains to the south. Underneath him, in the waters surrounding the rainforest, schools of fish circled the channels and seaweed floated in large clumps.

Now, over the next 11 days, he is following the route that oil tankers could take through the Great Bear Rainforest once Enbridge Inc. installs its Northern Gateway Pipeline.

His only mode of transportation is a standup paddleboard, although he also has friends in boats carrying supplies. And while Internet along his route is sporadic, he is carrying a satellite phone to send updates.

"They have been really lucky," said Hann's partner, Jen Segger, on Tuesday morning after getting the latest update on the voyage. "The winds have been in their favour and they have had blue skies everyday. Other than some big distances and a lot of time in the water, Norm is amazed with how smoothly things are going."

Hann was first acquainted with the Great Bear Rainforest 10 years ago, when he moved from Ontario to King Pacific Lodge to work as a wilderness guide. He also spent a significant amount of time with the First Nation group at Hartley Bay. The people at Hartley Bay now call him "T'aam Laan," or Steerman of the Canoe.

"I have learned that what is here - the traditional food harvesting areas, the wildlife and the philosophies of living in harmony with the Earth - are something special that cannot be lost," Hann said about what spurred him on to protest the proposed oil tanker route.

"I feel indebted to what this amazing place has provided me with and I cannot imagine a people, with thousands of years of connection to their land, not having this way of life."

So what prompted Hann to launch his protest through standup paddleboard?

"When Norm found the sport, he totally fell in love with it," explained Segger. "He is a past kayak guy, but this is the new thing for him. He finds it so much easier on the body, as opposed to sitting cramped up in a kayak."

Hann has been talking about doing a standup paddleboard expedition to support a cause for two years. This winter he returned to Hartley Bay and realized the issue of the pipeline would be his driving force.

The Northern Gateway Pipeline is a $5.5 billion project that would see a 1,170 kilometre oil pipe built from near Edmonton to Kitimat. According to Enbridge Inc.'s website, the pipeline would carry about 193,000 barrels of condensate (liquids produced by natural gas fields) per day.

Hann said the pipeline will bring 225 oil tankers every year to B.C.'s coast line to transport the oil to Asia.

As demonstrated by the oil spill in the Gulf of Mexico, an accident of any kind along B.C.'s coast would devastate marine species and their habitat while comprising the way of life for coastal communities and economies in B.C., he wrote in his press release.

Hann planned his trip for May to coincide with the wild salmon migration and the First Nations harvesting seasons for herring eggs, crab, halibut seaweed, sea cucumber and wild salmon.

The longest span he will travel in a single day is 45 kilometres, although he also has several 35 km and 25 km days scheduled to complete the journey in his tight time frame.

"Standup paddleboard is a great way to raise awareness because it is a new sport," added Segger. "It is getting a lot of attention, it is unique, and something like this has never been done before."

Meanwhile, back in Squamish, Segger has been raising awareness of Hann's trip by getting in touch with the media and updating the official blog at mountainsurfadventures.blogspot.com.

"Everything has been very positive," said Segger.

"It has attention from CTV and Global, and I got e-mails from Greenpeace yesterday. Also, the number of people who are following him on Facebook is so many that we don't eve know who they are, but they are from all over B.C. and down into California."

Schools throughout British Columbia are also following the protest, said Segger. A group of 29 kids from North Vancouver recently made posters for Hann.

"The big message Norm wants to get out there is to encourage people that if there is something they really believe, to do something about it to make a difference," said Segger.

"The main message he keeps saying is how overwhelmed he is with the support that is coming in, and he sends a big shout out to everybody who is e-mailing and sending their best wishes."