Steady increase in building applications to muni hall since 2010 Games

Council to get quarterly updates from building and planning departments
Apr 29, 2015 6:00 PM By: Alison Taylor 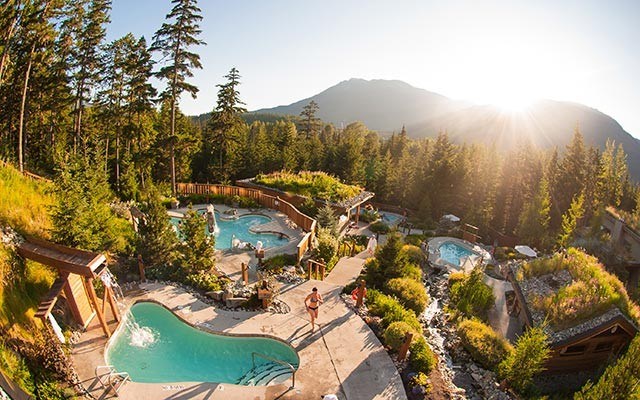 More space for spa Scandinave Spa is adding a new, larger solarium to its property on the west side of the site. photo submitted by Scandinave Spa

With an early spring in Whistler this year, it's not just biking season that is off to a quick start.

The construction industry is also gearing up for another busy year.

"The building department has seen a steady increase in building volume each year post Olympics," wrote the municipal communications department.

On Tuesday night, council found out just how busy it is in the first of its quarterly public reports on the work being done in the building and planning departments. This is the first time council has had updates of this nature. It made the decision to request quarterly updates at the strategic planning retreat not long after November's election.

"We just wanted to be more aware of the amount of business that was going on in the community and to help the community be aware of how much business is going on at municipal hall," said Acting Mayor Andrée Janyk, adding that it was designed to bring more openness and transparency to local government.

The first quarterly report shows there were 1,075 new files in the building department in 2014 — 305 of those were new building permit applications.

There were also applications for plumbing permits, fireplace permits, demolition permits and information requests among other things.

"Needless to say, the building department was very busy," said Mike Kirkegaard, Whistler's director of planning, who presented the report to council.

And it's not slowing down.

In the first quarter of 2015, there have been 233 new applications. Of those, 55 are building permits.

Meanwhile, the planning department saw 252 new applications in 2014, the bulk of which were development permits (79), liquor licences (37) and rezonings (25). Of the total amount, 169 were approved, three denied, 23 withdrawn and 57 are in progress.

To date in the first quarter of 2015 there have been 62 new applications in planning.

Councillor Jack Crompton said it would be helpful too to know about those applications that are taking longer to move through municipal hall — ones that are lapsed or suspended.

"We do have files in that category," said Kirkegaard.

"Those would not be reflected in those numbers."

"This is an overwhelming amount of work," he said.

He thanked staff in the two departments for their courteous, professional and efficient work. While a handful of files with stumbling blocks make it to his desk, the vast majority do not.

The building and planning departments, said Furey, keep the business of the community going, welcoming investment.

He later added: "What was demonstrated by the report is that we really have been meeting and exceeding my staff expectations."

This is the final piece of the old Mt. Whistler Lodge subdivision site, effectively marking build-out of the site of 164 bed units, with one remaining bed unit leftover.

A development permit, approved at Tuesday's council meeting, will allow the owner to build the eight-units including various setbacks on the property.

The site is located on the north side of the Hillcrest Drive cul-de-sac between the existing employee housing and Alta Vista Point II.

The townhouse variances were first approved in June 2009, but the development permit expired after two years.

The municipality has also asked for the architectural and landscape plans to be finalized.

Scandinave Spa to get bigger

Scandinave Spa is getting a new solarium to complement its existing facilities.

Council approved a larger building on Tuesday night, including a height variance, which will see a three-storey building developed on the site.

"The solarium was originally intended to be a two-storey building with employee housing on the lower level and a single large solarium on the main floor," wrote municipal planner Amica Antonelli in a report to council. "Due to the success of the existing solarium, sauna and steam rooms, the applicant determined that a larger building with three floors would better serve the business."

Eight buildings were originally approved in the Scandinave's development permit. Six have been built to date. This seventh building will include a sauna and steam rooms on the main floor, multi-use rooms on the upper floor, plus a large deck, and two employee-housing units on the lower floor.

The maximum height has been varied from 5.7 metres to 8.09 metres. The larger building remains within the maximum density allowed on the site.

"To my knowledge, this will be the final stage," said senior planner Melissa Laidlaw when asked about the eighth building. "They're pretty much maxed out on their density at this point with their zoning."

Several units at the Pinnacle Ridge townhouse development are getting a facelift including more floor space.

Council approved plans for small renovations to five units in the 44-unit townhouse/duplex development on the Blackcomb Benchlands.

The renos are consistent with the Blackcomb Land Use Contract regulations as well as council policy.