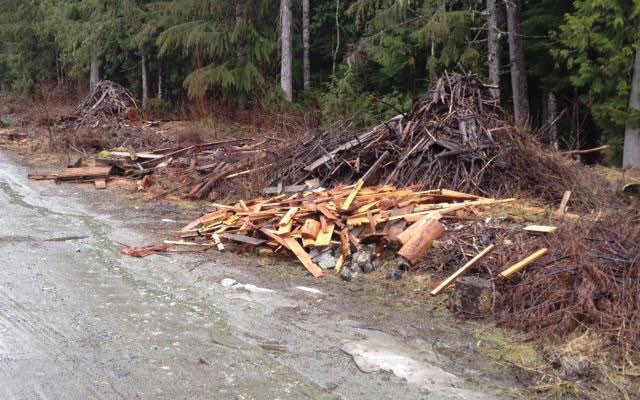 The president of the Pemberton Wildlife Association (PWA) is calling on the community to stop illegally dumping yard waste on Crown land.

Allen McEwan said while some people may not believe they're doing the wrong thing — throwing organic waste back into the ecosystem — the PWA has major concerns about this ongoing activity.

"They don't see it as being harmful and to a large respect it isn't, except for the invasives and the fact that it brings on other garbage," said McEwan, a longstanding member of the PWA, a non-profit organization aimed at promoting conservation, preservation and enhancement of wildlife and outdoor recreational resources.

"And, it's unsightly as hell... Allowing people to dump yard waste there leads people to believe it is a dump and so next think you see is appliances and all sorts of other junk dumped down there and that's happening as well."

There is one area of particular concern — the Greek River Forest Service Road.

"This is the favourite one because it's the closest one to town, the closest forest service road where you can just get out into the woods and get rid of your garbage without anybody noticing," said McEwan.

He took his concerns to the board of directors of the Squamish-Lillooet Regional District (SLRD) in January.

He wasn't the first to raise the matter and he found the board willing to listen and do something about it.

SLRD expanded the hours of the Pemberton Transfer Station and also agreed to post anti-dumping signage.

Area C director Russell Mack was recently out with staff, scouting for prime locations for six new "No Dumping" signs.

"There's all kinds of stuff going out there — mattresses and appliances, construction/renovation debris."

Mack said enforcement needs to be stepped up to address the problem.

"We need more enforcement from forestry; that's the name of the game," he said.

Compounding the problem is that the fact that the transfer station in Pemberton does not accept yard waste.

"There's no excuse for dumping it out in the bush but I think we as a government, we need to make it easier for people to get rid of their stuff in one central location," said Mack.

The PWA is encouraging people to take their yard waste to Sea to Sky Soils, the composting facility near Rut[p-p[]p-[herford Creek.

Sea to Sky Soils will accept the yard waste for a fee — $5 for very small loads. Its prices are the same as Whistler's.

"There's a common misconception, that facilities like ours need this material," said Jaye-Jay Berggren, director and operator of Sea to Sky Soils.

"It comes at quite a significant cost for us to process it. We have to grind it first, then compost it, then screen it."

In the end, however, Sea to Sky Soils transforms the yard waste as well as food waste into organic soil.

McEwan added: "It's just a matter of being accountable for your own waste. Find a way to deal with it yourself. It's not appropriate to dump it on Crown land."