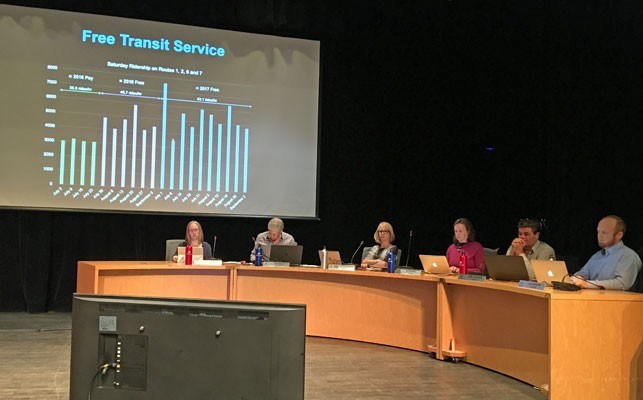 Results from Whistler's summer Transportation Action Plan are in, and the Resort Municipality of Whistler (RMOW) is calling it a success — but the full weight of the negative impacts has yet to be fully measured.

In a presentation to council on Sept. 19, transportation planner Richard Drdul outlined the positives.

"In terms of the action plan (and) the things that were done for the summer, it was successful," he said, pointing to increased transit ridership and enthusiasm for the bike valet services offered.

"And in terms of parking, the day lots were significantly improved. You could actually find a place to park in the day lots now pretty much every day of the summer, which is a huge improvement from last year."

Parking in the village lots would have been equally successful if not for some serial "overtime" parkers, and the free lot at Creekside was almost empty on most days, Drdul added.

But how much of that increased availability is due to people parking in residential neighbourhoods, like on Eagle Drive in Whistler Cay Heights just across from the village, remains to be seen.

"We heard anecdotally about people still driving and parking in other places, like adjacent neighbourhoods," said Mayor Nancy Wilhelm-Morden. "Was there any measurement of any of that, or did that information come too late in the day?"

Those neighbourhoods weren't surveyed this time around, said general manger of infrastructure services James Hallisey, but the impact will be something to look at.

"There's a bit of a balance there that we need to address," he said. "Maybe there are some specific measures we can take in those locations and look at that in a little more detail as we move forward."

There was also some stress about commercial bus parking on Blackcomb Way, but the issue was resolved as of Sept. 1, Drdul said.

"Most buses went up the hill to lot 6," he said, noting that the lot averaged eight buses a day.

"We got good usage... and I know the municipality is working and looking at other options to accommodate the buses next summer."

In monitoring the impacts, Drdul conducted the same parking study that was done last summer, focusing on key areas throughout Whistler on two busy summer weekends: the B.C. Day long weekend and the weekend right after Crankworx.

While highway traffic at Brio remained relatively stable with 2016, availability in the day lots was noticeably increased.

"Last summer, on the long weekend, the day lots were filled, and the village was pretty much full. You couldn't find anywhere to park," he said.

"Much better conditions," Drdul said. "If you wanted to park your car on the long weekend, this summer was a much different experience than last summer would have been."

Another big change was seen in how late the lots got busy, as the morning rush for free parking was gone.

Drdul recommended the RMOW look at changing how it sells parking passes, switching from a monthly pass to one with a set number of uses.

"The problem with a monthly pass is once you've bought that pass you have every incentive to drive as much as possible and get the most value out of that pass. You're not going to consider taking transit or something one day because you've got a parking pass," he said.

"If you had a pass that was valid for a certain number of times, and you could use it when you wanted, you might then consider other options."

Free transit ridership averaged 5,390 on Saturdays, 4,650 on Sundays and 3,930 on holiday Mondays (compared to an average of 4,680 free riders on Saturdays last year).

A total of 1,385 bikes were checked in to bike valet services over the 16 days offered for an average of 87 bikes a day.