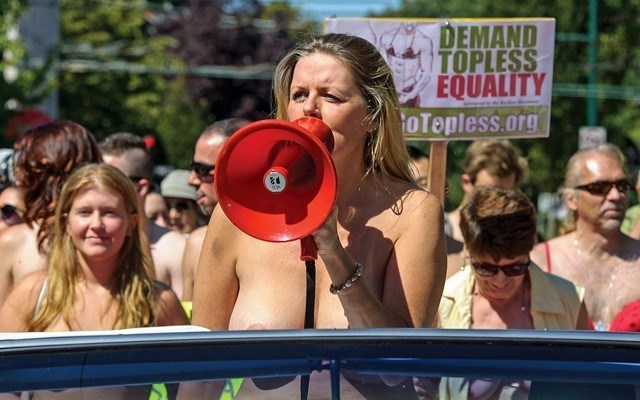 March organizer Denise Belisle at a topless march in Vancouver. The peaceful protest took place in Whistler for the first time on Sunday, Aug. 25. FILE PHOTO BY WARD PERRIN / COURTESY OF THE VANCOUVER SUN

I am writing in response

Whether you've seen this or not, men have the right to take off their shirts at any time, anywhere, except in businesses as otherwise posted for sanitary reasons. Women do not have this right, as power structures and organizations prevent them from doing so. Why? Because breasts are sexual? Who made them that way? Not the infants that feed from them. Not the women that have them.

Toplessness and nudity are not inherently sexual. However, when it is socially acceptable for a man to be topless, but not for a woman, the message becomes that the female body is different and deserves to be sexualised. In 1920, the women who marched were told they were the equivalent of prostitutes to display themselves in such a way in public. Those women were fully clothed but were sexualized in an attempt to diminish and demonize their message.

This march and these types of protests are designed to help us question the beliefs that keep oppressive power structures and ideas in place in our society. There is definitely a great deal of pressure on youth today of all genders to share sexually explicit images of themselves. However, to be clear, it's not nudity (think getting in your shower) that's the issue. It's the sexualization of nudity that is the problem. This social construct has also taught our youth that sexuality is the only way to intimacy, driving them to share provocative images with one another.

Would I want my mother, sister, daughter or wife to participate in this march? Absolutely. I'll also invite my father, brother, son and husband to come with us. The more people, the better. The aim of the march is to draw attention to the fact that breasts are seen and treated differently than bare, flat chests.

Ironically, it is opinions like McKellar's that will keep the march coming back to Whistler for 10 years. In the Pique's article from Aug. 20 ("Topless march planned for Whistler"), the organizer explains that the reason the march left Vancouver is because it had become "less of a big deal." As soon as bare-chest equality is achieved in Whistler, there'll be no reason to march here anymore. I, for one, am looking forward to a bigger turnout in 2020.