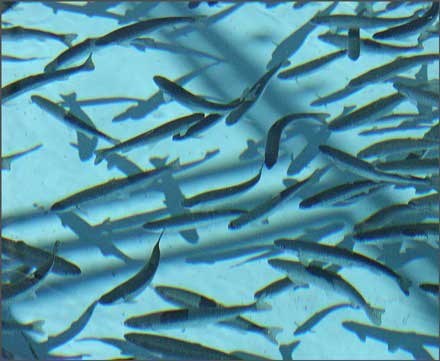 One of the batches of steelhead that will be released from the Tenderfoot Hatchery next month. Photo by Maureen Provencal

About 100 steelhead smolts will undergo surgery next week, the better to track their ocean-going journey as they’re released over the next four weeks into the Cheakamus River.

As part of the Cheakamus River recovery program 100 of the 20,000 steelhead raised in two batches at Fisheries and Oceans Canada’s Tenderfoot Fish Hatchery near Squamish and the province’s Fraser Valley Fish Hatchery in Abbotsford will have acoustic monitors sewn into their bellies. The surgery is part of an effort to track their progress over their first nine months in the wild.

Next week a team of biologists contracted by the Ministry of Environment will work in tandem to anesthetize the fish one at a time in order to perform the two-minute operations to insert the 9 mm X 24 mm receivers.

“It’s a pretty complicated procedure,” said Nanaimo-based biologist Melinda Jacobs. It involves fully anesthetizing the fish, flipping them on their backs in a tray designed for steelhead, making belly incisions, placing the tags, stitching them up and putting them in a recovery bath for 10 minutes.

Jacobs works for Kintama Research, the company contracted by the province to do the work, and said she and her colleague have previously completed about 2,000 similar fish surgeries.

The monitors will allow scientists to determine how long steelhead spend in the river, says one of the project’s leads.

Don McCubbing said fish that decide to leave Cheakamus River can be tracked to about the north end of Vancouver Island in the first three months of monitoring. But McCubbing thinks the real data will be found in the Cheakamus River.

“What they (scientists) are hoping to do is to look at the percentages of fish that don’t leave the river,” McCubbing said, explaining that some fish “residualize” or decide not to head to the ocean, placing stress on other species in the river.

“That’s not good for the other fish because the fish that residualize tend to be larger males and they become piscivorous so they eat other fish as their primary diet,” McCubbing said. “When, following the CN spill, you’ve got fish under stress as it is we wouldn’t want to put any other stress on that population.”

Raised at two hatcheries, the steelhead smolts are the result of a contentious debate between provincial biologists and independent scientists who argued last year about how best to recover fish stocks in the Cheakamus River after the August, 2005 Canadian National Railway derailment and caustic soda spill killed 500,000 fish in the river. After a public debate in the media between the two factions, the Ministry of Environment approved a one-time steelhead recovery program, paid for by CN, to raise steelhead smolts for release into the river.

Offspring of 20 pairs of steelhead caught last summer by volunteers, the 20,000 smolts have been raised over the past eight months at the two hatcheries and are approaching the desired 80-gram weight needed for release.

Fraser Valley’s hatchery manager said the steelhead are unlike any others they’ve raised.

Now weighing about 60 grams, the smolts have a strong sense of flight and bolt away from light and moving shadows, both hatchery managers have noticed. Larson said hatchery staff added extra cover for the skittish smolts.

Periodic releases of the steelhead, including those with acoustic monitors, will take place over the month of May. Abbotsford fish will be released further up the Cheakamus than Tenderfoot’s supply, in an effort to allow a deeper imprinting process.

Tenderfoot’s steelhead will be released by opening hatchery pen gates, allowing the fish to leave on their own volition. Campbell said staff will know it’s time to release the fish once the steelhead start to lose scales and turn silver.

“And they start acting funny in the ponds, looking for ways to get out,” he said.

Only three smolts have been lost while being raised by hatchery staff in the past eight months.

Larson noted the same of the 10,000 smolts raised at Abbotsford.

“They seem really happy,” he said. “I’ve heard no complaints.”